Yes it’s all about reliability. The thing that makes a commercial software stands up and stick to people’s mind. I think the statement is self explanatory but to provide an example, if Google was buggy, it was not the first search engine that comes to everybody’s mind 😉.

The first key in having a good software is having a good development process. At #matelso we are committed to provide an efficient and reliable digital experience platform as a SaaS. Therefore in today's article, I want to write about how I keep my DevOps routine clean, fast, reliable and efficient using build automation tools.

This article is not a tutorial nor the explanation on DevOps. It's just my approach to tackle building and deploying software component which in my opinion is good enough but might not be in yours. All in all, there might not be a perfect solution to this challenge so let's share our thoughts and experience to learn and improve our knowledge. Don't hesitate to criticize or support my opinion.

Remark: This article is meant for intermediate to advance programmers who are interested in cloud based software engineering.

In the world of microservice software architecture, every component of a software is a standalone project. Therefore it needs to go through the whole development and operation chain as shown in the famous DevOps picture below: 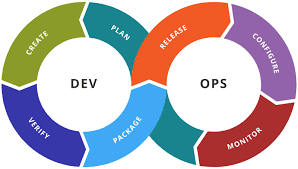 Doing it all by hand sounds quite cumbersome and being honest who likes to do that? 😢
Nah, we are programmers so we should be able to do better. Let's automate it 💪.

General tools that I use for automating the process

My daily tech routine is quite simple. I code on my windows laptop, commit to git repository, push my git repository to GitLab and from there run my CI/CD pipeline to build, test and deploy my code. However, the key point in this routine is the CI/CD script that I run. This script can get long and unmaintainable if you decide to use only shell scripting, which I was also using even recently, but that's the exact reason why I switched to build automation tools. If you wanna see how, continue reading ;)

...Is in fact a software that builds your software. I know it might sound complicated at first :) but it's fairly simple.

When we talk about building a project, in today's world what we really mean is "dockerising" that project which is the process of creating a docker image out of your compiled code which can then be run on any container runtime such as docker-compose or Kubernetes.

Of course that is not all and a CI/CD script might include other routines such as QC, test, publish packages and etc. We refer to all of those as CI/CD stages.

My projects are mainly C# web projects which then require following stages to go on production:

Each of these stages require different tooling and environment. For example the build stage involves docker CLI command while the pack stage needs dotnet CLI and the rollout stage needs Helm and Kubectl. Therefore, integrating all these stages in shell scripts are not that easy all the time. With build automation tools you will have a wrapper around the shell commands which can also ensures the correct environment for that particular stage. Let's see how much the script can differ while using or not using these tools.

Let's take only the build stage into account. This is a glance of what I've been using in the past:

As you see the script is fairly long for only building an image and worse that that, it involves logics that gets out of control really fast like dealing with git tags. If any of my colleagues read this, they'll remember that pain :)

For that I use NUKE execution engine which I forked and modified based on my own tastes and use cases. Here is the link to their repository that you can check it out https://github.com/nuke-build/nuke

I named it SKBA as in Sky Build Automation :) and up to today I don't have any plans of releasing it as open source and I more like to find commercial collaboration for this evenings project of mine. Here is what I could achieve using SKBA:

As you can see with one single command it takes care of building, tagging, versioning and pushing my docker images to the container registry of GitLab. Isn't that interesting 🥳

Additionally, it brings many security enhancements as well. For instance, the first command in the old school approach is docker login command with an argument to pass a plain text password. This approach is not secure and even creates a warning by docker CLI. In the cleaner approach however, there is not foot path of authorizing or any password. All is being handled by SKBA software.

Here is how the logs from this job looks on GitLab: 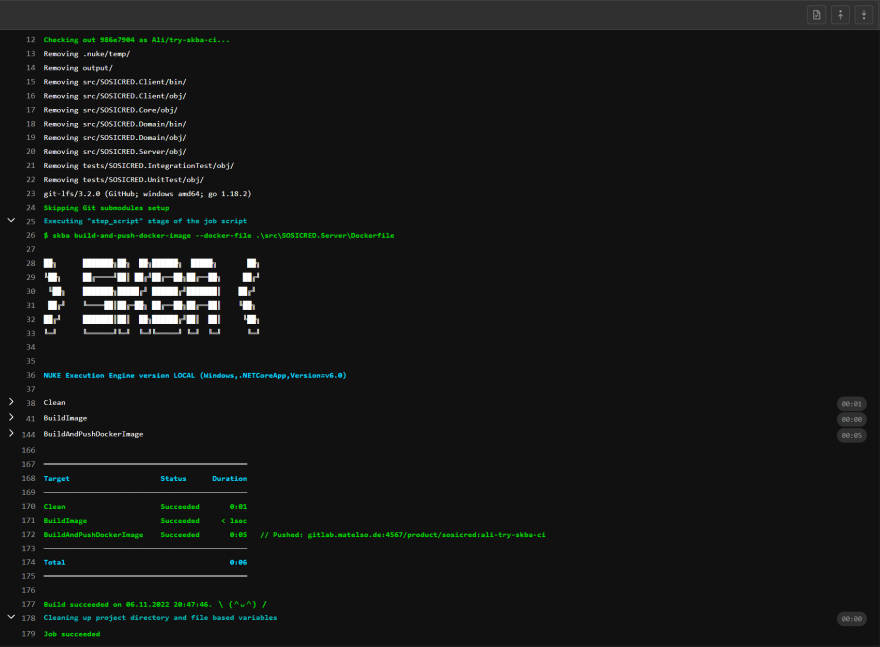 As you see it even comes with GitLab theming integration where you can collapse the log of a stage plus the summary of what went well and what went wrong in the end.

Well as I mentioned, my CI/CD script includes 5 stages and for all of these stages I only fire a single command of the SKBA tool which minimal number of arguments. As an example, here is the stage that pack and publish all NuGet packages of my project:

Again the cool thing is that I don't need to be worried about the version of my packages as it will be intelligently determined based on the last version that is published, the git version and the branch that runs the pipeline.

I am planning to add many more features to this tool. Things like sending notifications by email and chat message as well as publishing change log and release articles for the project. Integrating it into Jira workflow is also one my dreams as it replaces some of the manual work I need to do in my daily job. So far I got the initial required set of features implemented in SKBA and I'm very happy with it.

One remark that is worth mentioning, is that I will always keep this tool tailored to the tech stack of my choice which is Git, GitLab, Dotnet and Kubernetes. I think it's quite a lot of work to come up with something general that works with every DevOps tech stack. Every team may build one of these tools for themselves.

As I mentioned earlier, I am not planning release open source version of SKBA, however, I am very interested in collaborating on similar tools if you decide to build one for your own. If you use a different tech stack and still want to integrate build automation into your continuous development routine, we can talk and I can help you with building one. If you have a team that uses similar tech stack as mine, and you want to try SKBA, feel free to contact me and we can talk.

In this article I demonstrated how I made my DevOps routine cleaner and more eloquent by using build automation tools like NUKE. I mainly wrote about building and packaging stages of a CI/CD pipeline while there is more to that. If this sounds interesting to you, stay tuned for my future similar articles on the deployment stage using Kubectl and Helm.

I hope you enjoyed following along with my journey and learn something new. Stay tuned for possible and probable future parts of this article including more challenges and their solutions.

A Guide to Successful DevOps in Web3

Once suspended, frzmohammadali will not be able to comment or publish posts until their suspension is removed.

Once unsuspended, frzmohammadali will be able to comment and publish posts again.

Once unpublished, all posts by frzmohammadali will become hidden and only accessible to themselves.

If frzmohammadali is not suspended, they can still re-publish their posts from their dashboard.

Once unpublished, this post will become invisible to the public and only accessible to Mohammadali Forouzesh.

Thanks for keeping DEV Community 👩‍💻👨‍💻 safe. Here is what you can do to flag frzmohammadali:

Unflagging frzmohammadali will restore default visibility to their posts.