Hello everyone, I am a DataOps Engineer at FreshBooks. In this article I would like to share my experience on configuration best practices for GitHub actions pipelines for linting.

Freshbooks DataOps team has a linter configuration that developers can run before submitting a PR. We had an idea to integrate lint checks into our regular CI/CD pipeline. This adoption would eliminate potential errors, bugs, stylistic errors. We will basically enforce the common code style across the team.

FreshBooks uses GitHub as a home for our code base, so we would like to use it as much as possible. Recently I finished this configuration so the linter and its checks are now part of a GitHub actions CI/CD workflow.

This article has two major parts: the first one is linter configuration, and the second one is GitHub workflow configuration itself. Feel free to read all the parts, or skip some and jump into specific one you are interested in.

Here are the linters and checks we are going to use:

Disclaimer: author assumes you are familiar with the above-mentioned linters, tools, and checks.

I would like to share how to configure them for the python project. I prepared a full github actions python configuration demo repository.

We use flakeheaven as a flake8 wrapper, which is very easy to configure in one single pyproject.toml. The whole pyproject.toml configuration file can be found in
a demo repo. 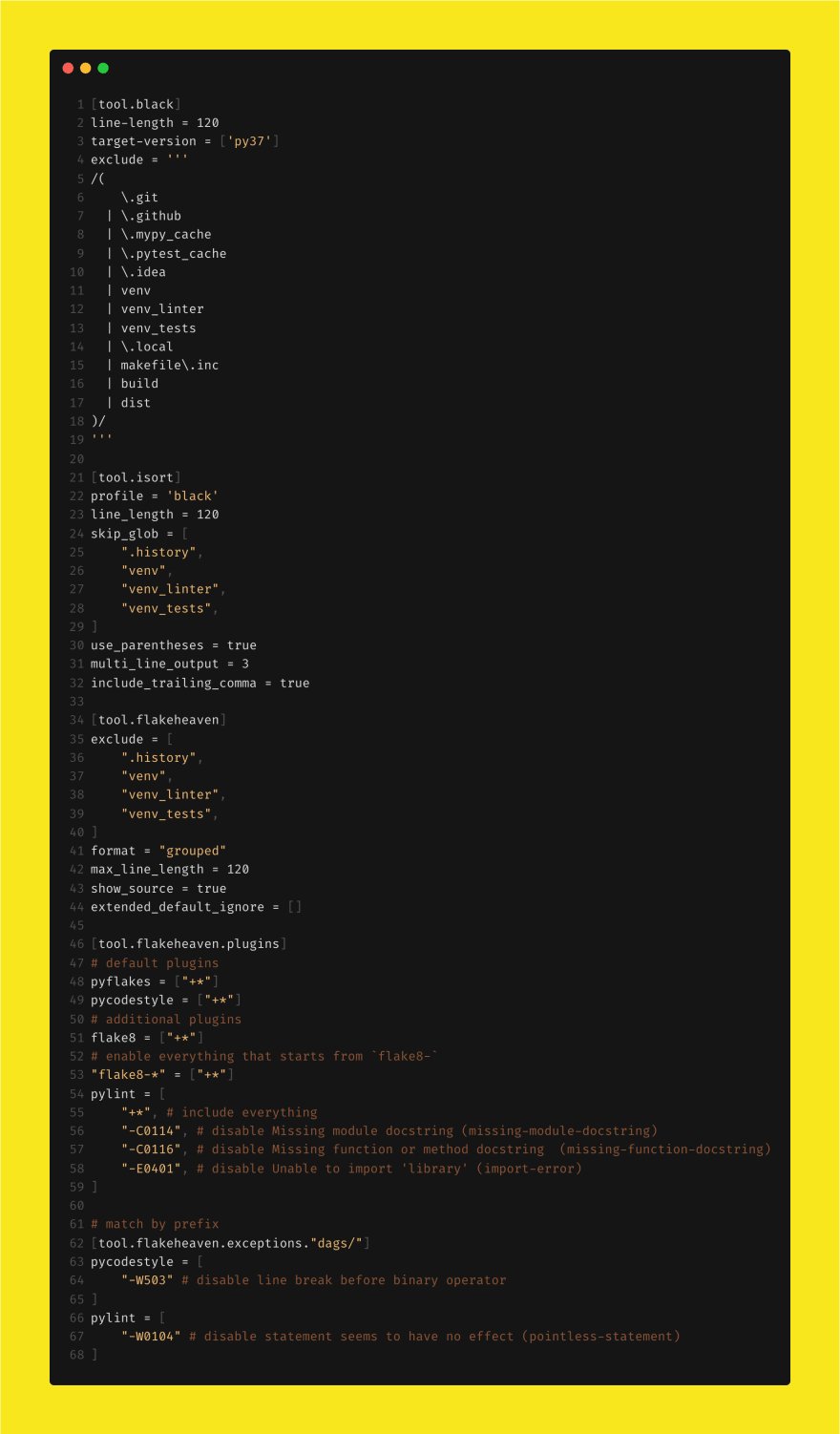 I would say the config file is self-explainable, so I will not stop here for long. Just a few notes about tiny tweaks.

A few checks that we don't want to see complaints about:

The default flakeheaven configuration assumes every component is documented.

Our linter requirements live in a separate file and we don't aim to mix it with our main production requirements. Hence, linter would complain about import libraries as linter env does not have production libraries, quite obvious.

So we need to disable E0401 check from pylint.

We assume that the developer who writes the code and imports the libs is responsible for writing reliable tests. So if the test does not pass it means that it's something with the import or code (logic) itself. Thus, the import check is not something we would like to put as a linter job.

Also, there is another possible solution to disable this check by including # noqa: E0401 after the import statement.

To configure code for Airflow DAGs there are also a few tweaks. Here is the dummy example dummy.py. 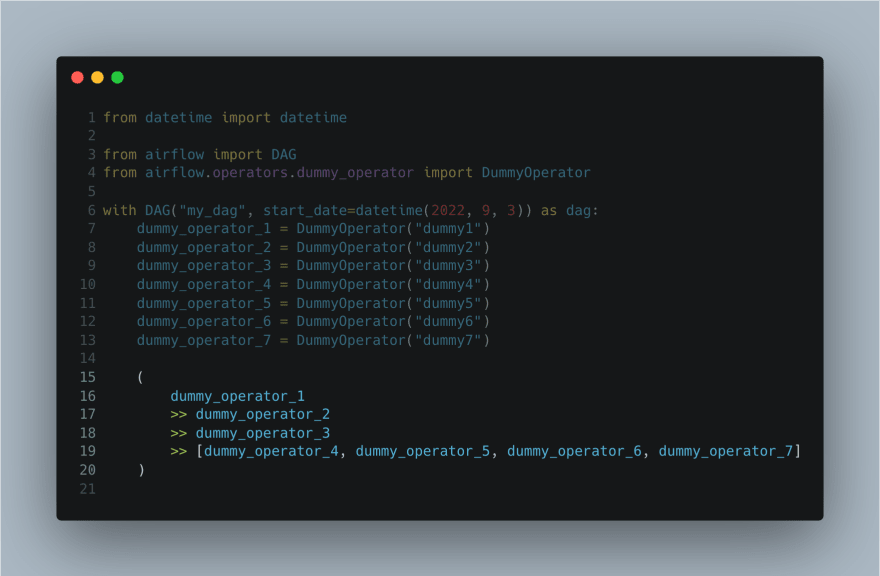 If we run flakeheaven with the default configuration we would see the following error:

However, we want to keep each task specified in a new line, hence we need to disable W503 from pycodestyle.

Next, with the default configuration we would get the next warning:

This is about how we specify task order. The workaround here is to exclude W0104 from pylint.

More info about rules could be found on flake8 rules page.

Disclaimer: author assumes you are familiar with GitHub actions.

We configure GitHub Workflow to be triggered on every PR against the main (master) branch.

The whole py_linter.yml config can be found in a demo repo. I will walk you through it step by step. 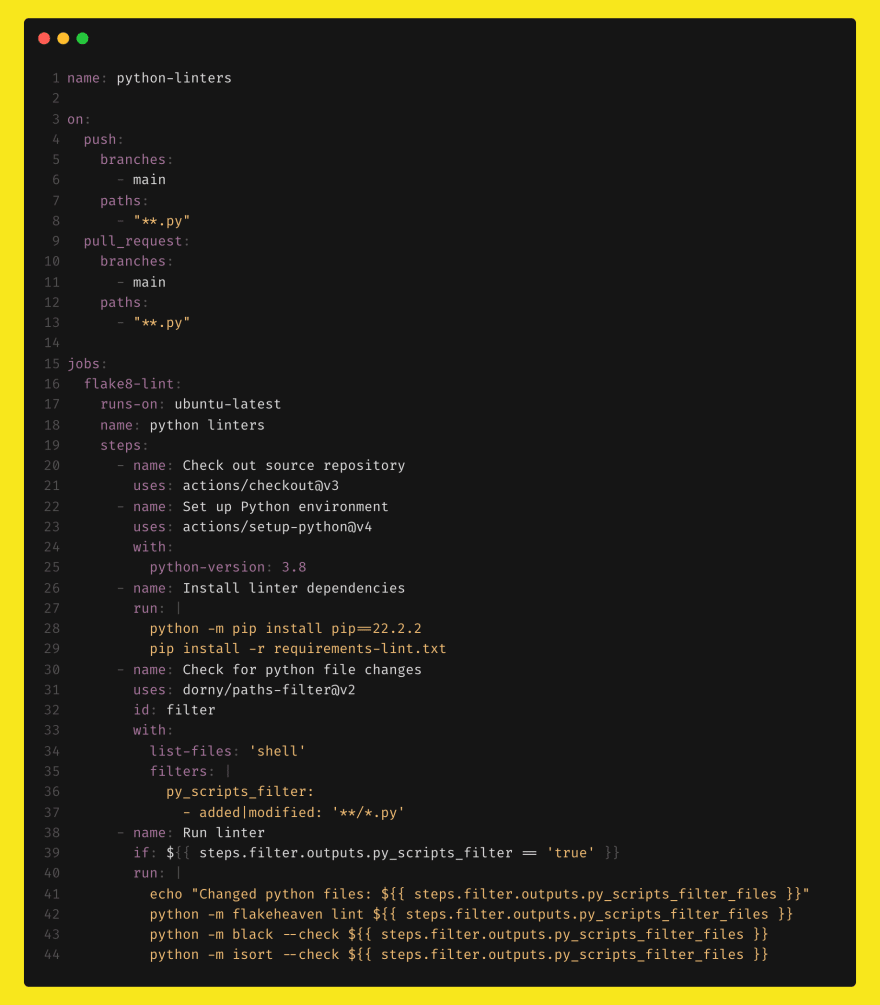 When to run it

We are interested in running linter only when a PR has .py files. For instance, when we update README.md there is no sense in running a python linter. 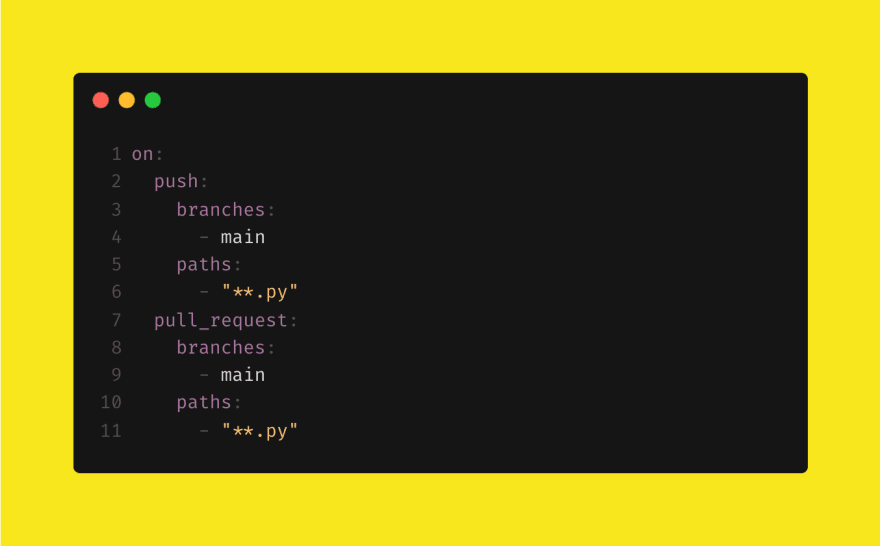 What files does it run against

We are interested in running a linter only against the modified files. Let's say, we take a look at the provided repo, if I update dags/dummy.py I don't want to waste time and resources running the linter against main.py. For this purpose we use Paths Filter GitHub Action, which is very flexible.

If we have modified a .py file and any other files such as .toml in one PR, we don't want to run a linter against the non-python files, so we configure filtering only for .py files no matter the location: root, tests, src, etc.

The changed file can have the following statuses: added, modified, or deleted. There is no reason to run the linter against deleted files as your workflow would simply fail, because that particular changed file is no longer in the repo. So we need to configure what changes we consider triggering the linter.

I define the variable where I can find the output (only the .py files) from the previous filter. This variable would contain modified .py files that I can further pass to a flakeheaven, black, and isort. By default, the output is disabled and "Paths Changes Filter" allows you to customize it: you can list the files in .csv, .json, or in a shell mode. Linters accept files separated simply by space, so our choice here is shell mode.

The next and last step is to run the linter itself.

Next, using the before-mentioned output variable we can safety pass the content from this steps.filter.outputs.py_scripts_filter_files variable to linter.

That's all I would like to share. I hope it is useful for you, and that you can utilize this experience and knowledge.

I wish you to see these successful checks every time you push your code :)

If you have any questions feel free to ask in a comment section, I will do my best to provide a comprehensive answer for you.

Question to you: do you have linter checks as a part of your CI/CD?

If you found this article helpful, I invite you to connect with me on LinkedIn. I am always looking to expand my network and connect with like-minded individuals in the data industry. Additionally, you can also reach out to me for any questions or feedback on the article. I'd be more than happy to engage in a conversation and help out in any way I can. So don’t hesitate to contact me, and let’s connect and learn together.

CLI Client for ReductStore v0.5.0 has been released

Once unpublished, this post will become invisible to the public and only accessible to iamtodor.