The two primary functions it offers are queries, and user actions. Queries are the methods that Testing Library gives you to find elements on the page [6].

This article explains the three types of queries ("getBy", "findBy", "queryBy") and how to use each one in different scenarios with code samples. [Note A] 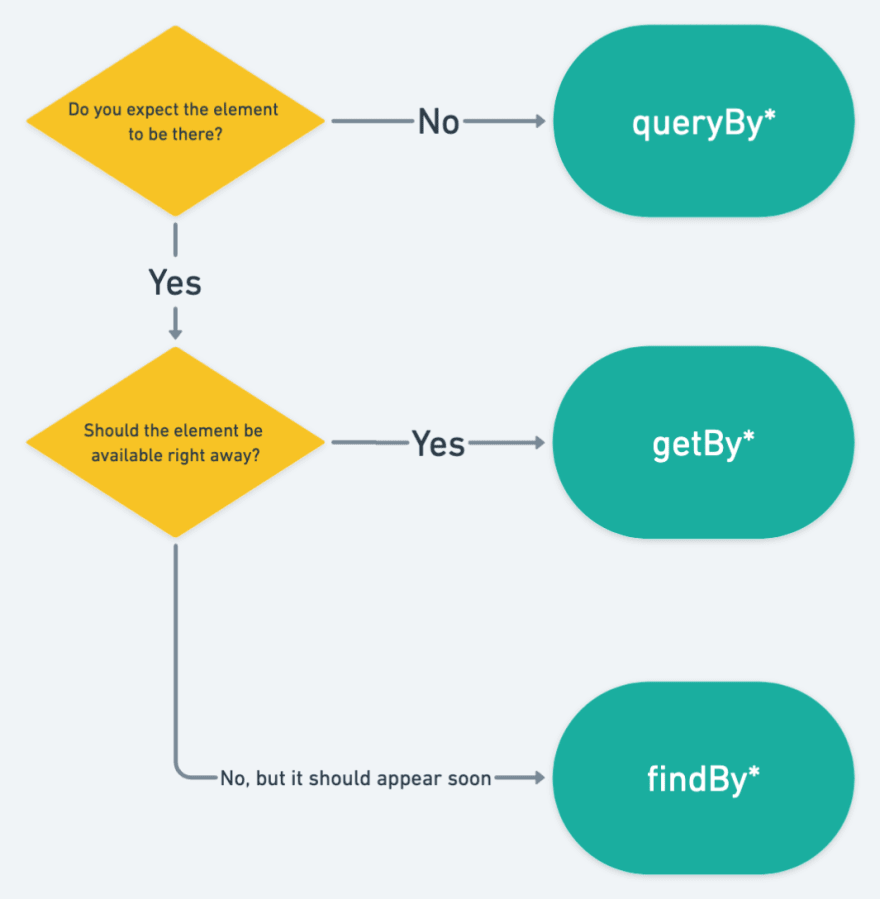 queryBy should only be used if you want to assert that an element is not present [1].

Asserting an element should not be present

Asserting an element only appears under certain conditions

Example: a form's Submit button does not appear until all input fields are filled.

Asserting an element is in the correct initial state

Example: a button that is initially "On", not "Off".

Asserting an element disappears or is removed

This example is taken from the Testing Library documentation on disappearance [2].

The waitFor async helper function retries until the wrapped function stops throwing an error. This can be used to assert that an element disappears from the page.

There is also a waitForElementToBeRemoved helper, but in my experience I find await waitFor + queryBy to be more reliable, especially if expecting an element to disappear after a fireEvent or userEvent action. [Note B]

getBy is used to get an element on the page, and will throw an error if no matching element is immediately found.

Two common use cases are:

While queryBy can also be used for those purposes, the main reason to prefer getBy over queryBy is that getBy will generally give you more helpful error messages when the element is not found.

Example 1 - asserting an element is present

If this assertion fails, the error message is Unable to find an element with the text: Username. The error message clearly describes the desired element. It will also automatically print out the DOM so you can inspect the page yourself.

If this assertion fails, the error message may look something like "null is not in the document", or, even more confusingly, "received value must be an HTMLElement or an SVGElement. Received has value: null". There's not much information about what went wrong in these error messages, since the assertion can only see null as the actual value.

Example 2 - interacting with an element

If the button is not on the page, getBy will throw an error with message "Unable to find an accessible element with the role "button" and name /Next/i", which clearly describes the expected element. As mentioned in Example 1, it will also automatically print out the DOM to help in debugging.

If the button is not on the page, queryBy will not throw - instead, it returns null. The test will instead fail on the next line, when the fireEvent call throws with the error: Error: Unable to fire a "click" event - please provide a DOM element. This error message is less obvious since queryBy quietly returned null, and does not provide any information about the missing element - this requires more time and effort to debug.

findBy will return a Promise, so you must use await or .then() [3]. It will throw an error if the element does not appear after a specified timeout. [Note C]

Use cases for findBy are the same as getBy, but in situations where you may need to wait for the desired element to be on the page.

A. The code examples shown here use Jest and jest-dom, which provide custom matchers like toBeInTheDocument() [4].

According to [5], "waitForElementToBeRemoved is meant to await for async operations and in the example attached, you don't have anything async but just a simple react state change. In that scenario, there's no need to wait for anything."

C. Behind the scenes, findBy is a combination of getBy and waitFor, and accepts waitFor options as the second parameter, allowing you to customize values like the timeout.

Build With Focus
We’ll sit down with your team and build side-by side.

Deploy With Focus
The most expensive app you’ll build is the one that’s never deployed.

Learn With Focus
Scale knowledge across teams of 10 to 100.

Once suspended, focusedlabs will not be able to comment or publish posts until their suspension is removed.

Once unsuspended, focusedlabs will be able to comment and publish posts again.

Once unpublished, all posts by focusedlabs will become hidden and only accessible to themselves.

If focusedlabs is not suspended, they can still re-publish their posts from their dashboard.

Once unpublished, this post will become invisible to the public and only accessible to Shavina Chau.

Thanks for keeping DEV Community 👩‍💻👨‍💻 safe. Here is what you can do to flag focusedlabs:

Unflagging focusedlabs will restore default visibility to their posts.