In our team at Flipp, like many companies, we have a venerable and enormous Rails monolith which is feeling its age. We've started the long process of breaking it up, but in the meantime there are hundreds of thousands of lines of code which are changed piecemeal across dozens of features.

We introduced Rubocop, the Ruby linter, a few years ago, and very slowly started updating the code as we changed it. We used a pre-commit Git hook to ensure that our developers couldn't even commit code that didn't pass the linter. We used a modified version of dirty_cop - at the time this was just a gist we found online - which only runs the linter on modified files.

As time went on, this solution started to become less and less ideal. Our codebase was so big and so old that just starting the linter could take upwards of 20 seconds. We took on new team members, not all of whom installed the pre-commit hook; other teams began submitting pull requests as well. This just wasn't a great solution to ensure we had a clean codebase with a consistent style.

Our first instinct was to move the lint check to our CI tool, CircleCI. It's really powerful, but there was one big problem - CircleCI runs on pushes, not pull requests. It would have no way of knowing what files changed in the PR.

Finally, we started investigating GitHub Actions. This seemed like it ticked all the boxes - it's a CI tool that can be set to run on pull requests, meaning it would be possible to detect which files were changed in that PR. Even better, because it runs within the GitHub ecosystem, it would be relatively simple to add comments or even commits to the PR itself fixing or commenting on the issues that were found.

Luckily enough, we found two existing actions that looked right up our alley:

On with the show!

When developing this, we ran across a number of issues we were able to solve:

The action forks fixed all the problems, so now this workflow file: 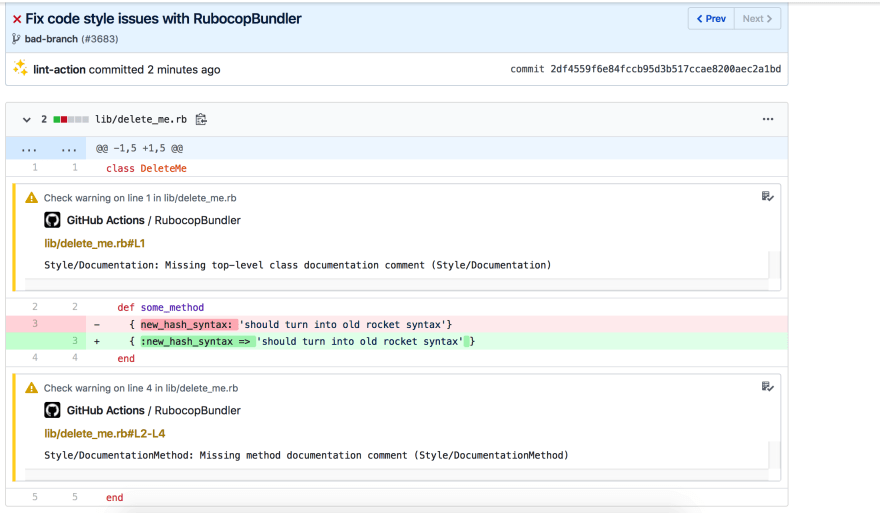 This was done with Ruby, but you can use the linter for any language you like!

Addendum: I've added PRs to both the abovementioned actions, and have gotten a response, so this functionality should be available in the base repos soon, although it might look a bit different. (In addition, see this issue where it mentions that some of the annotations might be clobbered in some cases - we felt this was acceptable.)

Update March 30: My PRs and issues have been released! The new way to do this (using the official action repos) is as follows: