User experience is crucial when you interact with your website or web app. Though it may seem that choosing a drag and drop element is no big deal, after all, it’s just a basic functionality component! But, the drag and drop module lets you transfer the items between drag handlers, tables and lists, touch devices, animations, previews, and placeholders, thus resolving the simple but still integral step that allows you to ‘take an object’ and drag it to another location.

What is Drag and Drop?

Drag and drop is an action carried out by the user in order to move one or another element to a different place in UI. There are lots of well-known applications where you use the drag and drop function as the basic one, let’s remind ourselves of just a few of them: Trello, Jira, Zapier, Monday, and others, where we one way or another using drag and drop to move things.

This simple action may be comfy not only as a part of the modern user experience, especially for those people who have disabilities or some difficulties with performing manual-type actions.

But why does such a simple element take quite a while to develop? The answer is simple: it takes a lot of code to build high-quality, neat and clean JavaScript forms. And it is much faster to run any ready-made library where you can easily borrow some pieces of code.

There are dozens of open-source libraries that help to create draggable and movable elements (e.g. lists, cards, tables, etc) in your React app. And, this option can simplify the UX route, in comparison to the process of filling in forms, and shortens the time of one or another formal action.

The most common use cases for drag-and-drop in React include: uploading files; replacing the components within created lists and rearranging images and assets.

DragDrop Container: where you held and then taken out the component (data)

DragDropContext: is the place where drag-and-drop is carried out

Droppable: the component which allows draggable components to be able to drop at the targeted area;

Draggable: the component which will be replaced;

As well as Droppable, it requires several properties to make the component displaceable;

onDragStart: onDragStart component occurs when the user starts to drag an element;

onDragEnd: the component known as DragEnd occurs after the action has been accomplished;

DataTransfer: the component that can hold data about the dragged object;

How to Choose a Good Drag and Drop? 🤔

Surely, this is a relatively controversial question, because if you have enough time at your disposal, you may start coding on your own. Moreover, if you’re a junior programmer, we would not recommend that you use any ready libraries, but try to figure out the problem using your own code. Yes, bugs are inevitable, though after each challenge there will surely be progress.

The vast majority of drag and drop libraries are written with the help of Typescript prevalence because Typescript is known for being structured, highly secure, and more consistent than vanilla Javascript. At the same time, it takes longer to compile the code in TypeScript, whereas JavaScript is more easy and flexible in terms of development.

So, if you are an old-school adherent, who is devoted to JS, you should understand that you need to know Typescript peculiarities to write with it. Plus, the size of the code will increase, because Typescript requires extremely detailed and accurate coding.

🤖 How to Build Custom Draggable Components in React?

To enable dragging on the component we need to proceed this path:

1.First off, create a drag component (drop area), in other words — container, where you will further drag dataItem.
2.Set the draggable attribute on the dataItem
3.Handle onDragStart event
4.Add here event.dataTransfer.setData
5.event.dataTransfer.setData component will contain some data, dataItem
6.Create a function startDrag event
7.Create a dropTarget component; it will call an event handler when dataItem with children will be dropped in
8.Handle onDragOver event
9.Create event.preventDefault() function that will enable the dropping process of the component
10.Handle onDrop event
11.Set the consent function – getData
12.Call the dropped component onItemDropped
13.Finally, return the components to their initial state,

Voila! This way your component will be ‘transferred’ from the container to the DropTarget.

How to Make Drag and Drop With React dnd library? 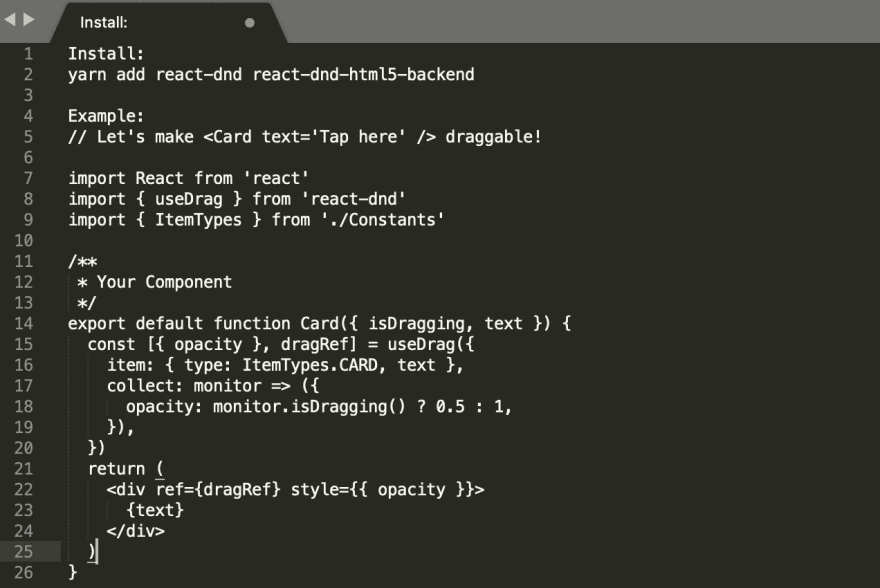 React beautiful dnd is the most popular library to build React Drag and Drop lists easily. It has already won the heart of 23.8k developers on GitHub, thanks to its high performance. It has a clean and powerful API that is easy to work with and it fits well with any modern browser.

Here the name of the library speaks for itself. React Drag Drop container offers functionality for mouse and touch devices; i.e. it allows you to set up a draggable element, drop a target for it, plus, it highlights the drop target when dragging over it (highlightClassName). Also, you can drag an element copy of the element, or let the element disappear while dragging (disappearDraggedElement).

Pros: React-Grid-Layout works well with complex grid layouts that require drag-and-drop, such as dashboards which can be resized(e.g., looker, data visualization products, etc.)

Cons: Because of the clunky API, React-Grid-Layout may need more calculations and it’s obviously a better fit for large-scale apps.

React Dropzone is an example of simple HTML5 drag and drop zone with React.js. It requires a standard installation process with npm command and using a module bundler like Webpack or Browserify. React Dropzone has 8.2 ⭐ Github stars and is based on Javascript.

React DND got 15.9k ⭐ stars on GitHub, and was written mainly with the help of TypeScript, as well as JavaScript and CSS. It has the sort option, group option, delay option, delayOnTouchOnly option, swapThreshold option, and many other essential features for implementing drag and drop components. React DND works well with grids, one-dimensional lists, but it’s harder to work with than for instance the well-known react-beautiful-dnd when you need to customize something individually.

React sortable is one more brilliant instrument made with Javascript and HTML, commonly used for creating drag-and-drop lists. It has all the basic functionalities of sorting/delaying/swapping/inverting and lots of others. Available on all touch modern browsers and touch devices.

Snap, resize, customize your drag and drop elements with Interact.js. The library has also an advanced version, check it here. It also supports evoking simultaneous interactions; interaction with SVG and works well with desktop and mobile versions of Chrome, Firefox, and Opera as well as Internet Explorer 9+. Sharp has 10.2 k ⭐ on GitHub and

React Kanban is a relatively young but super pluggable library positioning itself as ‘one more Kanban/Trello board lib for React’. Kanban was written with the help of JavaScript, SCSS and HTML. But, be careful using this library with lots of cards (more than 1k), cause then you may face some performance hurdles. In this case, virtual lists may become the solution.

Juggle and Drop is an instrument to manage your tasks made with pure Javascript, with the help of React, redux, MLAB, express mongodb, Google Analytics. With Juggle and Drop you can add, edit, delete cards and lists; clone the component, navigate to the root directory, and other.

One more highly recommended and really powerful package for working with animation functions in JS. This package has 19.7k ⭐ on GitHub, and 612,446 installations according to NPM. And among others, it has sorting lists with drag and drop. How to get started? npm install — save react-motion and keep working!

The React-smooth drag and drop package is a super lightweight and highly customizable library for React with 1,5k stars on GitHub and with lots of configuration options covering d&d scenarios. The cardboard and fonts look really neat and pleasant to the eye.

Nested DND in juicy colors helps to drag a part of the stack with the items lying on top of the dragged one. Drop it on top of any plays, and see how simple and intuitive it is.

React Nestable, an example of JavaScript drag and drop library, is a drag & drop hierarchical list made with a neat bit of deduction. This package is finalizing our list of open-source drag and drop libraries recommended while building the dnd option.

One more relatively fresh library to manage and customize your inner drag and drop component easily is React-files-drag-and-drop. It has a list of basic properties and was developed with TypeScript and CSS language.

Check more examples of React drag and drop on codesandox or here.

Now you know enough about React DnD libraries and it is high time to explore further the rest of the documentation in detail! Stay motivated, don’t be afraid of making mistakes, and debugging them! Well, this is a good place to tell: if you’ve never made a mistake, you’ve probably never done anything.

At Flatlogic, we carefully craft dashboard templates on React, Vue, Bootstrap and React Native to bootstrap coding. We are mentioned in the Clutch top-performing agencies from all over the world. In the last 6 years, we have successfully completed more than 50 templates and large-scaled custom development projects for small startups and large enterprises. We love our work and know that only beauty (beautifully designed templates 🙂 ) can save the world.

You might also like these articles:
Javascript Tabs: Save Space! Examples Of Tabbed Widgets
React Table Guide And Best React Table Examples
12 JavaScript Image Manipulation Libraries For Your Next Web App

Building a User Login System with Express js and Fauna

Check out our templates!