The year was 2019 and I wanted to build a website using React. I had some experience in it, having done a project during my 3rd year of engineering but I wanted my site to be SEO friendly, fast, have client side navigation and good DX.

So after researching, I found two frameworks which fit my bill perfectly: Gatsby and Next.js. I wasn't going to call any APIs and my content was all going to be static so I did not need any SSR solution. And since Gatsby had excellent plugin support I decided to go with it.

Gatsby: The Chosen One

Being a new and a favourite framework amongst the developers there was no shortage of resources. As I was going for writing blog posts (which admittedly I did less of) I followed this tutorial by Andrew Mead:

After some tries and moving from one library to another for rendering some 3D stuff and animating pixels, my site was up and running at https://old.flashblaze.xyz which was https://flashblaze.xyz initially.

The tech stack I used was:

You can find the repo on GitHub and "peruse" through code.

You get the picture.

Since I was going to write blog posts using MDX, needed good SEO, along with PWA (why not) and with the above mentioned stack, I needed a lot of plugins and by lot I mean A LOT.

Here is my package.json

Having this huge repository of plugins made me try different tools and libraries and integrate whatever I wanted and it just worked™.

But a storm was coming 🌪

Both the frameworks were adding features and I too was churning out a post per month (for now). I was fiddling around with my site regarding which analytics to use, trying out Preact, and some minor fixes here and there.

Then Gatsby v4 was released.

It introduced new features like DSG, SSR, along with a couple of performance improvements. Seeing a major version and looking at the features I wanted to upgrade as well. Since a lot of plugins are dependent on Gatsby's API they also had a comprehensive upgrade guide.

The thing was, most of my plugins were unmaintained, or they recommended alternate plugins which did not have full feature set. So I thought why not wait a couple of months and see what happens.

And so I waited.

After approximately 3-4 months I again looked at the plugins and oh boy were things changed! The plugins, the dependencies all were updated by major versions and some of required a full rewrite of my site. I don't remember exactly but I believe theme-ui was one of them (on which my whole site was basically built on). I tried updating my dependencies one by one, but it did not work and that's probably on me, but I was just plain tired of checking the docs of each dependency, see the migration path and do it all over again.

After spending countless hours and making no significant progress with it, I saw no point in spending more time on it. Add to that the enormous build times on my local machine (I had to build locally a few times due to it being a SSG framework and I wanted to see whether it would break on Vercel or not as it had happened a few times before), as well as on Vercel I just let it be. 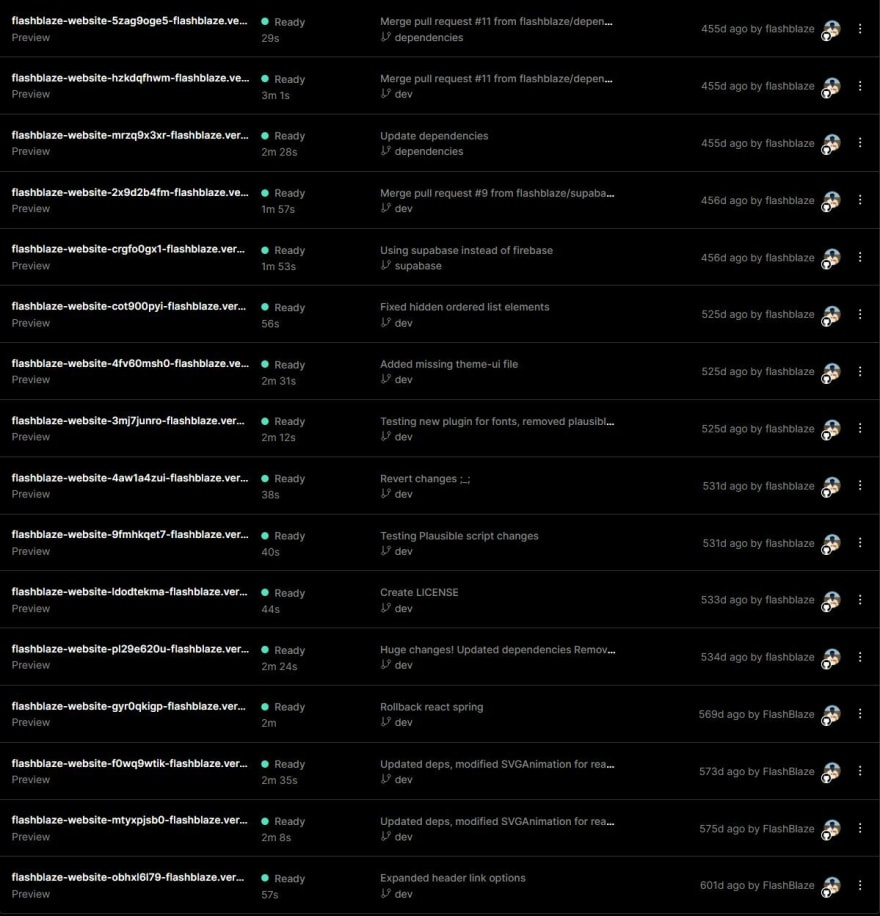 Astro has entered the chat

During all this time another JS framework was being developed called Astro. Astro claimed to ship zero JavaScript, 1st class MD/MDX support, great 1st party plugins and to top it all off, allowed you to choose framework of your choice on a per page/per component basis. That's right. You can import a React, Vue, Svelte or any of the supported frameworks all in a single Astro component and it would just work™!

I was beyond impressed with these features and I was keeping a close eye on when Astro will ship v1.0. And it was released on 9th Aug 2022. 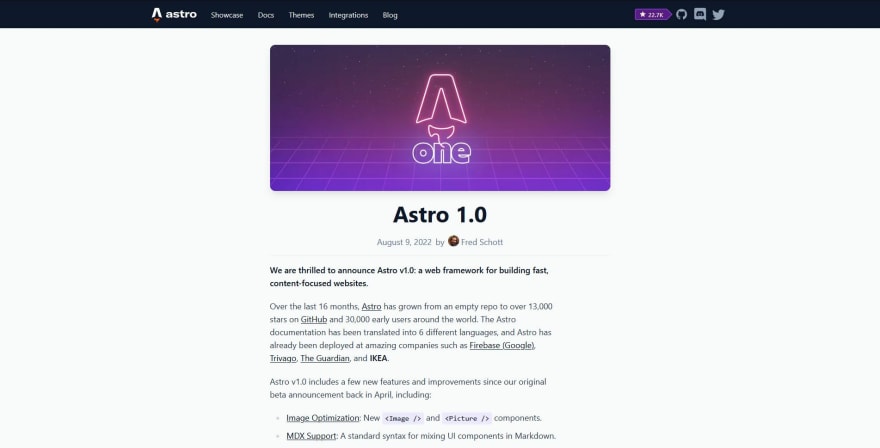 Since I was developing my website from scratch I discarded the old design and redesigned it to make it look decent with minimal JS. And so I pushed my 1st commit on 14th Aug 2022 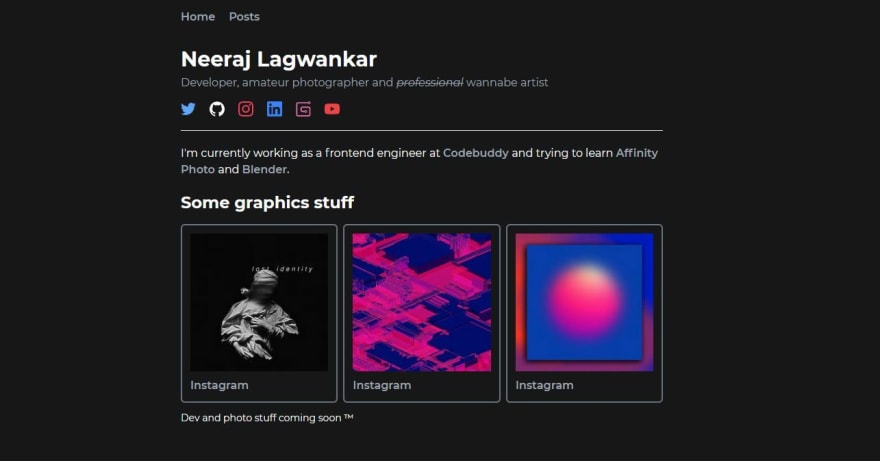 Instead of some UI framework/styling solution which was specifically tailored for React, I went with Tailwind CSS. It is hugely popular, has good support for almost all the frameworks, is a 1st party plugin from Astro and was great to get started with. For my posts I chose MDX and for components in MDX I chose React.

Here is my package.json. As you can see, it is pretty minimal as opposed to the earlier one all thanks to the things which Astro provides out of the box along with some of the libraries which I chose to forgo due to change in requirements.

The build times also improved by quite a margin. 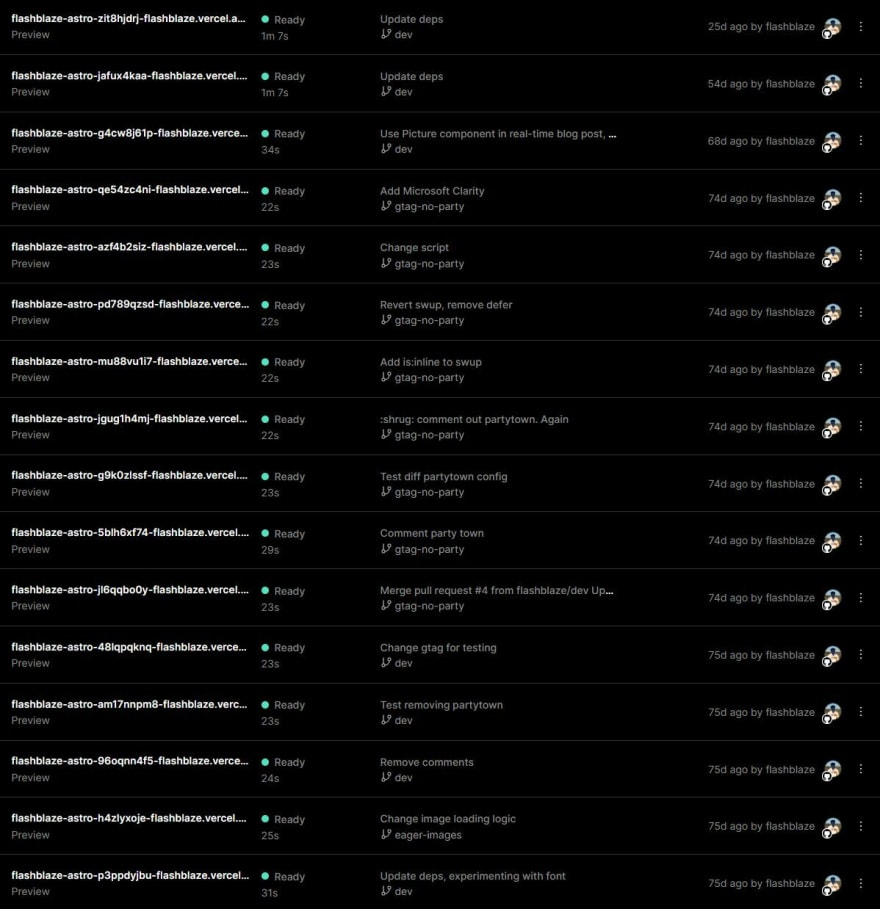 But all said and done, Astro too is not perfect and here are some of the Pros and Cons which I found while working with it.

Pros and cons of Astro

For now, yeah. I'm quite happy with the current setup and who knows, instead of switching to another framework and then writing a post on it, I might just write one for the heck of it.

Once suspended, flashblaze will not be able to comment or publish posts until their suspension is removed.

Once unsuspended, flashblaze will be able to comment and publish posts again.

Once unpublished, all posts by flashblaze will become hidden and only accessible to themselves.

If flashblaze is not suspended, they can still re-publish their posts from their dashboard.

Once unpublished, this post will become invisible to the public and only accessible to Neeraj Lagwankar.

Thanks for keeping DEV Community 👩‍💻👨‍💻 safe. Here is what you can do to flag flashblaze:

Unflagging flashblaze will restore default visibility to their posts.