The words "data structures and algorithms" can bring up certain feelings in many engineers. Practicing these skills can be especially daunting for newer developers preparing for technical interviews. While I am also facing this same intimidation, I've been reframing it to make it a more enjoyable experience.

So instead of asking:

How can I get get through this practice?

I've been asking myself:

How can I make the most of this practice?

After changing the way I view this practice and setting up a structure for tackling these problems, I've noticed some great benefits! Not only am I more excited to work on these tasks, but I'm also using this as an opportunity to build up other skills that will help me down the line even after the technical interviews. This should not be a chore, but rather an opportunity to become a better software engineer.

In order to get the most out of my practice, I needed to decide what I wanted to do.

When practicing with a service like LeetCode or HackerRank, the classes and tests are usually given to you (classes are typically instantiated already for the inputs to the algorithm, and tests can be run at the click of a button with predefined test cases). While it would be quicker to rely on those, writing my own classes and tests gives me a better understanding of how data structures work and how to write effective tests.

With decisions made, I came up with a process on how I tackle an algorithm problem:

Notice how both lists are nearly identical? That wasn't an accident, and we'll look a little bit into how this ties into test-driven development!

First you need to determine what needs to be tested. If you're building a class, what methods are needed? If you're writing an algorithm, what are some different test cases that you need to anticipate? If you're working on a task assigned to you, read the deliverables carefully. Make sure you have a solid understanding of what is expected before you write anything.

Next, what are the expected inputs and outputs? For example, say we are building a Stack class (a last-in-first-out data structure). When we run the pop method there are two separate actions that should happen:

Once you know what your code is expected to do, you can start writing tests. The tests will fail for now since none of the code has been written yet, but that's part of the process! Here's what those tests could look like:

Note: I used Jest as my testing framework, though there are many options out there and the process should be similar regardless.

One of my favorite things about using a test framework is that tests can be automatically re-run every time the files are saved. As I'm coding, I keep an eye on the terminal in case any changes I made have unexpected results (good or bad).

The full test code I wrote can be viewed in this GitHub repository.

The time it takes to write tests can give you some time to think about the task at hand and ponder possible solutions. By the time I finish writing tests I typically have an idea of how to start my code, but if not I take more time to think on it. For complex problems, it may help to draw some diagrams, sketching out notes, or maybe implement rubber duck debugging! Pair programming with a human is an acceptable substitute if a duck is not available. If the tests can be tackled piecemeal, focus on one task at a time to get closer to your end goal.

Let's say I'm working on the pop method of the stack class that we wrote tests for above. This method has two separate tests it needs to pass. For the first test we need to remove the top item of the stack, so let's start there:

The code above replaces the top item with the next item in the stack. That's all that's needed to remove the top item so we've passed the first test! We're still failing the second test though. To pass the next test we need to return the value of the top item, so we just need to add a couple more lines to the method we just started:

After I have working code, I will take a closer look at the time and space complexity. While I try to be mindful of this throughout the process, sometimes it's more important to get the code functional first before optimizing it. That's where refactoring comes in!

The full code for this class I wrote can be viewed in this GitHub repository.

After I get my code to work, I take a second look at my process and look for improvements. Are there variables I've assigned that are unnecessary? Is my time complexity reasonable for the task? Are there any edge cases that I haven't considered? Refactoring gets easier with practice, and sometimes the improvements may not be obvious right away. If you're not on a time crunch, this may be a good opportunity to step away from the code for a minute!

One important thing to keep in mind when optimizing your code is that it is very rare for there to be a single optimal case. For example, below is a table summarizing a couple ways to optimize a simple algorithm that checks if all the items in an unsorted array are unique:

There are often trade-offs between optimizing time or space complexity. The goal should be to keep both at a minimum wherever possible, but sometimes decisions need to be made on which is the priority. When I'm practicing, I will sometimes solve an algorithm multiple times trying to optimize different aspects. Luckily the same tests can be used for both solutions!

This is probably the most obvious skill that is developed from these exercises. Writing code that works is (relatively) easy; writing code that works efficiently is much more challenging. Starting with a brute-force algorithm will get the job done, but developing that awareness for when code feels inefficient is crucial. I find it easier to determine the time and space complexities of algorithms now that I've been practicing more, as well as possible routes to improve them.

Before starting my practice here I had very little experience writing tests. I know test-driven development is common and provides a lot of benefits, so I was looking for opportunities to get some exposure to working with tests. The processes I described earlier for writing a data structure class or an algorithm is taken from the red, green, refactor process that guides test-driven development:

Refactoring isn't necessarily the end of the process. Sometimes after the code is optimized for the tests already in place, more tests should be added for any additional edge cases. Or maybe there's additional features that can be implemented. That's why this process is typically shown as a cycle: 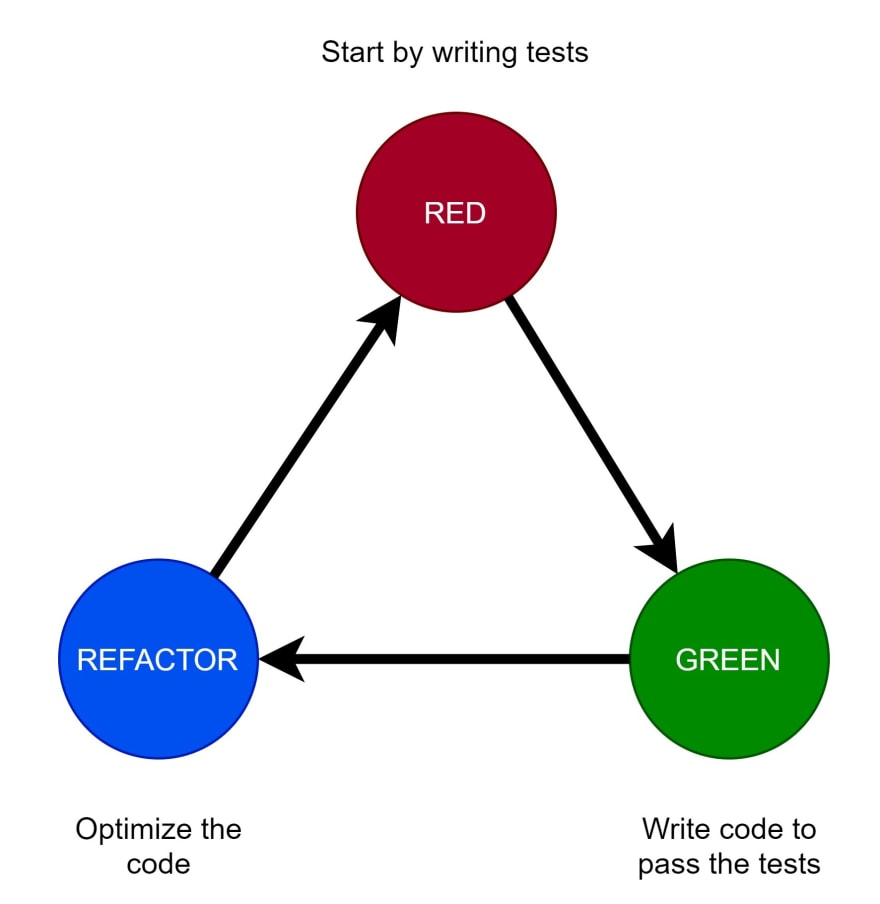 For example, there's an important edge case to consider with the pop method we walked through: what happens when you run the pop method on an empty stack? This would be a good opportunity to think about what you want to happen in this case. Should an error be raised, or should the method just return null? Determine what the method should do, and start the cycle again by writing more tests!

Of course writing code of any kind will help you get more familiar with the language! With the process I've set for myself, I find myself noticably improving in these areas (among others):

Preparing for technical interviews is a challenge for most (if not all) newer software engineers, myself included. As I continue to practice I will still come across questions that throw me for a loop. However with a structure set up for myself to approach these problems I feel much more empowered to face them knowing that I'm developing skills that will help me even beyond the technical interview.

If you want to see the tests I wrote in action, I have the files and instructions available here on how to run them.

What else do you do to make the most out of this practice?

7 Best Ruby Tutorials For Beginners in 2022