Go is an amazing language, it is simply easy to learn and gives you a lot of tooling out of the box. Most of the Gophers who started learning the Golang they have one thing in common, they struggle to figure out how to structure applications due to the lack of official guidelines. The main approach for structuring Golang applications is to start out simple, but with the flexibility to grow.

There are no strict rules for the directory structure or how to organize Go project files in a specific way. It is bad because it is easy to create a mess and good because the structure of the project can be built according to the taste of the developer.

The good structure is the one which is consistent across the project. There is nothing worse than coming to the codebase and seeing one part of code done in one way and another part done another way. Especially if you are not an original author and you just coming to the new codebase and you have no idea which structure you should follow. The good code structure must be easy to understand and navigate and it should make sense. Good code structure will make your life easy as a programmer and fun.

Go developers typically follow certain patterns in laying out the files and directories in their projects. They usually follow these patterns because it works for them and their fellow developers. In my opinion, the organisation should follow the same structure for all the projects they have for the Golang application, as this way it makes the developers more productive.

The better way to organize a Go project is to put relevant Go code files into a subdirectory under the main directory for the project so that other parts of the project are able to find the service APIs and use it.

Keeping all source files under the same directory is not a good idea, because it makes the code files cluttered, as a result, you spend most of the time looking for the correct file. Most experienced developers know about it.

For the purpose of demonstrating a project layout, we would be creating a demo project called "go-layout".

This is the tree structure of the sample project type. Below we would be explaining what each folder does: 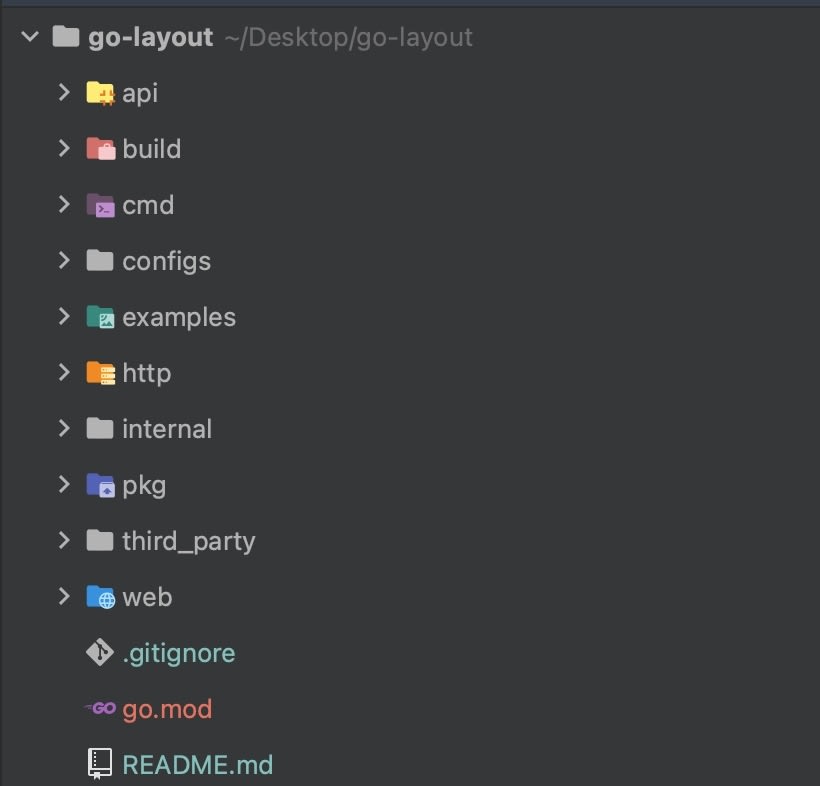 The folder will contain the main applications for this project.
There might be more than 1 application within cmd folder, and each application should have its own folder so the path would be cmd -> applicationNameFolder.

The directory name for each application should match the name of the executable you want to have, for example, cmd/myapp.

It is important that we don't put a lot of code in the application directory. If you believe that the code can be imported and used in other projects, it is better to place these codes in the pkg directory.

It is common practice to have a small main function that imports and invokes the code from the /internal and pkg directories.

Please check out some of the successful projects which are written in Golang.

This folder can have folders/files which are relevant to the packaging and Continuous Integration files, such as Docker and scripts.

Put your CI configurations and scripts in the /build/ci directory.

It can have configuration file templates or default configs.

You can include examples of your applications and/or public libraries.

Private application and library code. This is the code you don't want others importing into their applications or libraries. Note that this layout pattern is enforced by the Go compiler itself. Note that you are not limited to the top-level internal directory. You can have more than one internal directory at any level of your project tree.

You can optionally add a bit of extra structure to your internal packages to separate your shared and non-shared internal code. It's not required (especially for smaller projects), but it's nice to have visual clues showing the intended package use.

The folder /internal/pkg contains packages that are not specific to this application. These packages could theoretically be extracted into a standalone public package if they provide utility.

Library codes which can be used by external applications (e.g. /pkg/mypubliclib). Other projects will import these libraries expecting them to work, so double-check before you put something here.

Note that the internal directory is a better way to ensure your private packages are not importable because it is enforced by Go.

it is ok not to use /pkg directory if your app project is really small and where an extra level of nesting does not add much value. But you need to think about it when your project is getting big, and your root directory gets busy.

You might want to expose your application through several means of communication such as rest-api and grpc.

You can download the full project layout template from my GitHub (https://github.com/fir1/go-layout).

Hopefully, this tutorial gave you some insights on how to structure your next Golang applications.

That’s it for this blog. Please feel free to comment your views on this blog. Thanks for your time reading this blog and hope it was useful.

Once suspended, firdavs_kasymov will not be able to comment or publish posts until their suspension is removed.

Once unsuspended, firdavs_kasymov will be able to comment and publish posts again.

Once unpublished, all posts by firdavs_kasymov will become hidden and only accessible to themselves.

If firdavs_kasymov is not suspended, they can still re-publish their posts from their dashboard.

Once unpublished, this post will become invisible to the public and only accessible to Firdavs Kasymov.

Thanks for keeping DEV Community 👩‍💻👨‍💻 safe. Here is what you can do to flag firdavs_kasymov:

Unflagging firdavs_kasymov will restore default visibility to their posts.