Ever needed a grayscale color palette for different surfaces, shadows, or states in your web app? I created a little utility to generate such palette.

tl;dr: Scroll to the end to get the list of colors

But what's the big deal?

I'm glad you asked. I could have just simply created a palette that started from black #000000, and stepped through to white #ffffff with let's say increments of #080808. So something like (remember hexadecimal):

But this feels a bit off, mostly because we humans don't perceive colors as hexadecimal representations. Qualities like hue, saturation and lightness are much better interpretations of human color perception. When you compare two different gray colors against each other they will only differ in lightness. A common method to measure difference in lightness is calculating the contrast ratio.

So how is color contrast ratio calculated?

Actually, I already wrote an in-depth article about calculating the color contrast ratio, see below if you're interested: 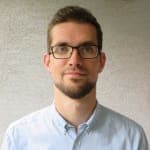 Which Colors Look Good on Black and White?

All in all, the method to calculate the contrast ratio was already given.

My goal was to create a gray color palette on which each color against its adjacent color has the same contrast ratio. To generate such palette I only needed to step through the gray RGB space and store the colors that had enough contrast against the previous palette color. I picked the default contrast value of 1.10362 (that is roughly 1.1) so that the palette spans from #000000 to exactly #ffffff and consists of 30 individual colors. You can see the result in the embedded CodePen below, but feel free to play around by opening the Pen in Edit mode and modifying the value of CONTRAST_RATIO in the first line of JS 🙂

The Best Frameworks to Build a Minimum Viable Product

I created a Jekyll Theme in 375 Minutes 🔥

How to create skewed backgrounds with CSS