What are they, what is the difference, is one better than the other? How do they work? When is each one appropriate to use? I've had so many questions about this since this seemed like such a loaded question around programming. Let's start with what each one is.

Object-Oriented Programming:
"..a programming paradigm based on the concept of "objects", which can contain data, in the form of fields (often known as attributes), and code, in the form of procedures (often known as methods) A feature of objects is an object's procedures that can access and often modify the data fields of the object with which they are associated (objects have a notion of "this" or "self")." - Object-Oriented Programming

Just based on these Wikipedia definitions, I'll determine that some keywords to point out here for some differences:

So what you are saying is if I did something like this.

Here is the output of this code:

So we instantiated a hero "Que" without a weapon, which outputs their weapon to default "none." Then we created a copy of "Que" but with a weapon "Sword," instantiating a new Character Object with the Equip method. However, we are assigning that method to a variable 'hero_with_weapon.' We created another copy with an 'Axe' weapon, also assigning the method to another variable. Then calling just the 'hero' object at the end, we see that the weapon is still none from the first 'hero' object.'

We can see here in pry that calling each variable, we did not alter the hero object, but instead created copies of the hero object. The objective of Functional programming is to create immutable data so we don't alter data we don't want. This is just a brief example of my understanding of Functional Programming because there is so much more to this topic that I did not expect when I was diving more into this topic. 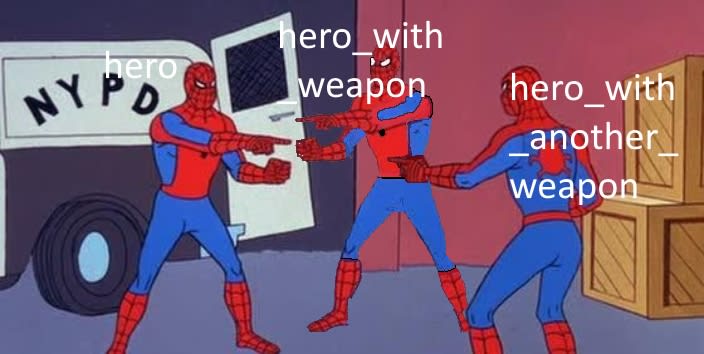 With Object-Oriented Programming, the data is altered when we use methods.

We instantiate a 'hero2' Person object. Calling the equip method for the 'hero2' object assigns the "new_weapon" argument into the @weapon property. So every time hero2.equip is called with a new weapon, it changes the weapon property for hero2.

When we call hero2 at the last line, we can we see 'hero2' forgot about not having a weapon and having a spear. This shows that we would constantly be changing the data for the objects.

Functional is to Declarative as Object-Oriented is to Imperative.

Declarative: "In a declarative programming style you describe the results that you want, but not how to get there." - tobyink

Imperative: "The word "imperative" comes from the Latin "impero" meaning "I command". It's the same place we get "emperor" from, and that's quite apt. You're the emperor. You give the computer little orders to do and it does them one at a time and reports back." - tobyink

FP & OOP has mainly been categorized as these 2 approaches to programming. Declarative expresses the logic without describing the control flow.
Imperative expresses through all the commands necessary through the program on how it works.

There are still many more pros and cons that I didn't include because I am even unfamiliar with that territory just going deeper, like Lambdas, Recursion, Memoization, etc. I did not expect that this rabbit hole was even deeper than I could have possibly ever imagine. Although, I do feel like I understand a general concept between Functional and Object-Oriented Programming now since this has bothered me throughout my years of self-teaching myself coding to even currently studying at a coding bootcamp.

A quote that was used from a blog from CodeNewbie gives a nice summary about when to use Functional Programming and Object-Oriented Programming:

'Michael Fogus, author of “Functional JavaScript”, suggests in his blog post “FP vs OO, from the trenches” (http://blog.fogus.me/2013/07/22/fp-vs-oo-from-the-trenches/) that when he deals with data about people, FP works well, but when he tries to simulate people, OOP works well.' - CodeNewbie - Object Oriented Programming vs Functional Programming 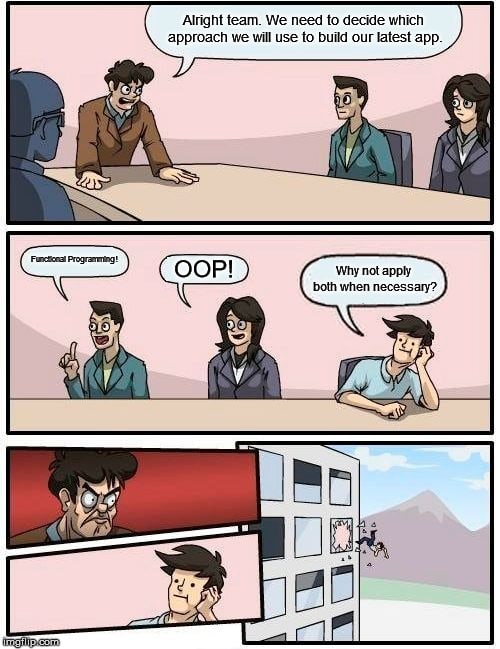 If you want to learn more beginning concepts of Functional Programming, check out this link:

The Tension of Design and Development