It all began in 1976 with my mother saying I should be a lawyer. There was no way I was going to spend the time to go to law school after college. “You should go to business school”; there aren’t a lot of women in business school which means there will be jobs when you get out. Hmmm. Ok, I will go to business school and study finance. After all, I did get the “shorthand award” in high school for having the highest grade in shorthand and I do like calculating numbers and am pretty detail oriented…

So, I picked a small college in Rhode Island that focused on business as a major. Well that was pretty boring so after a year I transferred out to the University of Georgia (yes, the very large state school in Athens Georgia). They had a business school with a good reputation and housing on campus that I could live in. At this point, I wanted something different than finance. The program at UGA which combined business with computers sounded pretty good and so I became a business information systems major.

I didn’t really know much about computers and it was a bit overwhelming to go to the basement of a huge building where the computers were housed. They took up the entire 10 or maybe 20,000 square feet of the building with big windows that we could peer into with hopes of seeing our job running on one of the computers. It looked like many large metal boxes with small dials and lots of lights that often blinked – I had no idea what was going on inside. I spent hours in that building and hours with my nose pressed against the glass of the windows that looked in at the computers.

I would do my COBOL programming assignment and bring it over to the computer center on paper and somehow, it was run to see if it worked. 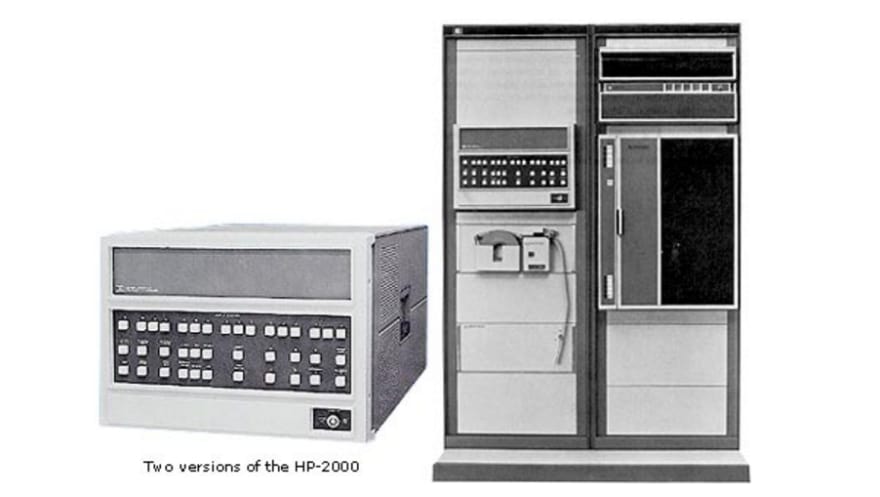 I graduated from UGA and was hired by New York Telephone. I had the job a few months before I graduated and my roommate was very jealous of my starting salary of $17,500. That was a great salary. I was going into a program for new college grads in the IS department – Information Services Department. Looking back now, “the phone company” was very progressive. The head of the IS department was a woman. Her reputation was that she was tough and you didn’t really want to cross her. I don’t think I actually ever met her.

In this position, I used punch cards that fed into a computer. I was working with Job Control Language (JCL) which was the code that told the computer (a large IBM mainframe) how to allocate its time and space resources among the total number of jobs that have been started in the computer. These jobs ran in the background and were called batch jobs. The code told the computer when to run these types of jobs without the user interacting. A print job would be an example of a batch job.
I got to take my first business trip carrying 3 large boxes of punch cards to a company building in Albany, NY which housed a computer that needed a JCL change. Three of us went and each of us had to protect one of the boxes of cards and make sure they did not get out of order. We slowly and carefully fed then into the computer about 2 inches of cards at a time. The testing took us 3 days. 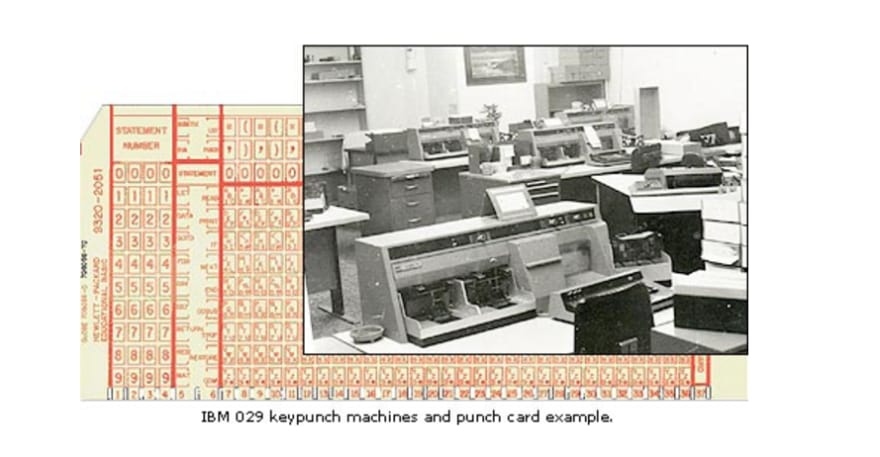 After 6 months, I felt like I wasn’t really programming and didn’t want to lose the COBOL programming knowledge I had gained in college, so I had a frank chat with the boss and talked about how my computer programming skills were being wasted. Next thing I knew, I was in the NY Telephone boot camp program for Cobol programming. That was so much fun; it was like being back in college but getting paid. A group of us went a more casual building in downtown Manhattan every day for 4 months learning Cobol. On Fridays, we got out early which was great since it was summer. I made some great friends in that program. In fact, one of them introduced me to the guy who is now my husband.

Upon completion of the COBOL school, I got placed back in mid-town Manhattan in the IS group who was responsible for programming the very complex payroll system that paid over 65,000 employees. I was responsible for the little piece that calculated pay for the non-conventional workers. People who either worked seasonal or temporary jobs.

After writing my program on paper and getting a cursory nod from my boss, I would sit at a bank of Wang terminals and data entry the programming into the “system”. A bunch of these terminals sitting in a row on a table. It was a social place to work but often distracting since you were sitting with other people programming something totally different. 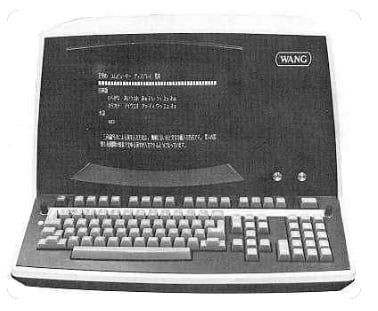 This job took a lot of patience. There was no instant gratification. When I needed to make a change to the program, I would submit my change, then come in the next day to see how it went. If there was a high stack of paper with my name on the first page sitting on the floor, my change did not work. You would get a data dump from the smallest errors – missing comma, wrong slant etc. There were literally hundreds of pages and it often took hours to figure out what went wrong as I read through the stack. Oh, and everyone knew you had made a mistake. I’d correct the mistake and have to wait again until the next day to see if it worked. All the testing was run at night only because the live systems had to run during the day. In the morning, if you came in to a nice quarter inch to half inch stack of paper, you might be golden. You knew that at least your syntax was right and hopefully what you were trying to accomplish worked too. I doubt that some of the personalities who code today would have had the patience that was needed back then.

Looking for the next promotion

I moved around in the payroll programming department and learned quite a bit but after 2 years, I was looking for a promotion to the next step. Turns out, the "next step" was business analyst. This job entailed working with the business person and understanding their requirements for computer programs. It took me out of the actual programming and more into listening and trying to understand requirements. Over the next few years, as I went up the corporate step ladder; I got further and further away from programming and more into the general business world. It wasn’t long before I accidentally slipped into human resources.
My technology experience helped me become the Staff Director of Health and Fitness. The medical director loved the idea of someone who could track information and report out on it. I taught myself Dreamweaver and used it to create a monthly health and wellness newsletter. Same principal as programming – using symbols and not words to format and place text. That was a fun job until the medical director retired and after 18 years in New York Telephone/NYNEX/Bell Atlantic/Verizon, my job got eliminated.

Having been a Cobol programmer for payroll helped me get my next job at Fujifilm. They needed someone who understood payroll. I understood the back end and the front end. The payroll system was going to be enhanced by being part of a bigger HR system. Perfect – I knew the back and front end of payroll and I had HR experience. I was now the Payroll and Human Resource Information Systems (HRIS) manager. I liked getting back into the data and system work. I understood the concept of tables working together and key fields that tied those tables together. I implemented an E-Time system for managing people’s time. At the time, it was a unique system where the person clocking in had to scan their hand. It was called a biometric hand scanner and I led the implementation and then trained managers and employees on its use. It was implemented in distribution centers in New Jersey, Georgia and California.

I continued my career as a payroll and HRIS manager as I moved to my next job in the reinsurance industry. There was no HR system at all other than an excel spreadsheet that had column after column after column of employee data. After looking at many systems, it was decided I would be implementing the NuView system. It seemed like a great system and a great company to work with. The system got implemented, but it took a very long time. Just when I thought I had a module done, my HR department would decide they needed yet another customization. I was still managing the payroll and now the benefits for the company and trying to do this huge implementation with the software company. No one in the HR department had time to help or test, so I just kept plodding along.

Soon the job became too big for one person and a more technical and experienced HRIS manager was hired. I was happy to have that off my plate and kept my hand in the technical aspect of the payroll system and integrations with provider systems but most of all I was managing people.By the time I left that job, I wanted no part of payroll. Managing payroll meant celebrating Christmas and New Year’s in the office. It meant sitting with IRS auditors, smiling and offering them cake and coffee all day.

My next job was in managing employee benefits. A good job with good people. Not very technical at all, but I was able to use some of my technology experience to put some tasks online like FSA enrollment.

Every now and then, I see a job for a COBOL programmer. The pay is great and I wonder if I could ever refresh my skills enough to go back. There is something sentimental about this but the logical me moves off that thought quickly.

Brave enough to be bad at something new

This community is unlike any other and I am proud to be a part of it.

It’s 2020, here’s to supporting people through their journeys

Salli Figler
I started my career as a Cobol programmer but have taken different roads that led me to my career in Human Resources.
Boost Your Productivity: Best Software For Dev Teams
#webdev #programming #productivity #devops
Explain JSX like I'm five.
#discuss #explainlikeimfive #javascript #beginners
How to Build a Cool GitHub Profile in 2 Minutes
#tutorial #productivity #design #discuss

Once suspended, figspville will not be able to comment or publish posts until their suspension is removed.

Once unsuspended, figspville will be able to comment and publish posts again.

Once unpublished, all posts by figspville will become hidden and only accessible to themselves.

If figspville is not suspended, they can still re-publish their posts from their dashboard.

Once unpublished, this post will become invisible to the public and only accessible to Salli Figler.

Thanks for keeping DEV Community 👩‍💻👨‍💻 safe. Here is what you can do to flag figspville:

Unflagging figspville will restore default visibility to their posts.