How to debug Drupal 8 Functional tests with XDebug

While converting the old-style functional tests in the MongoDB project from WebTestBase to BrowserTestBase, I stumbled upon a problem: after following the drupal.org instructions to run PHPunit tests from PhpStorm, doing step-by-step debugging in the IDE worked nicely, but then stopped at the first $this->drupalLogin(); call, returning a 404 after a very long delay, although the same call running without debugging worked normally. What could be going on ?

Stepping into UiHelperTrait::drupalLogin(), I noticed the delay occurent during the drupalGet('user/login') call early in the method, before submitting the account identification. Could it be the issue ?

Examining the logs showed the timeout happened at the PHP level, during the opposite direction call performed by Xdebug towards the debugging client, although such calls obviously worked since I'd been stepping through code for hours before that.

The solution was suggested by the always helpful and knowledgeable @berdir : PhpStorm happens to set a limit to the number of simultaneous connections it will accept for debugging, and that limit is 1 by default.

All of a sudden, it made sense: during classical debugging, the PHP interpreter from the host site establishes one connection to the client (the PhpStorm IDE), but when invoking the child site during such a call, a second instance of the interpreter is started and tries to connect too... but is blocked by the single connection limit of the default configuration. 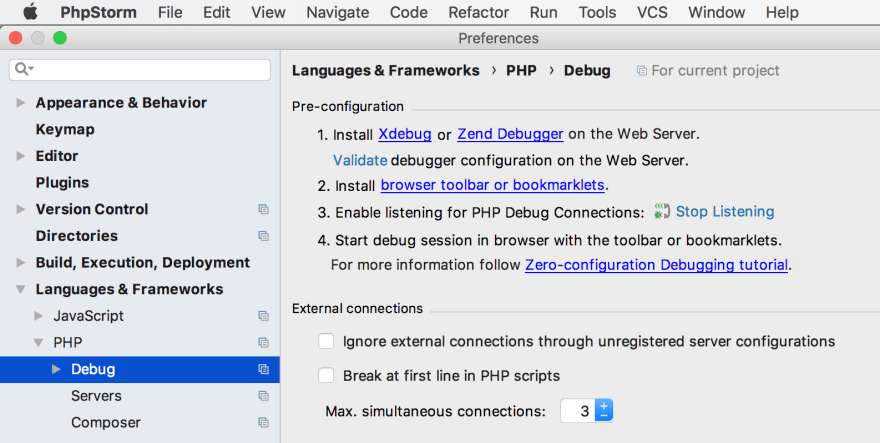 So all it takes is increase the number of connections!

In PhpStorm 2018 and 2019 macOS, the settings can be found at PhpStorm / Preferences / Languages & Frameworks / PHP / Debug in the External connections part of the right pane, as shown below.

No need to restart the IDE or PHP, just restart the debugging run configuration, and it works beautifully.

Once suspended, fgm will not be able to comment or publish posts until their suspension is removed.

Once unsuspended, fgm will be able to comment and publish posts again.

Once unpublished, all posts by fgm will become hidden and only accessible to themselves.

If fgm is not suspended, they can still re-publish their posts from their dashboard.