Ruby was first created by a Japanese programmer named Yukihiro Matsumoto. Initiated from Yukihiro's desire to create a scripting language that has object orientation capabilities. Indeed, at that time object-oriented programming languages ​​were developing but there was no scripting that supported object programming.

Now, Ruby ​​is often used as a programming language that supports website creation. With server-side rendering based, where a website needs to be rendered through a server, it is an advantage, especially for search engine optimization. But the ruby is often equated with python because it has the same basic capabilities.

Python is one of the most widely used programming languages, starting in machine learning, data science, and academia. The beginning appears in 1991, a programmer named Guido van Rossum wanted to help coders in writing logical and clear code for large and small-scale projects.

The python philosophy prioritizes readability by following an object-oriented approach. But what are the differentiating factors of these two programming languages, especially for website development? Better ruby ​​or python? Let's see the direct explanation in this article.

Why Are They Used In Web Development?

MVC Architecture in Ruby on Rails

It was mentioned earlier that these two programming languages can be used for website development or creating websites from scratch. Ruby on rails is designed based on the basic MVC architecture. MVC or Modal View Controller is a software design pattern for developing web applications that consist of 3 parts:

Is Ruby Better Than Python? 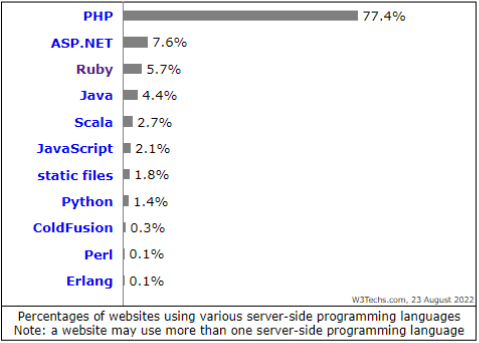 Based on data from W3techs.com it can be concluded that Ruby is superior to Python. There is a big difference in numbers between Ruby (5.7%) and Python (1.4%) of 4.3%. This shows Ruby has a tremendous advantage in web development based on server-side programming languages. Although both are equally fast, efficient, and have a large and loyal community, they cannot be separated from the needs of each website owner. Due to one of the strong assumptions that most website owners want fast prototyping of traffic-heavy applications. In addition, the belief that has been attached to the quality of ruby and its popularity is a factor of excellence over python.

Intended necessity refers to the purpose of the website owner. Because both have advantages that are used according to needs. RoR is widely used by companies because it offers lots of useful libraries and tools that can speed up work. But it has the downside of flexibility for projects that require multiple creative solutions.

While Python is commonly used to automate workflows. For project purposes, it is usually widely used in building website applications, machine learning, and trading applications. The popularity of this use of python tends to lead to data processing or connecting databases.

RoR vs Python: Based on Performance

Both are languages ​​that have similar performance. However, this can be distinguished if it is implemented in a project. Here are the conditions that satisfy both of them for use in the project

Ruby on Rails vs Python: Which Language Is Best For Web Development?

It is indeed very difficult to compare these two languages ​​to choose a project to create or develop a website. Having the speed, advantages, and disadvantages of each as well as its popularity, many website owners often follow the current trend of programming languages. But very few know the use and purpose of using the programming language itself since the beginning of its creation and development. RoR and Python have clearly described their uses and capabilities. If you are not satisfied with this article you can see more resources related to the discussion of ruby ​​on rails on our website.

Is Ruby on Rails Declining? Not If You Build It

Incredibly Useful Ruby on Rails You Need to Know

Why Startups Still Use Ruby On Rails [Real Proof]

Taking a cut with Stripe Connect

Once suspended, ferry will not be able to comment or publish posts until their suspension is removed.

Once unsuspended, ferry will be able to comment and publish posts again.

Once unpublished, all posts by ferry will become hidden and only accessible to themselves.

If ferry is not suspended, they can still re-publish their posts from their dashboard.

Once unpublished, this post will become invisible to the public and only accessible to Emveep#1.

Thanks for keeping DEV Community 👩‍💻👨‍💻 safe. Here is what you can do to flag ferry:

Unflagging ferry will restore default visibility to their posts.