Numbers and Strings are the most common primitive values. Both of them are infinite. Just think it like this if you start counting a number and start writing a string, will there be an end? There are three more types of primitive values. Those are Boolean, Null and Undefined, but they are limited number. Why are they called limited? Boolean has only two values, True and False. There can never be a third Boolean type just as much there can never be a second Null and Undefined.

As a programmer, we all encountered numerous errors. The error may occur for a different reason, and you may not even find out where it even came from. In the case of JavaScript, the script dies if it encounters an error. There is a syntax called try-catch, which helps programmers catch errors more efficiently. The script will not die if your code is inside a try-catch block.

The try-catch syntax has 2 main blocks. 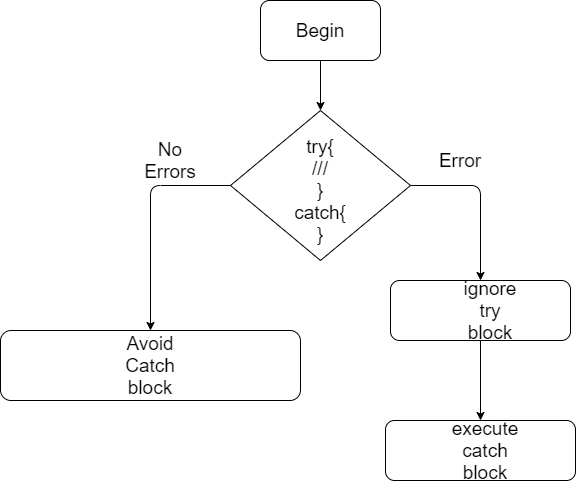 The try-catch block only works if your code is runnable. If your code has syntax errors, the try-catch won't even be executed. It is because JavaScripts first read the code and run it. If an error occurred while reading the code, it is called a parse-time error. These parse-time errors can't be recovered. This is because the JS engine can't understand the code properly. The try-catch only catches errors that occur in valid code. Such errors are called run-time errors.

try-catch only works at runtime

So the first question is What is a Scope? Scope in JavaScript is very different from other programming languages. Specially people coming from typed language like C,C++ or Java will find it pretty weird. Well think of Scope like a relation between parent world and child world. Child can get access to Parent world but Parent can not access to child world. If you remember this simple information you have understood the fundamentals of Scope in JavaScript. Parent world refers to a variable which is declared openly or in root of the program. It means the variable is not inside a function or a statement.

Var was heavily used before ES6 introduced let and const. Varis used withing Global and function/local scope. Now, what is a global scope? Global Scope is the whole application scope. If you define any variable in the global scope, it can be accessed anywhere in the application. Function/Local Scope is defined within a specific function. All the variables declared inside the specific function you can use it. Think of it like this, Global Scope is the parent and Function/Local Scope is the child. Block Scope is defined inside brackets. The following picture will help you understand the scoping concept more clearly.

Now let's run this code and find out what's the result.

You can see that we can get the output of firstName as it is Function Scope, it can be accessed within the es6Example function. On the other hand, lastName variable is undefined because it can not be accessed outside its Block Scope.

Many people seems to have misconception regarding usage of Var & Let because both can be used to reassign the value of a variable. Both are very different from each other. Var works in Global/Function Scope whereas Let works in Block Scope. Var can be use to redefined a variable which is very risky. You can redefine a variable 10000 times and JS will count the last variable's value. So ES6 introduced Let to stop this confusion. You can't redefine a value using Let but can only reassign it inside it's scope.

You can though update a variable using Const.