At Factorial, we maintain an engineering Handbook where we document aspects such as common abstractions, programming principles and documentation of our architecture.

Among these, there are a set of aphorisms stemming from coding best practices and common pitfalls we have been encountering during the last 4 years building our product. Let's share some of these.

Beware, these aphorisms are language-agnostic and, thus, you might find them more or less regularly in your day to day depending on the characteristics of your preferred programming language.

Depend on contracts rather than data structures

This is my personal favorite because it's so simple yet so ubiquitous. Put
bluntly, data structures make for lousy interfaces: they are often opaque, mutable and nullable, all characteristics you wouldn't want for an interface — and yet we use them as such constantly.

The most common example is accepting a hash as a method argument:

NOTE: This is especially prevalent in languages that make it easier to work with data structures and nullables such as Ruby or Javascript.

Using a data structure introduces an implicit dependency between your method and the data structure's shape, a dependency that could have been easily avoided by simply passing the expected value:

In cases where the dependency with the data structure cannot be avoided, isolate it behind an API:

Although this might come across as a superfluous refactor it minimizes the spread of the dependency and paves the way for a future refactor in which we would get rid of this data structure dependency altogether.

Hardly a surprise. All the new cool kids in the block are using it.

The problem with null values was already hinted at in the previous aphorism: it's a very hard contract to enforce. This will result in errors happening far away from the underlying issue:

To avoid null values you can enforce types (if your language supports it), implement the optional pattern, use a custom contract with data validation (such as a Struct) or directly raise an exception closer to the null source.

Or, put another way, do not be too smart for your own good.

As a rule of thumb, your teammates should be able to easily navigate your code using only a pattern-matching tool like grep (or ctrl-f for those using fancier editors).

If that weren't the case it probably means your code is not explicit enough and is hiding dependencies with dangerous techniques like meta-programming:

As if the potential error wasn't bad enough, this technique obfuscates the
author's intention and makes navigating your code more difficult than necessary.

To avoid these pitfalls and improve code quality make extensive use of static analysis tools
such as linters or static type analysis.

In the particular case of meta-programming, replace it with a good ol' Map or switch statement.

Depend on abstractions rather concretions

Lastly, a general principle. If you take a look at most of our previous examples and their proposed solutions, they all share a common property: the solution implements an abstraction.

The advantage of abstractions over concretions is that they change less often, and this is good for code maintainability: 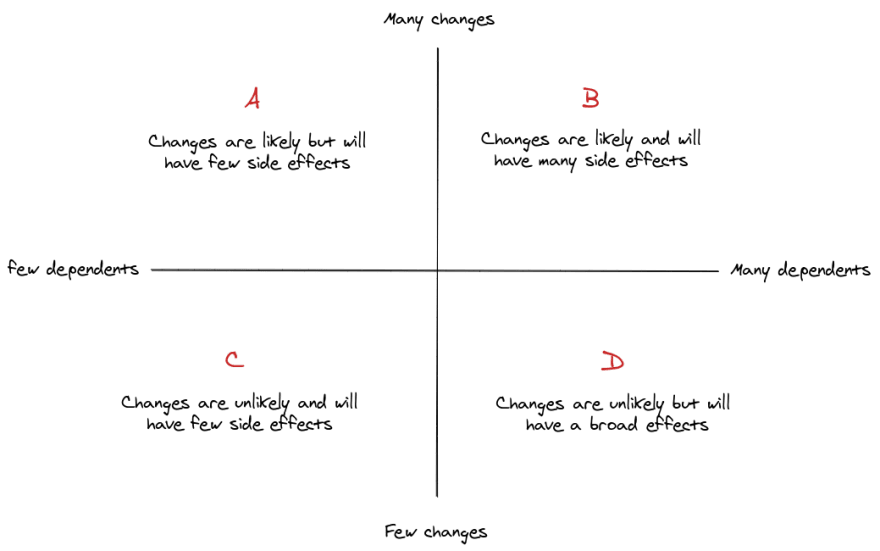 You often cannot control the amount of changes over time, but you can control the number of dependencies. Stay away from zone B and you will be fine.

That's it! We hope you will find some useful tips from this list that you can put to good use in your daily coding practice.

NTLM authentication with Ruby and Faraday

Who's Going To RubyConf?

See positions
A trick with the Ruby documentation
#ruby
Some reasons to avoid Hashes in Ruby and some alternatives to them.
#ruby
A handful of engineering principles at Factorial
#rails #domain #principles #ruby