The concept for this series of articles is to explain what and how the CDK framework interacts with AWS to create cloud infrastructure.
The series will be split into three articles:

The language of reference will be Python.

The AWS CDK lets you build reliable, scalable, cost-effective applications in the cloud with the considerable expressive power of a programming language.
- Official docs

Currently the supported languages are Typescript, Python, Go, C#, and Java. The definition of the infrastructure then is done through programming languages that allow for greater flexibility and maintainability than Cloudformation, as well as the fact that it is not necessary to learn new semantics, but rather it is enough to know a language and the aws_cdk libraries/API. The output of CDK is a Cloudformation file that can be used to deploy your infrastructure.

CDK is a framework that allows the creation of infrastructure exclusively on AWS, making it locked to a single vendor; however, there are alternatives such as Pulumi or Terraform, which give the ability to interface across multiple providers. What you recommend then is to evaluate well the purpose and goals of your cloud structure. Although I think that multi-cloud makes sense in a few business contexts.

To elaborate further, there are also two other CDK frameworks:

CDK can be divided into three distinct phases, bootstrap, synth, and deployment, let's look at them in detail:

The concept behind CDK is that by using one programming language among those supported it is possible to implement the AWS infrastructure for your services, as seen above it is divided into several phases, and it is possible to manage each phase separately thus having full control over provisioning.
The versatility of CDK allows you to define multiple stacks in the same repository and manage their deployment separately and independently, so there are three key files to consider:

To recap we have our repository containing configuration files, dependencies, and one or more stack files.
Each stack file defines the services to be created, specifically, each stack class uses modules for each service it is intended to implement. The modules contain the service constructors, which can be of two types: 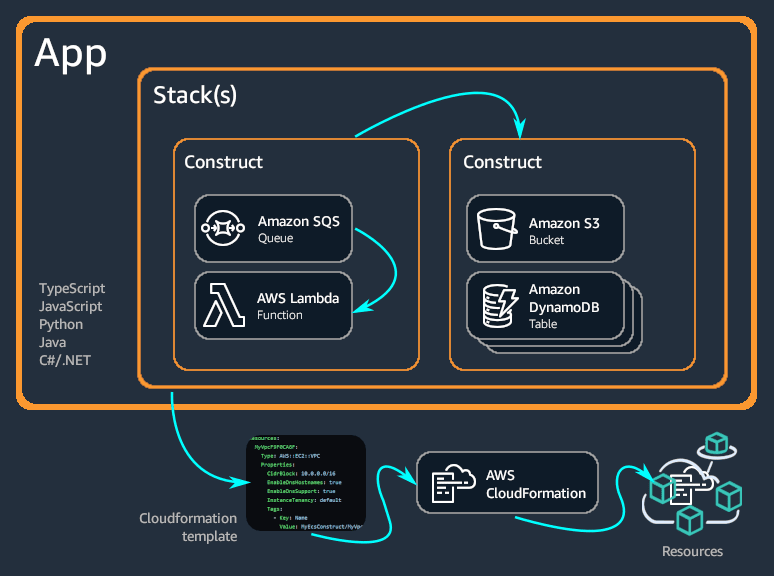 Our goal is to create the infrastructure with CDK.
You can clone the project related to this series from then
https://github.com/FabrizioCafolla/cdk-demo or follow the following steps by hand:

In this case we defined constraints on the region, and set the Synthesizer defining which bucket to fetch Cloudformation files from. Of defualt the synthesizer parameter can be non-passed but only in case the --toolkit-bucket-name option was not used at bootstrap, which allows you to choose a name instead of letting it be defined automatically

Notice well how in step 3 resources are defined through L2 constructs (in this case an S3 bucket) while in step 4 stacks are implemented (in this case CdkDemoStack).

There are some of the best practices that should be followed to have more control over the infrastructure:

Creating the infrastructure directly on Cloudformation is now ever discouraged, as it is not very maintainable, but more importantly, it requires knowledge of a syntax that is not exactly easy (enough on yaml or json), so it is recommended to use CDK.
Another consideration is that as much as CDK is tied to AWS, the fact that it is written in a programming language then allows for integration with Pulumi or Terraform (if using cdktf) with the respective language, so that they can work in synergy.
The CDK community is very active, mainly because you will see tutorials or other things based on Typescript, but the constructs are the same for all supported languages.
The following site constructs offers basic constructs/snippets to implement your services.

Once suspended, fabriziocafolla will not be able to comment or publish posts until their suspension is removed.

Once unsuspended, fabriziocafolla will be able to comment and publish posts again.

Once unpublished, all posts by fabriziocafolla will become hidden and only accessible to themselves.

If fabriziocafolla is not suspended, they can still re-publish their posts from their dashboard.

Once unpublished, this post will become invisible to the public and only accessible to Fabrizio Cafolla.

Thanks for keeping DEV Community 👩‍💻👨‍💻 safe. Here is what you can do to flag fabriziocafolla:

Unflagging fabriziocafolla will restore default visibility to their posts.