As the world gets more and more connected, software applications are of course no exception. Apps need a way to have 2 or more completely separated systems share information.

Webhooks are automated messages sent from apps when something happens. They have a message (or payload), and are sent to a unique URL. Webhooks are almost always faster than polling, which makes them an ideal solution for pushing events from a system to the outside world.

They are widely used in industry giants like Shopify, Stripe, Twitter & Twilio. If you look at PayPal, webhooks are how PayPal tells your eCommerce app that your clients paid you.

In this post I'll introduce a webhook delivery system solution using Apache Kafka, AWS SQS and S3. In the past, my company had different implementations for sending out events via webhooks in different products. We decided to consolidate them into a single unified solution.

So, if you're considering building your own webhook delivery system, this blog is for you!

Let's look at what we wanted to get from the new webhook delivery system, and why:

We did allow ourselves some leniency:

Right off the bat it was clear to us that our system would have 2 main tiers: The API (used for configurations) and the Brain (actual sending of webhook events). Let’s look at each of them separately…

Used for registering and configuring webhooks. We decided to go for the most straightforward solution and have a REST API. The API can be used by an end user (the webhook subscriber) or by another application. 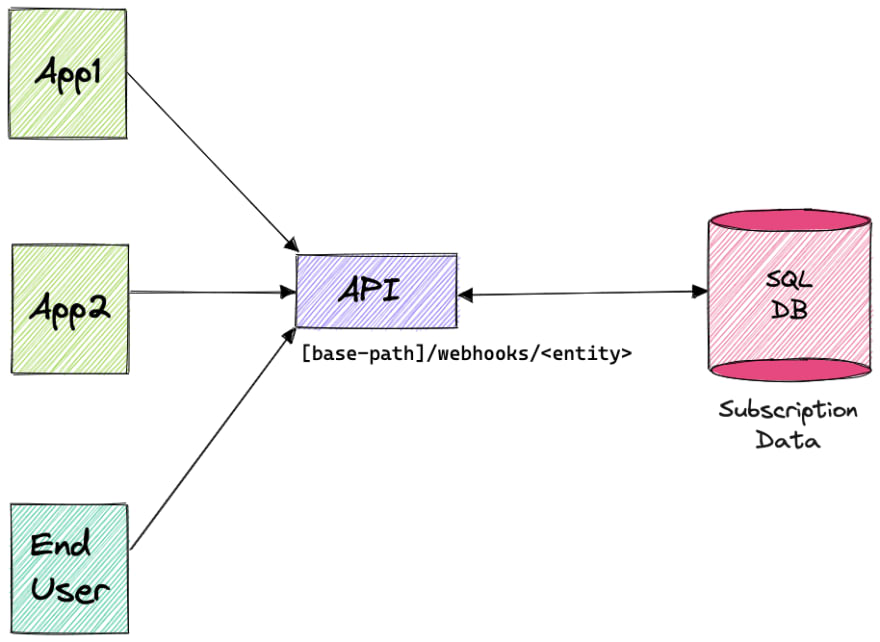 The endpoints URL is structured as [base-path]/webhooks/<entity>.

Each entity has support for the following operations:

To create a webhook there is a 3 step process:

The tier that will be responsible for the actual sending of webhooks. It is sensible to break it down to even smaller pieces, allowing us to scale different areas of the system independently from other areas that do not need the same scaling. 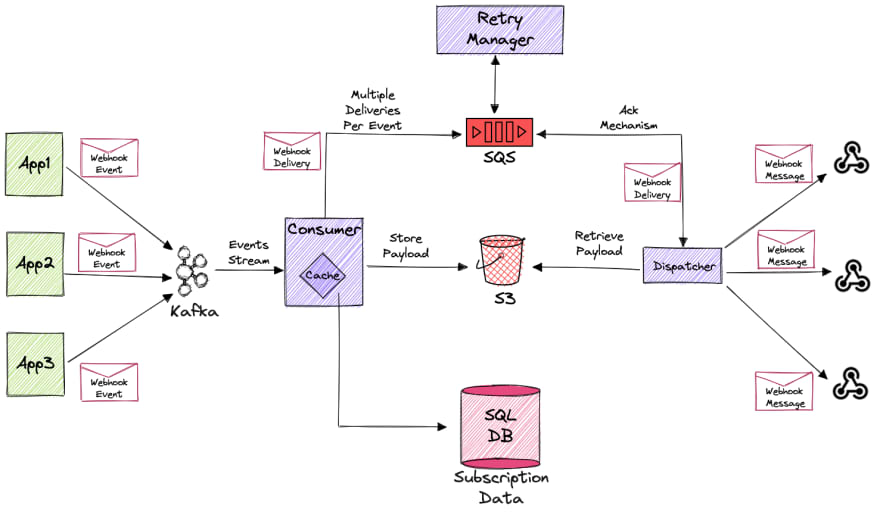 The consumer handles webhook events from Kafka and decides (based on the subscription data) what Webhook Targets are applicable. Once deciding that, it generates a Webhook Delivery for each target that needs to get the event, and publishes it to an AWS SQS queue.

Since SQS has a limit of 256KB per message, and we have larger messages than that, we store the message payload in S3 for future retrieval.

The dispatcher is the part of the system that performs the actual sending of the event payload as a Webhook Message to the relevant URL. It gets the delivery created by the consumer from the AWS SQS queue, and performs an HTTP POST call to the desired URL with the delivery payload. It is a separate module in order to allow dealing with performance interference issues, but more on that later.

As mentioned in the requirements, sending webhooks can fail, so we must have a mechanism to retry the operation (exponential backoff within up to 24h). After failing to find an existing solution that meets our requirements, we decided to implement it ourselves, using the power of SQS delayed messages and S3 for payload storage. For an in-depth dive into this topic, please refer to my upcoming blog post (link at the end of this post).

This article only touches on subjects like how we solved problems relating to real life (such as retry management) or performance (Caching and I/O operations).
Also, very interesting and challenging topics that should be addressed are the usage in a multi-tenant SaaS system. There are more issues to consider when integrating it with such a system. Issues like starvation and performance interference, security (CRC, Signature Header Validation), data separation, and much more.
For all these issues, I invite you to check out my upcoming post - Addressing the challenges of a webhook delivery system in a multi-tenant SaaS system.

Eyal Ringort
An experienced backend software engineer, with vast experience developing complex software, specialized in microservices architecture and distributed systems
Finnaly joined the team of devs at 'dev.to'. I am happy to be here.
#newuser #webdev #discuss #community
How long is too long to stay at a company?
#anonymous #discuss #career
My Current GitHub Profile
#github #showdev #career #discuss

Once suspended, eyalrin will not be able to comment or publish posts until their suspension is removed.

Once unsuspended, eyalrin will be able to comment and publish posts again.

Once unpublished, all posts by eyalrin will become hidden and only accessible to themselves.

If eyalrin is not suspended, they can still re-publish their posts from their dashboard.