tl;dr: If you use Elixir and like Airtable, check out a new library I wrote called ExAirtable.

At EXPLO, we often reach for Airtable when we're trying out new ideas. We love it because it really reduces friction for putting together simple relational systems that are the backbone of knowledge work. We are also very happy with Elixir and Phoenix when it comes time to build apps for the web, which seems to happen more and more these days!

I've often wondered whether we could use Airtable as a content management back-end for some of these sites. It solves a few problems that we consistently have:

We've used Ruby with Sinatra or Rails and the excellent AirRecord library to do Airtable-based sites before. But for Elixir, the current Airtable API libraries didn't seem to be in active development, and didn't have features like rate-limiting or caching. But it would be so cool if we had an Elixir library that would allow us to handle Airtable rate-limiting and caching as a single Elixir-native dependency!

Meanwhile, Ricardo Garcia Vega wrote this amazing article demonstrating the use of Elixir and Phoenix as a caching layer for Airtable for a content management system. This "native" Elixir solution was just the push I needed to fix Elixir's Airtable library problem.

So here's the buried lede: I wrote an Airtable library (actually two! read onward...) for Elixir called ExAirtable. This library aims to provide a solid foundation to use Elixir (with or without Phoenix) with Airtable interaction. It handles rate-limiting against the Airtable API, and (optionally) caches all requests in local memory to drastically speed up reads.

I designed ExAirtable to work in two different ways:

Here's how the system comes together: 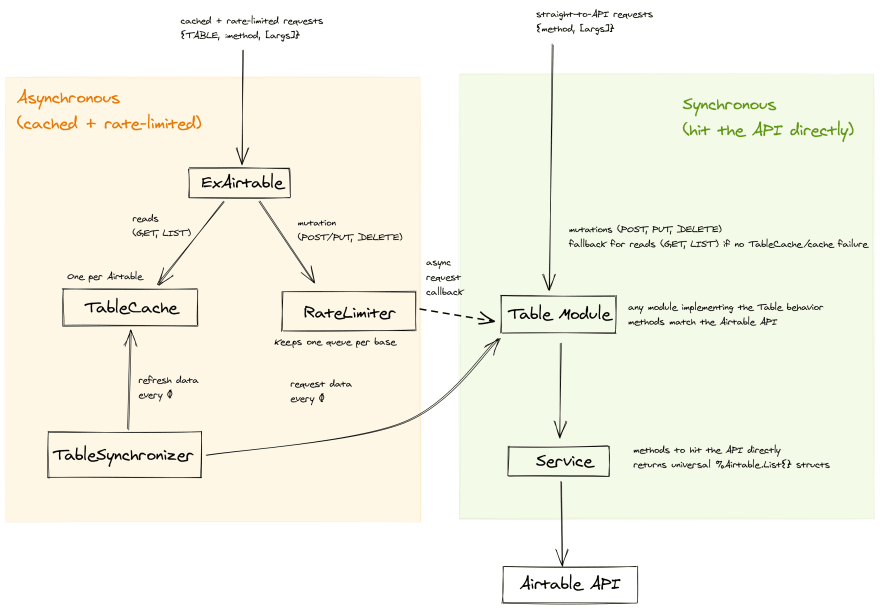 If you decide to run the service in cached and rate-limited mode, here's how the supervision tree comes together: 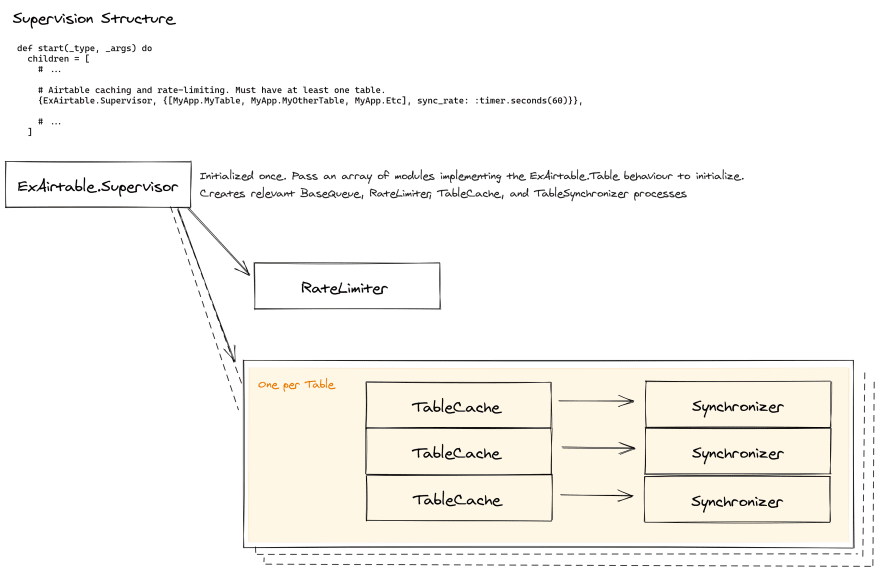 If folks are interested, I can write more articles with code examples. In the meantime the documentation has tons of examples and information. I've tried hard to make it comprehensive and useful all by itself, which is a truly game-changing trick that I've learned from the Elixir community.

Use with Phoenix and/or Ecto

Realistically, most folks who want to try this with Elixir are going to use Phoenix as their application framework. Since Phoenix plays so well with Ecto, I found it beneficial to create a set of conventions around creating ExAirtable Table models in an Ecto context with embedded schemas.

Once again, I can write more follow-up if folks are interested. In the meantime, give it a try and let me know what you think!

Elixir script, what can and can't be done

How we Created an in-Browser Kubernetes Experience

WHAT IF? UltronEx and Liveview

Once suspended, explo will not be able to comment or publish posts until their suspension is removed.

Once unsuspended, explo will be able to comment and publish posts again.

Once unpublished, all posts by explo will become hidden and only accessible to themselves.

If explo is not suspended, they can still re-publish their posts from their dashboard.

Once unpublished, this post will become invisible to the public and only accessible to Donald Merand.

Thanks for keeping DEV Community safe. Here is what you can do to flag explo:

Unflagging explo will restore default visibility to their posts.