The series consists of four parts; each part uses the concepts discovered in the previous parts:

The Elliptic Curves Digital Signature Algorithm works exactly over the algebra that we’ve just discovered in the previous part.

This algorithm allows a person to sign a message using his or her PrivateKey, so that anyone else can verify that the signature actually belongs to that person, knowing their PublicKey.

This is what actually happens when you sign a message in blockchains:

You just generate some message like “I want to send X amount of crypto to address Y”, and then you sign that message (using exactly the algorithm discovered in this article).  Other parties can verify that the message was actually signed by you.

Everything spins around one certain predefined point G, lying on a predefined elliptic curve.

We can generate any random integer and call it our PrivateKey.

If we multiply this PrivateKey to point G, we will get the PublicKey.
So PublicKey = PrivateKey * G: 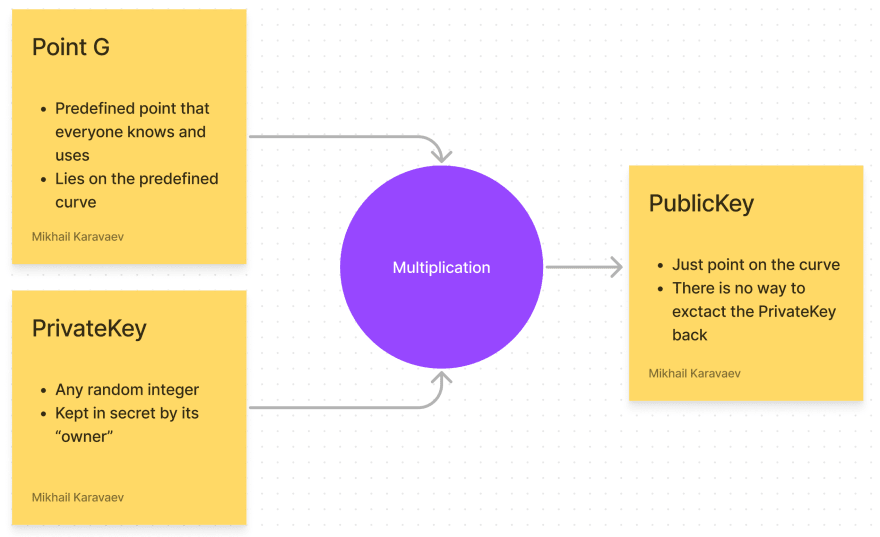 Yes, PublicKey is just a point on a curve.

As we already know, we can't divide point by point or point by a scalar value. All possible operations are listed at the end of Part 1.

So there is no efficient way to get the PrivateKey back because we can't divide PublicKey by G. This operation doesn't exist. Brute-forcing potentially works, but when there is really giant number of possible points, for example, that giant:

In ECDSA we have this set of “global” public variables. They are specified by standards:

Here are the variables that belong to a certain owner:

And, variables that are specific to one signing operation: 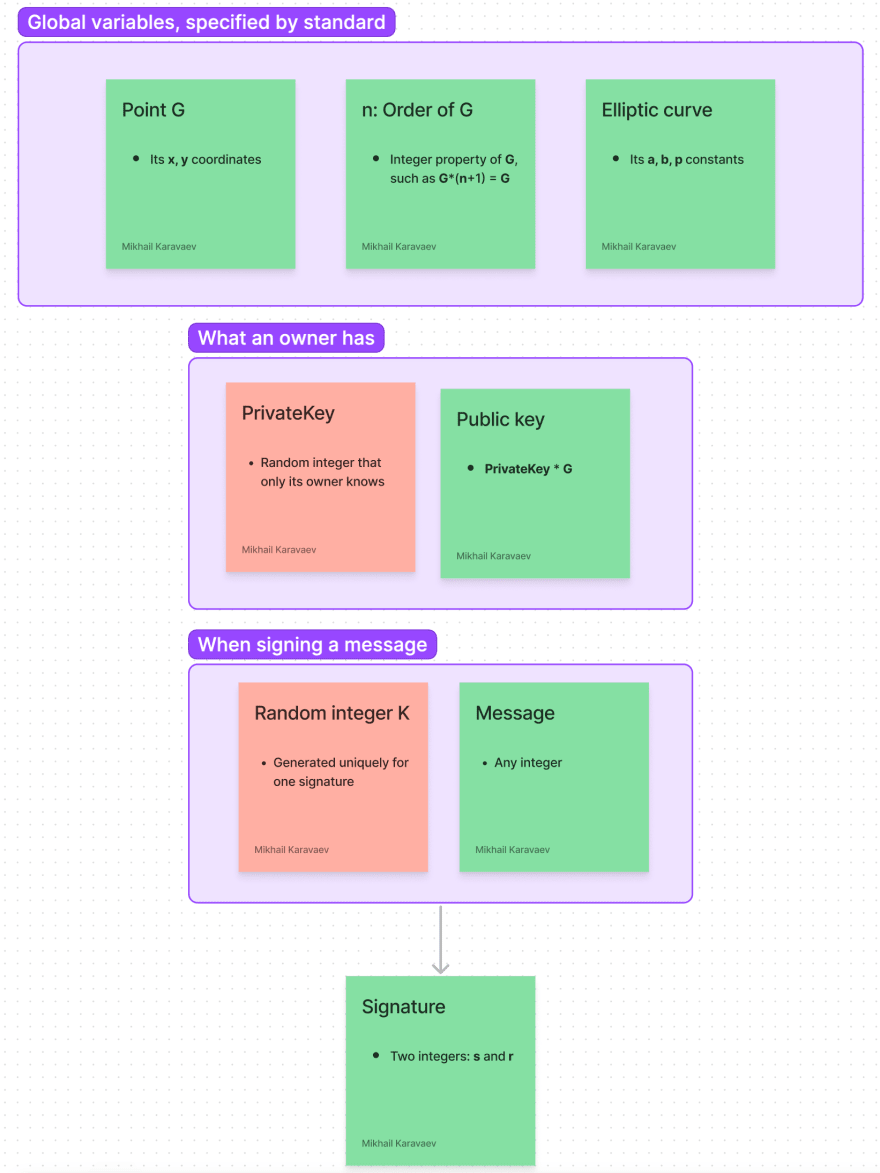 Way too many variables!
Here are the algorithms for signing and verifying a message:

The algorithm for signing a message:

We have our PrivateKey and message. To sign a message, we should*:*

Here is the visual representation of the algorithm: 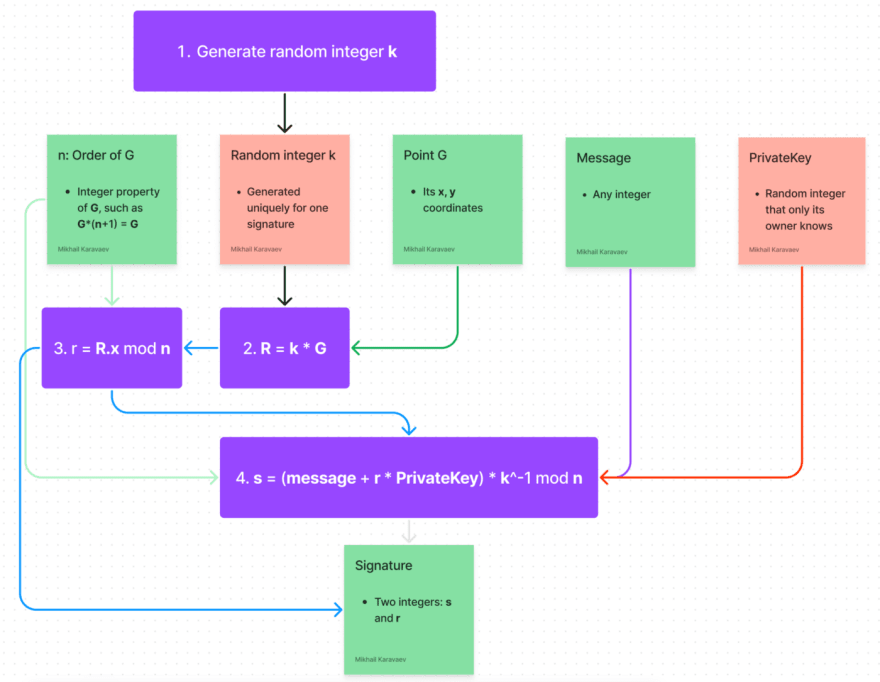 The algorithm for verifying a signature

We have the signer’s PublicKey, message, and signature(r, s). 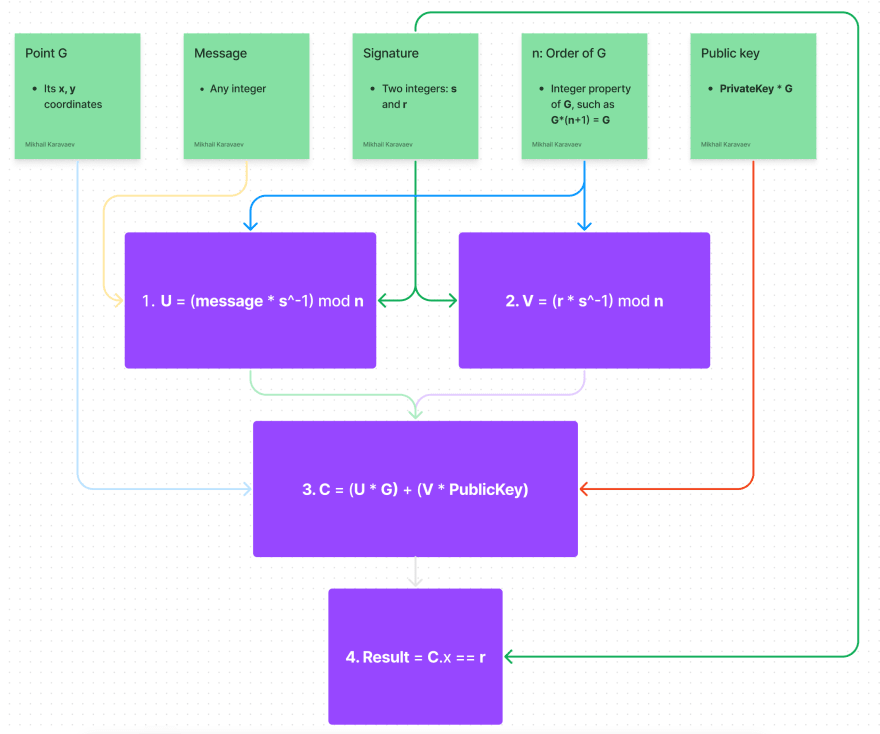 Not obvious at all!

Actually, this is just a mathematical trick.

Let’s play with our formulas and prove that it works!

Let’s substitute the variables U, V, and PublicKey with their definitions:

Notice that G * s^-1 is duplicated. Let’s simplify the formula:

Let’s see the definition of s in step 4 of the signing algorithm:

Let’s substitute s^-1 in our formula:

For the elliptic curve:

The next part is going to be the easiest part for programmers. For everyone else, it’s not necessary to follow. Just proceed to the Live Demo at the end of the next part.

Creating a website aggregator with ChatGPT, React, and Node.js 🚀

9 Common JavaScript Interview Questions You Might Not Know The Answer For.

Once suspended, exemak will not be able to comment or publish posts until their suspension is removed.

Once unsuspended, exemak will be able to comment and publish posts again.

Once unpublished, all posts by exemak will become hidden and only accessible to themselves.

If exemak is not suspended, they can still re-publish their posts from their dashboard.

Once unpublished, this post will become invisible to the public and only accessible to Mikhail Karavaev.

Thanks for keeping DEV Community 👩‍💻👨‍💻 safe. Here is what you can do to flag exemak:

Unflagging exemak will restore default visibility to their posts.