It is a set of principles to have good software design practices compiled by Uncle Bob.

Why should I use them?

If you don't use SOLID, you probably code STUPID¹ without knowing it

What does SOLID stands for

SOLID is an acronym that stands for:

What do we do 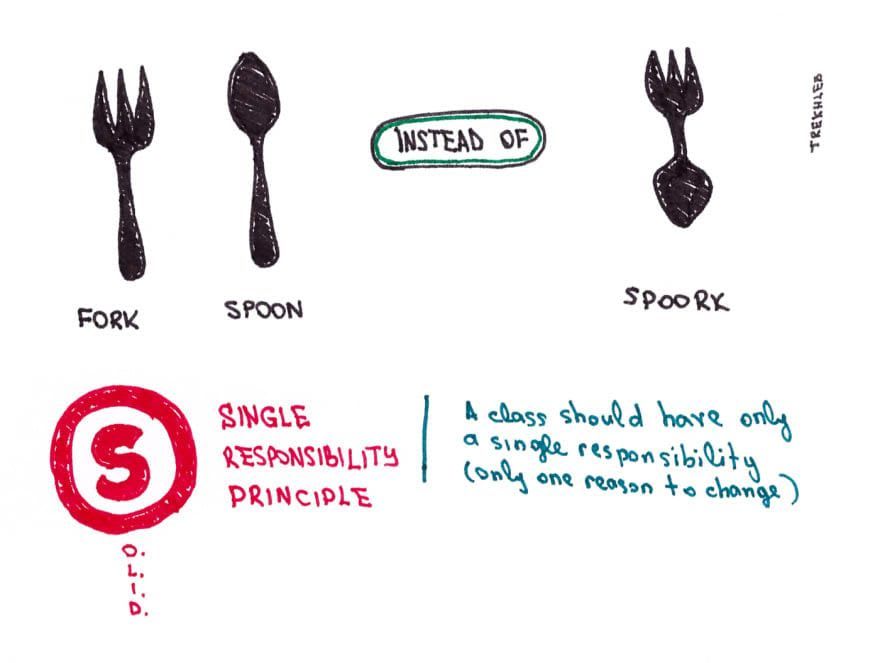 Let's imagine we have a class that represents a text document, said document has a title and content. This document must be able to be exported to HTML and PDF.

Violation of the SRP 👎

⚠️ Code coupled with more than one responsibility

As you may see the methods or functions that we expose as APIs for other programmers to use, include the getTitle() and the getContent() but these methods are being used within the behavior of the same class.

This breaks the Tell-Don't-Ask principle:

💬 Tell-Don't-Ask is a principle that helps people remember that object-orientation is about bundling data with the functions that operate on that data. It reminds us that rather than asking an object for data and acting on that data, we should instead tell an object what to do.

Finally, we also see that the class that must represent a document not only has the responsibility of representing it, but also of exporting it in different formats.

Once we have identified that the Document class should not have anything other than the representation of a "document", the next thing we have to establish is the API through which we want to communicate with the export.

For the export we will need to create an interface that receives a document.

The next thing we have to do is extract the logic that does not belong to the class.

This makes it easier for both the exports and the documentation class to be better tested. 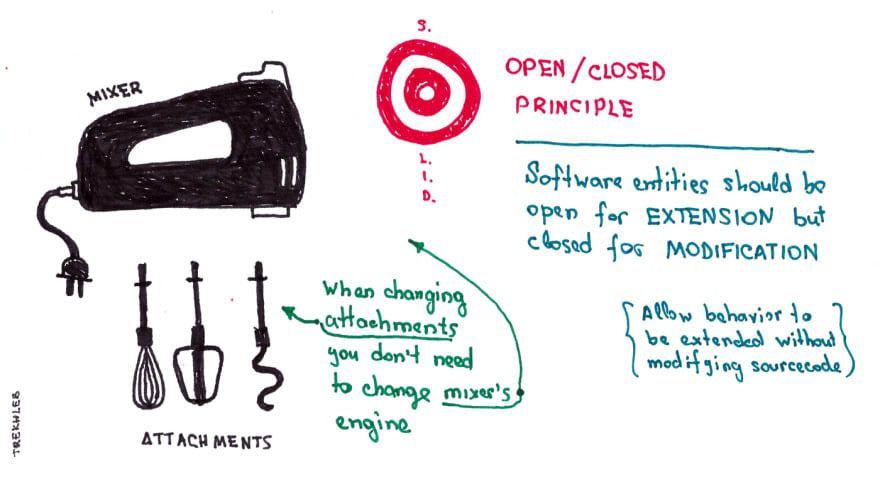 💡 Objects or entities should be open for extension, but closed for modification.

Let's imagine that we need to implement a login system. Initially to authenticate our user we need a username and a password (Main use case), so far so good, but what happens if we require or from business require that the user authenticate through Twitter or Gmail?

To begin with, if a situation like this arises, it is important to understand that what is being asked of us is a new feature and not that we modify the current one. And that the case of Twitter would be one use case and that of Gmail another totally different.

The first thing we should do is create an interface that complies with what we want to do and that fits the specific use case.

Now we should decouple the logic that we had already created for our use case and implement it in a class that implements our interface.

As you can see, the LoginService class is agnostic of which authentication method (via web, via google or twitter, etc).

A very common case is when we have a switch(), where each case performs a different action and there is the possibility that in the future we will continue adding more cases to the switch. Let's look at the following example.

Here we have a controller with a pay() method, which is responsible for receiving the type of payment through the request and, depending on that type, the payment will be processed through one or another method found in the Payment class.

This code has 2 big problems:

The first thing we could do to try to comply with the OCP is to create an interface with the pay() method.

Now we will proceed to create the classes that should implement these interfaces.

The next step would be to refactor our pay() method.

👁 As you can see, we have replaced the switch with a factory.

Benefits of the Open / Closed Principle

🎨 Design patterns that we can find useful for OCP 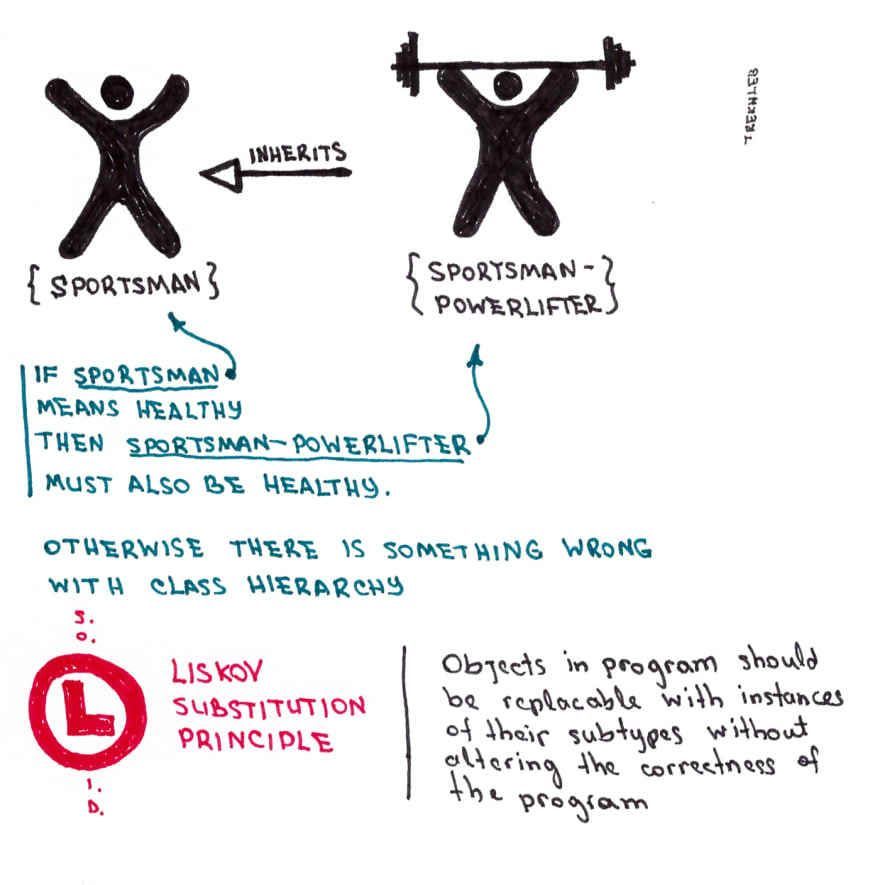 This principle was introduced by the guru and the first woman in America to earn a Ph.D. in Computer Science, Barbara Liskov. And it is a very interesting principle.

According to Wikipedia. Liskov's Substitution Principle says that each class that inherits from another can be used as its parent without having to know the differences between them.

There are 3 important points that we have to keep in mind in order not to violate the Liskov principle:

Let's say we have a Shipping class that is going to calculate the shipping cost of a product given its weight and destination.

The problem is that we generate with a class like the previous one is that we are exposing a similar API for programmers, but that has a different implementation.

This class will be the parent class of our example where its method to calculate the shipping price has a pre and a post condition (this way of programming using the pre and post conditions is called Defensive Programming).

For example, a programmer on our team is sure that the calculateShippingCost() method, of the Shipping class, allows null destination and shipping costs greater than zero, so by wanting to use the WorldWideShipping class, it could cause the system to burst, for example, if you want to use the result of calculateShippingCost() in a slice or by giving it a null destiny.

Therefore, the WorldWideShipping class is violating the Liskov substitution principle.

The invariants are values ​​of the parent class that cannot be modified by the child classes.

Let's say we want to modify the Shipping class that we had before and we want to make the limit of the weight per kilos be 0 but that it is in a variable.

The easiest way to avoid this would be to simply create the variable $weightOfPackageKg as a private constant if our version of PHP (7.1.0) allows it but by creating that private variable.

Historical restrictions say that there cannot be a method in the child class that goes against a behavior of its parent class.

That is, if in the parent class there is the FixedTax() method, then the ModifyTax() method cannot exist in the child class. Or didn't they teach you not to disobey your parents? 😆.

For a method of the subclass to modify the value of a property of the base class is a violation of the Liskov principle because classes must be able to change the value of their properties only (Encapsulation).

The easiest way not to break the LSP

The best way not to break LSP is by using Interfaces. Instead of extending our child classes from a parent class.

By using interfaces you can implement methods that various classes have in common, but each method will have its own implementation, its own pre and post conditions, its own invariants, etc. We are not tied to a parent class.

⚠️ This does not mean that we start using interfaces everywhere, although they are very good. But sometimes it is better to use base classes and other times interfaces. It all depends on the situation.

¹. Design pattern Template Method: It states that in the abstract class we would define a method body that defines what operation we are going to perform, but we would be calling some methods defined as abstract (delegating the implementation to the children). But beware! 👀 this implies a loss of traceability of our code.

🎨 Design patterns that can be useful to us in the LSP 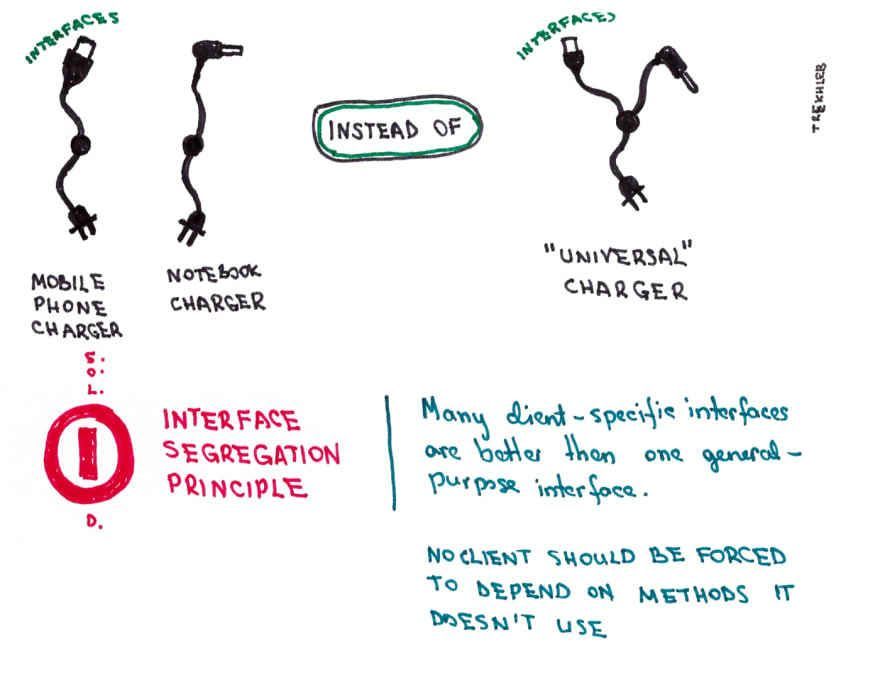 Basically, what this principle refers to is that we should not create classes with thousands of methods where it ends up being a huge file. Since we are generating a monster class, where most of the time we will only use some of its methods each time. And for that it refers to the need for interfaces, it is also important to understand that this helps a lot at the Single Responsibility Principle(SRP).

💬 A header interface is an explicit interface that mimics the implicit public interface of a class. Essentially you take all the public methods of a class and declare them in an interface. You can then supply an alternative implementation for the class. This is the opposite of a RoleInterface - I discuss more details and the pros and cons there.

💬 A role interface is defined by looking at a specific interaction between suppliers and consumers. A supplier component will usually implement several role interfaces, one for each of these patterns of interaction. This contrasts to a HeaderInterface, where the supplier will only have a single interface.

We want to be able to send notifications via email, Slack, or txt file. What signature will the interface have? 📨

We can rule out that options B, C and E, since Header Interface would be based on the implementation (for Slack, email and file respectively).

In the case of option D, we could consider it invalid given that the type $destination It does not offer us any specificity (we do not know if it is an email, a channel ...).

Finally, in option A, we would only be sending the content, so the particularities of each of the types of notification would have to be given in the constructor (depending on the use case you could not always).

👁 The interfaces belong to the clients and not to those who implement them.

A simple example would be the following situation. Let's imagine that we have developers, a QA team and a project manager who have to determine whether to program.

Let's say the programmer can program and test, while the QA can only test.

If we pay attention we will see that the Tester class has a method that does not correspond to it since it is not called and if it is called it would give us an Exception.

So we should make a small refactor to be able to comply with the principle of segregation of interfaces.

The first thing is to identify what actions we have to perform, design the interfaces and assign these interfaces to the corresponding actors depending on the use case.

This code does comply with the principle of segregation of interfaces. As with the previous principles.

🎨 Design patterns that can be useful to us in the ISP 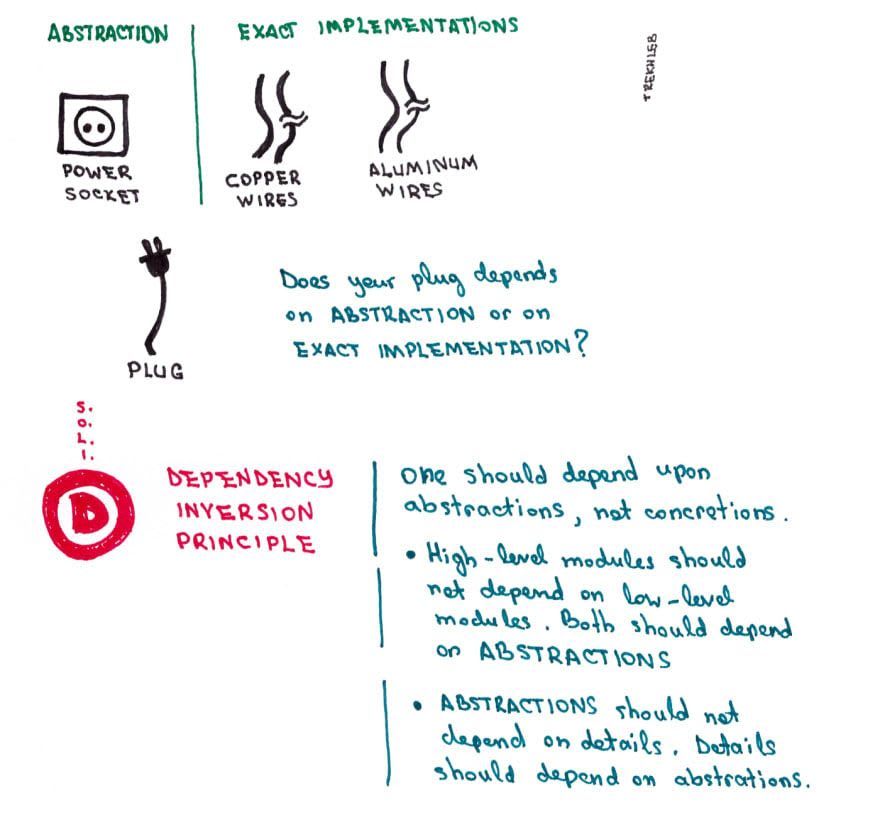 💡 High-level modules should not depend on low-level ones. Both should depend on abstractions

The principle of dependency injection tries to maintain a low coupling.

Let's say we have a UserController. What in its index method what it does is return a JSON list of users with the users created the previous day.

This code wouldn't be bad, because it would clearly work. But at the same time it would generate the following problems:

As we can see, all classes implement the UserRespositoryInterface interface. And this gives us the freedom to get the users either from Eloquent, fromSQL or from a CSV 👏😲 file.

This is fine and would work in a normal application, but how do we make the Laravel controller receive that repository in its index method?

The answer is registering the interface with which class it has by default.

In other frameworks like Symfony it can be done using PHP DI.

Install PHP and Composer in MontereyOS

Emmanuel Valverde Ramos
I am passionate ❤️ about computing in general and programming 👨‍💻 in particular, I started messing around with computers when I was 16 years old, today I am a web developer with over 5 years
What is your preferred programming language and why?
#discuss #webdev
What are your favorite features of HTML5?
#discuss #anonymous #html
What's your most used JavaScript framework?
#javascript #webdev #discuss #react