Spring is a very popular tool in Rails application development (especially since it has been added to the Rails default Gemfile).

Your codebase and the number of dependencies grow the application boot time increases as well. It could take a dozen seconds before rails c becomes responsive.

Spring tries to solve this problem by loading application code once and reloading it when necessary. Why "tries"? Well, because sometimes it fails to reflect the changes.

Let me share some tricks on working with Spring.

Suppose that you store some configuration in a file called config/my_config.txt.

Spring won't reload the application if you change this file unless you explicitly tell it to do that:

What if your configuration depends on something unwatchable? Consider an example:

The value of ActiveRecord::Base.dump_schema_after_migration is populated once on the initial load. What if you add a migration later? The dump won't be generated.

To handle this situation, we must use Spring.after_fork callback:

But what if someone in your team not using Spring? We should take care of it:

NOTE: you've probably noticed that we're checking for the presence of ::Spring::Application constant and not just ::Spring. It turned out that some gems also initiate the ::Spring constant even without spring itself.

RSpec has a feature of running tests in a random order.

It generates a random seed on load and uses it later to order the tests.

When running tests with Spring, this seed value is not reloading–your tests order is always the same (note: while Spring server is running)!

Hopefully, we already know how to fix this:

That snippet should be probably included into the default rails_helper.rb by default.

Unfortunately, it's almost impossible to avoid such caveats when using Spring. 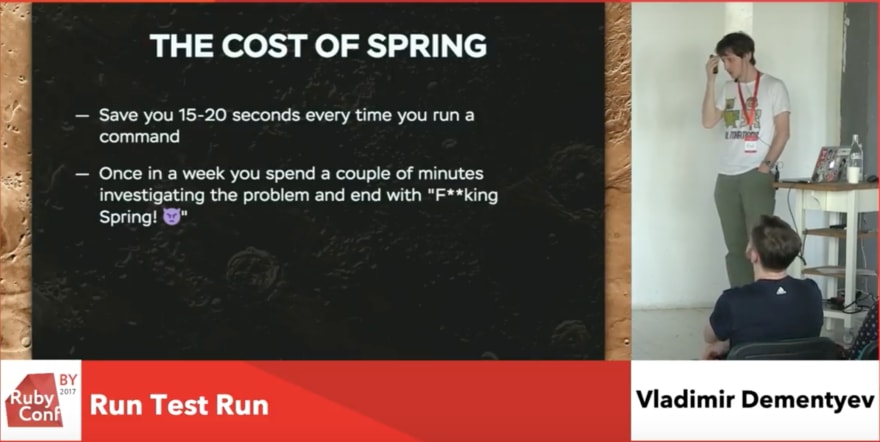 Nowadays I prefer to disable it entirely (and rely on bootsnap instead).

What if other developers on your team are still in love with Spring? We need a way to disable it locally.

Spring provides a way to do that out-of-the-box: set DISABLE_SPRING=1 environment variable and you're done.

This approach has some disadvantages:

I found a much better (IMO) way to do that: toggle the Spring state depending on the presence of .offspring file in your project root.

All you need is to add a single line to your bin/spring:

Now you can enable/disable Spring with the following commands:

Working with Strings in Ruby(Part 1)