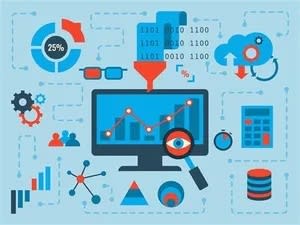 Let's start with understanding what exploratory data analysis (EDA) is. It is an approach to analyzing data sets to summarize their main characteristics, often using statistical graphics and other data visualization methods. Simply put, it is the process of investigating data. This blog is a guide to understanding EDA with an example dataset.

Before we know how, we should first understand why. Why perform EDA at all? Imagine you and your friends decide to go on a vacation to a beach destination neither of you has been to. At first, all of you are bummed. You don't know where to begin. Being a good planner the first question you would ask is, what are the best beach destinations? The next natural question would be, what is our budget? Consequently, you would then ask, what accommodations are available in that area and finally you'd find out the ratings and review the hotel you plan to stay at.

Whatever investigating measures you would take before finally booking your stay at your destination, is nothing but what data scientists in their lingo call Exploratory Data Analysis.

EDA is all about making sense of the data in hand, before getting them dirty with it.

To share my understanding of the EDA concept and techniques I know, I'll take an example of the Pima Indians diabetes data set. A few years ago research was done on a tribe in America which is called the Pima tribe (also known as the Pima Indians). It is this research data we will be using.

First a little knowledge of diabetes. Diabetes is one of the most frequent diseases worldwide and the number of diabetic patients are growing over the years. The main cause of diabetes remains unknown, yet scientists believe that both genetic factors and environmental lifestyle play a major role in diabetes.

Our Data dictionary:
Below is the attribute information:

Now that we understand a little about our data set and the goal of the analysis ( to understand the patterns and trends of diabetes among the Pima Indians population), let's get right into the analysis.

To start with, I imported the necessary libraries ( pandas, NumPy, matplotlib, and seaborn).

Note: Whatever inferences and insights I could extract, I've mentioned with bullet points and comments on the code starts with #.

*Reading the given dataset *

Let's find the number of columns

Let's show the first 10 records of the dataset.

Finding the number of rows in the dataset.

Now let us understand the dimensions of the dataset.

For all kinds of dataframes and series, it will return dimension 1 for series that only consists of rows and will return 2 in case of DataFrame or two-dimensional data.

The size of the dataset.

It returns the size of the DataFrame or a series which is equivalent to the total number of elements.

Let us now find out the **data types **of all variables in the dataset.


- We can then conclude there is no missing values in the dataset. ## Statistical summary Now let us do a statistical summary of the data. We should find the summary statistics for all variables except 'outcome' in the dataset. It is our output variable in our case. Summary statistics of data represent descriptive statistics. Descriptive statistics include those that summarize the central tendency, dispersion and shape of a dataset’s distribution, excluding NaN values. ``` #excludes the outcome column pima.iloc[:,0:8].describe() ``` From the results we can make out a few insights - The pregnancy numbers appear to be normally distributed whereas the others seem to be rightly skewed. (The mean and std deviation of pregnancies are more or less the same as opposed to the others). - Highest glucose levels is 199, pregnancies 17 and BMI 67. Now to the fun part. **Data Visualization** Plotting a distribution plot for variable 'Blood Pressure'. displot() function which is used to visualize a distribution of the univariate variable. This function uses matplotlib to plot a histogram and fit a kernel density estimate (KDE). ``` sns.displot(pima['BloodPressure'], kind='kde') plt.show() ``` ![Histogram of the Blood Pressure levels](https://dev-to-uploads.s3.amazonaws.com/uploads/articles/hplo1dmvr7t5nlwn01em.png) - We can interpret from the above plot that the blood pressure is between the range of 60 to 80 for a large number of the observations. This implies that most people's blood pressure range from 60 to 80. **What is the BMI of the person having the highest glucose** Max() method finds the highest value. ``` pima[pima['Glucose']==pima['Glucose'].max()]['BMI'] ``` - The person with the highest glucose value (661) has a bmi of 42.9 **Finding Measures of Central Tendency (the mean,median, and mode) ** ``` m1 = pima['BMI'].mean() # mean print(m1) m2 = pima['BMI'].median() # median print(m2) m3 = pima['BMI'].mode()[0] # mode print(m3) ```

*How many women's Glucose levels are above the mean level of Glucose
*
mean() method finds the mean of all nimerical values in a series or column.

it then saves this into a new dataframe pima1

Getting a pairwise distribution between Glucose, Skin thickness and Diabetes pedigree function. 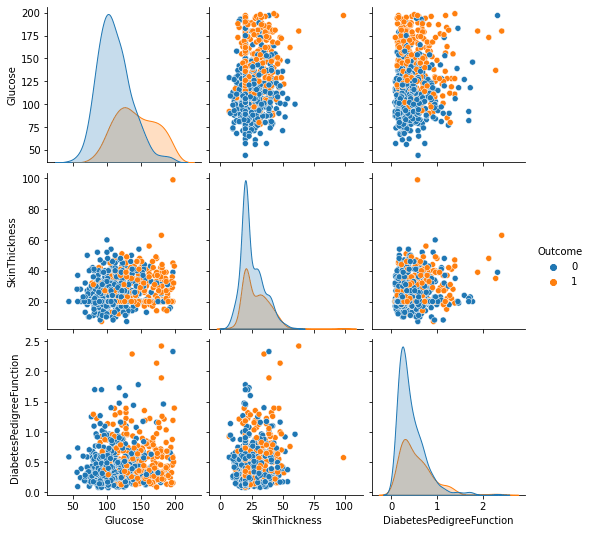 Studying the correlation between glucose and insulin using a Scatter Plot.

A scatter plot is a set of points plotted on horizontal and vertical axes. The scatter plot can be used to study the correlation between the two variables. One can also detect the extreme data points using a scatter plot. 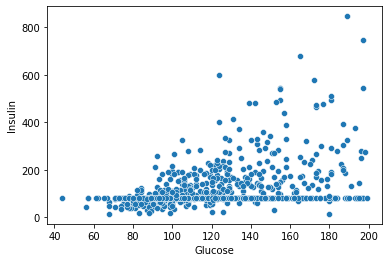 Let us explore the possibility of outliers using the Box Plot.

Boxplot is a way to visualize the five-number summary of the variable. Boxplot gives information about the outliers in the data. 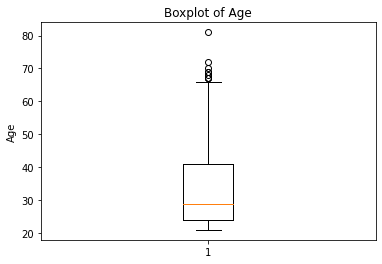 Let us now try to understand the number of women in different age groups given whether they have diabetes or not. We will utilize the Histogram for this.

A histogram is used to display the distribution and spread of the continuous variable. One axis represents the range of the variable and the other axis shows the frequency of the data points.

Understanding the number of women in different age groups with diabetes. 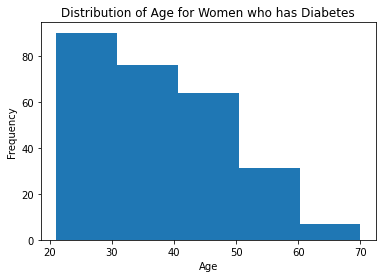 understanding the number of women in different age groups without diabetes. 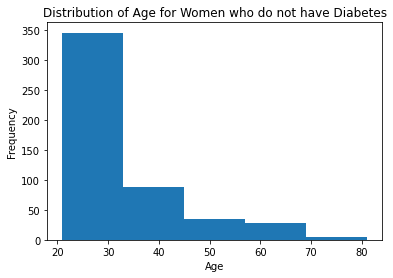 What is the Interquartile Range of all the variables?
The IQR or Inter Quartile Range is a statistical measure used to measure the variability in a given data.

It tells us inside what range the bulk of our data lies.

It can be calculated by taking the difference between the third quartile and the first quartile within a dataset.

Why? It is a methodology that is generally used to filter outliers in a dataset. Outliers are extreme values that lie far from the regular observations that can possibly be got generated because of variability in measurement or experimental error.

*And finally let us find and visualize the correlation between all variables.
*
Correlation is a statistic that measures the degree to which two variables move with each other.

Now let us visualize using a Heatmap.
Heatmap is a two-dimensional graphical representation of data where the individual values that are contained in a matrix are represented as colors. Each square in the heatmap shows the correlation between variables on each axis.

Migrating to the Cloud: Best practices and pitfalls to avoid

Some tips for creating a resume for a data analytics position!

Once suspended, evedevtech will not be able to comment or publish posts until their suspension is removed.

Once unsuspended, evedevtech will be able to comment and publish posts again.

Once unpublished, all posts by evedevtech will become hidden and only accessible to themselves.

If evedevtech is not suspended, they can still re-publish their posts from their dashboard.

Once unpublished, this post will become invisible to the public and only accessible to Evelyn.

Thanks for keeping DEV Community 👩‍💻👨‍💻 safe. Here is what you can do to flag evedevtech:

Unflagging evedevtech will restore default visibility to their posts.