You don’t need to progress very far into iOS development before you need to deal with tables. This means: UITableView, and probably your own custom UITableViewCells. A common pattern is to have editable controls in those cells, so that the user can change data from the table itself. Now you’re faced with a problem:

How do you transfer that data back to your UIViewController so the app can use it?

You know how to do this with standard controls, like UITextFields, UIButtons, etc. But you have a UITableView with a bunch of UITableViewCells. They don’t really behave the same way:

But tear all this away, and your UITableViewCells are not special snowflakes, they are UIViews just like any other. You should treat them exactly that way. Then the answer becomes simple: you do the same thing that Apple does in their UIViews when their controls need to send state back. Use delegates. Here’s how. 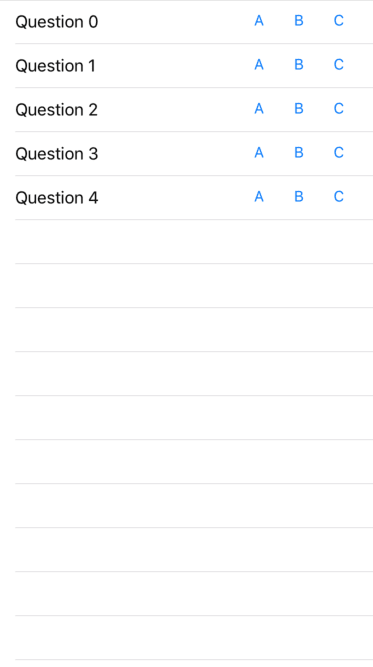 To set the stage, let’s say you’re writing a multiple choice testing app, where you have a UITableView containing UITableViewCells, each containing 3 buttons to indicate the answers a user could tap. You need to receive that information in order to be able to determine whether the answers are right once the user is complete.

First, define your delegate protocol. How you define it is a matter of personal preference. In this case, we probably don’t need the delegate to understand how the UI for the AnswerCellView is structured, so let’s just send indexes:

Now add your delegate to your custom UITableViewCell class:

Make sure you define your delegate variable as weak. Often, the delegate that gets passed in is owned by an outer UIView or the UIViewController. If you don’t define the delegate as weak in the UITableViewCell, you could cause a retain cycle and a memory leak.

Next, you will need to translate the button taps into calls through the delegate to communicate the state changes (in the case of UIButons, you would have registered these methods using UIButton.addTarget when you built the AnswerViewCell, or hooked them up to outlets if your cell UI is in a XIB):

In this example, we’ll have the UITableView serve as the delegate and collect the information from the individual AnswerViewCells:

You could also have your main UIViewController or a view model object implement the delegate, depending on your app’s architecture.

Did you like this tip? The next tip on the advantages of building a clone app to getting hired as an iOS developer is already waiting for you. Or sign up to get every tip straight to your inbox.

Evan Deaubl
A 20-year software generalist who has worked on everything from mobile apps to webapps to backend to embedded.
Adding manual app badges to your app: step by step
#ios #uikit #notifications
Making your circular views circular in Interface Builder
#ios #interfacebuilder #xcode #uikit
You can go home again — Using unwind segues to navigate back to previous screens
#ios #uikit #storyboards #interfacebuilder

Once suspended, evandeaubl will not be able to comment or publish posts until their suspension is removed.

Once unsuspended, evandeaubl will be able to comment and publish posts again.

Once unpublished, all posts by evandeaubl will become hidden and only accessible to themselves.

If evandeaubl is not suspended, they can still re-publish their posts from their dashboard.

Once unpublished, this post will become invisible to the public and only accessible to Evan Deaubl.

Thanks for keeping DEV Community safe. Here is what you can do to flag evandeaubl:

Unflagging evandeaubl will restore default visibility to their posts.