Once you’ve implemented this relationship a few times, the strategy becomes rather intuitive. However, I remember this concept being one of the hardest ones for me and my classmates to finally understand when it was introduced in second year of undergrad. Hopefully, this article will help you internalize the many-to-many relationship like I eventually did.

What is the Many-to-Many Relationship?

In each of these examples, note that there is a sense of one entity belonging to another.

Modeling One-to-Many in the Database

One-to-many relationships are easy to model in the database. For example, consider the country-city example. The country India has many cities such as Mumbai, Hyderabad, and Kolkata, but Kolkata only belongs to the country of India.

So, in the database, we probably have a Country table that looks like this:

And the City table plus relationship to the Country table would look like this: 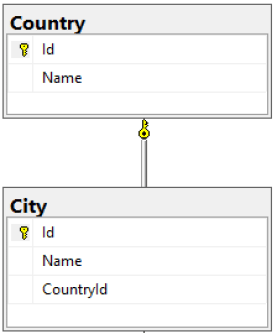 This is simple enough, and we can query for all cities in a country by simply writing something like SELECT City.Name FROM City JOIN Country ON Country.Id = City.CountryId WHERE Country.Name = 'India' and we’d get a result set including Mumbai, Hyderabad, Kolkata, and more.

But this kind of modeling is easy and we’ve only used it as an example to better understand our next section: modeling the many-to-many relationship.

Modeling Many-to-Many in the Database

Note: The associative table are also sometimes called association, bridge, intermediary, join, junction, crosswalk, or linking table (and there’s probably many more names for it). I learned the term “associative” table in undergrad, and I think that’s its official name in relational theory, so that’s what we’ll stick with in this article.

Let’s make this more concrete by creating an associative table for the Person and Language relationship. It’s common practice to name association tables as an amalgamation of the tables they join, so we’ll call our associative table PersonLanguage. I’d create such a table with the following SQL:

Notice that we specified two foreign keys on this table, PersonId and LanguageId, pointing to the Person and Language tables respectively. The table structure now looks like this: 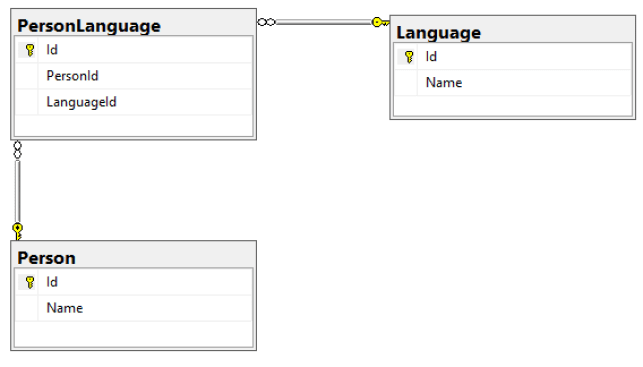 Likewise, if we want a list of all the people that speak English, we could run a query like this:

This would give us the following results:

The above examples show the most basic implementation of building associative tables to break up many-to-many relationships. The example PersonLanguage associative table above only has two columns (besides its own ID column) for pointing to Person and Language records.

We can actually add columns to this table as well and capture interesting information. For example, what if we wanted to record which language was a person’s mother tongue? In other words, if Erik grew up speaking English and learned Spanish later, but Lina grew up speaking Arabic and learned English later, how would we capture that?

Thanks to the associative table, the answer is pretty easy. We just have to add a column to PersonLanguage that indicates if the Language record captured is the Person record’s primary language. In T-SQL, I’d run the following ALTER statement:

and set the PrimaryLanguage value to 1 for languages the person learned from birth. By capturing this data on the associative table, we can now write a query to generate a report of every person and their mother tongue like so:

That is just one example of how to extend the functionality of our database with associative tables.

In this brief article, we learned how to break up many-to-many relationships in relational databases. The general approach is to place an associative table between the two tables and have a one-to-many relationship with them. Then we saw how we can use associative tables to capture nuanced data and create interesting reports. This is an important concept to understand in any kind of software or data engineering work that uses relational databases. As always, I hope this was helpful to you and don’t be afraid to contact me with any questions you might have!

How we compress data in large projects

Once suspended, erikwhiting88 will not be able to comment or publish posts until their suspension is removed.

Once unsuspended, erikwhiting88 will be able to comment and publish posts again.

Once unpublished, all posts by erikwhiting88 will become hidden and only accessible to themselves.

If erikwhiting88 is not suspended, they can still re-publish their posts from their dashboard.

Once unpublished, this post will become invisible to the public and only accessible to Erik.

Thanks for keeping DEV Community 👩‍💻👨‍💻 safe. Here is what you can do to flag erikwhiting88:

Unflagging erikwhiting88 will restore default visibility to their posts.