The first time I used ASGI(Asynchronous Server Gateway Interface) was through Channels 1.0 when ASGI spec was still a draft. It was my first interview project which helped me get my current job. It felt magical at that time how easy it is to add WebSocket functionality to my Django app and handles authentication and other Django related things for me seamlessly.

ASGI specification is now at version 3 at the time of writing and both ASGI and Channels became part of Django Software Foundation. Compared to the draft version, it has matured a lot with added lifecycle calls and better application format, etc. Most excitingly, a healthy and fast-growing community is forming and we are seeing more and more ASGI servers running in production environments. At my company, we are serving a few million requests per day through ASGI running on Daphne, Netflix's Dispatch is based on FastAPI, a popular ASGI web application framework, and apparently, Microsoft is using it too.

I would humbly advise anyone building web services in Python to learn about ASGI. And the best way to learn something is to built things with it, so in this blog post, I'll walk through the steps to build a micro web application framework that speaks ASGI. I hope it can help explain how ASGI works.

Before writing the first line of code, we need to have a basic understanding of what ASGI is and what we are building towards.

Here's a simple diagram showing how ASGI works at a high level. 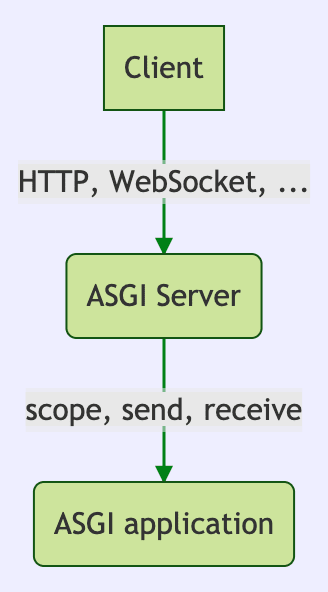 To put it in simple words, A browser(client), establishes a connection to ASGI server with a certain type of request (HTTP or WebSocket), the ASGI server then calls ASGI application with information about the connection, encapsulated in a python dictionary called scope, and two callbacks, named send and receive, that the application can use to send and receive messages between server and client.

You might notice that scope is not too different from a WSGI environ. In fact, ASGI interface is very similar to WSGI interface, but instead of getting a environ and start_response to send headers and using the return value of WSGI application as the response body, ASGI interfaces with the connection and allows us to receive and send messages multiple times during the lifecycle of the connection asynchronously until the connection is closed. This allows a nice interface for both WebSocket and HTTP.

It's also totally possible to wrap a WSGI application inside an ASGI application, just prepare a WSGI environ and start_response based on scope, receive, and send then call the WSGI application and it would work. If you delegate that call into a thread pool or something similar, you just made your WSGI application asynchronous. This is roughly how Channels wraps around Django.

When I say ASGI framework I refer it as a framework that makes building ASGI application easier and this does not include the ASGI server part. I'm mentioning this because some of the earlier Python asynchronous web frameworks have their own server implementation that also takes over tasks such as parsing HTTP requests, handles network connections, etc. We are not doing those in ASGI web framework. As a spiritual successor to WSGI, where web servers, such as Gunicorn and uwsgi, and web frameworks, such as Flask and Django, are separated, ASGI has this separation too.

A simple ASGI hello world application can be written as:

http.response.start starts an HTTP response sending status code and response headers. In this example, it responds with the 200 OK status code and has content-type set to text/plain in the headers. http.response.body sends the response body, the more_body key tells the server if the response is finished. ASGI server might use this to know if a connection should be closed or automatically decide between a content-length header or a chunked encoding.

We can run the application with uvicorn:

Although this approach works with a simple hello world example, it's not exactly convenient to write a more complex application this way. For one, it doesn't do routing, if you want to respond differently for different paths, you'll probably end up with a huge if ... else if ... else clause. Secondly, having to write the ASGI message every time in the form of a python dict is quite arduous. Third, in a complex application, it gets harder to track the status of the connection, such as is the response started, is the response ended, should I start the response here, etc.

With the new framework, I hope to be able to write an ASGI application like this:

I hope this snippet of how I want the framework to look like is self-explanatory. But here are some of the key things I want to achieve:

The Connection class will represent an ASGI HTTP or WebSocket connection. It's a class that encapsulates the three basic elements in ASGI, namely scope, send and receive, and expose some convenient methods and properties so that users don't need to verbosely write out all the ASGI messages and parse everything, such as cookies and headers, from scope. But it should allow users to access the original scope, send and receive when they want to, so that the composability of ASGI applications is maintained. For example, it should allow user to delegate certain connections to another ASGI application by calling another_asgi_app(connection.scope, connectionn.asgi_send, connection.asgi_receive).

Here's a simple implementation of the Connection class.

I hope this code is easy to read. All it does is providing us with an interface that makes it easier to access info about the request, read request body, make sure body length is not larger than declared, and send the response back to the client. It also provides some safeguards to ensure messages of the right type is sent in the right state. For example, it ensures that http.response.start messages are always sent before http.response.body, and no more messages are sent after connection closed. Most of the heavy lifting in parsing header, cookie, and query is done by werkzeug and other Python built-in superheroes.

Let's make a simple ASGI application with the Connection class:

We can run this example by executing uvicorn example_1:app. Requesting /?name=foo should correctly return Hello, foo.

We now have an ASGI application that's shorter in code and does more (accessing HTTP query). That's one step closer to what we want!

It's usually not required to have fine control over when to send what in an HTTP request-response cycle, returning a response that knows how to set headers and send the body is more convenient and familiar. To do that, we can write a simple HttpResponse helper class.

A JsonResponse is also added while we are at it.

There's not much going on in the HttpResponse class. All it does is providing a familiar interface allowing us to pass in a response body, optional headers, optional status code, and calls the underneath methods in Connection class for us. In the example of JsonResponse class, it also sets the content-type header.

Let's write another ASGI application to test it:

This application should return all query parameters in the form of a JSON object when visited.

Great, the application is even shorter!

You might have noticed that this is not exactly how it's used in the Goal section, where we can just return the response object instead of await on it. This is because this example is a plain ASGI application and the one in the original Goal section is in the context of a Router, who calls the await for us. The connection argument is allowed to be None in the constructor for the same reason.

Router dispatches requests based on requested url and HTTP method to different handlers. Most router implementations also parses parameters in urls. For example, if we define a router

and then tell the router to match the URL /a/foo/bar, it should give us the handler function as well as the parameters param_a and params_b.

This is indeed not easy but luckily, werkzeug comes with a routing module with does exactly this and even more, such as automatically redirect in the case of missing trailing slash. With its help, we can implement our routing module in around 60 lines of code.

Use this simple app to test it:

The application gets longer, but hopefully, it's clear that with more routes to handle a router makes it a lot easier to handle.

It also includes a default 404 response.

With the help of this new function, the previous example can be rewritten as:

In fact, the example defined in the goal section should also work now. Give it a try!

An infinite number of things can be added to this framework. On the top of my head, there are

I will write some of the things in the near future. And I wish this post could give readers enough information on where to start implementing them on their own.