In this post, you’ll learn how to implement Facebook login in your Capacitor apps, based on Ionic React framework. We will also retrieve user name and profile photo to show after login. And we’ll see how to auto-login users after first login.

Since this post is a mix of three new frameworks, it is possible you landed here by mistake. If you are looking for Facebook login in

As you can see from above, there are several options available for Hybrid app development these days, and it is easy to get confused between them. This post is focussed on Ionic framework with React as the front-end framework, and Capacitor as runtime and build environment.

You probably already know about Ionic, but I’m putting it here just for the sake of beginners. Ionic is a hybrid mobile app development SDK. It provides tools and services for developing hybrid mobile apps using Web technologies like CSS, HTML5, and Sass. Apps can be built with these Web technologies and then distributed through native app stores to be installed on devices by leveraging Cordova environment.

Cordova and Ionic Native plugins can be used in Capacitor environment. However, there are certain Cordova plugins which are known to be incompatible with Capacitor. For Facebook login functionality, we’ll use the Capacitor Facebook login plugin

Other than that, Capacitor also doesn’t support plugin installation with variables. Those changes have to be done manually in the native code. We will see it in this post.

Ionic Angular apps are supported by both Cordova and Capacitor build environments.

I know if can get confusing as three frameworks are crossing paths here. Bottom line for this post — Ionic + React + Capacitor + Capacitor Facebook Login plugin

I always go step-by-step for readers of all experience level. If you know certain steps, feel free to skip them

Step 2: Connect Capacitor with your app

Step 5: Build and Test your app on Android

The --type=react told the CLI to create a React app, not an Angular app !!

You won’t see much in the homepage created in the starter. Let’s modify this page to include a button, icon and a title for login. Also, I have created a Homepage, where the user is redirected after successful login. The user profile information in this page comes after login and single API call. 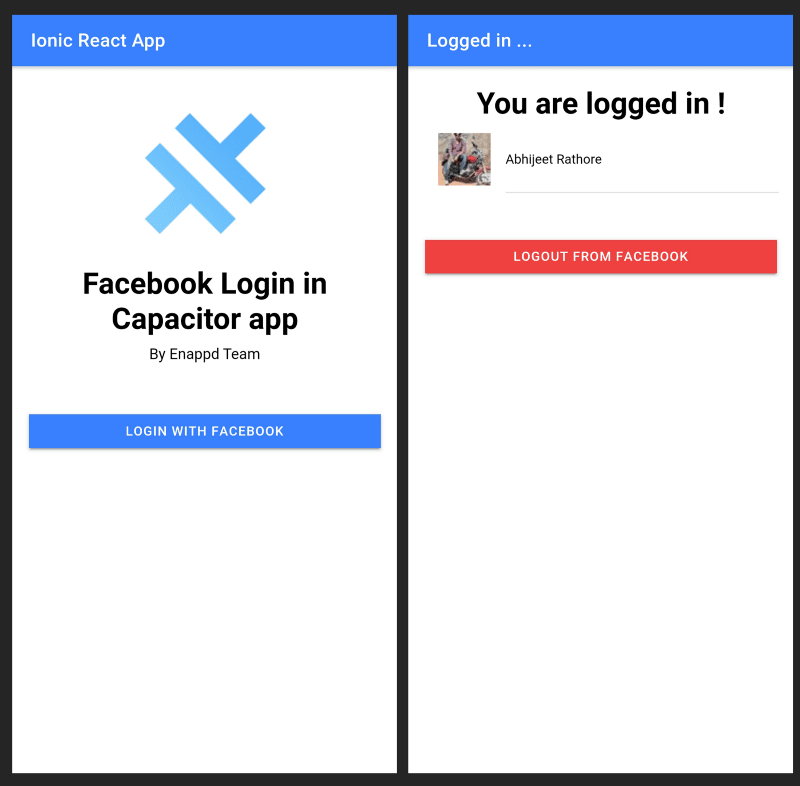 The code for this can be found in the attached Github repository.

It will ask you the app name and ID. Give app name whatever you want. App ID is the domain identifier of your app (ex: com.example.app). Note this ID as this will be required later when you create app in Facebook developer console.

Next, we need to create a new app in Facebook’s developer dashboard. This app is the one that Facebook will use to ask our users for permission, when we try to log them into our Ionic app.

​Go to Facebook developer console and create a new app.

Once you finish creating the app, go to Facebook app dashboard and pick App Id from there. It will be required for Facebook login in the Ionic app 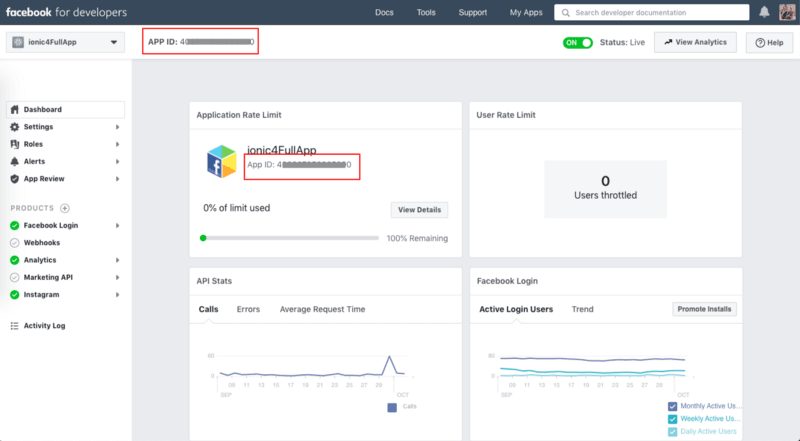 We need to let Facebook know which platforms we’ll be using (if it’s just web, iOS, or Android).

‌To add the platform, go ahead inside your Facebook dashboard and click on Settings, go to the bottom of the page and you’ll see a button that says Add Platform.

‌iOS :- You’ll see a form asking you for some information, right now we just need the Bundle ID. You bundle ID is same as the app ID you supplied to capacitor in Step 2.

‌Once you add the Bundle ID, just follow the process to create the app.

‌Android :- The difference is that instead of Bundle ID, Facebook calls it “Google Play Package Name” in case of Android.

Since Capacitor builds production builds, it signs your Android app with debug.keystore . When you try to login via Facebook, Facebook needs to know the Key Hash of your system to ensure it’s you who compiled the app. You can add more than one Key Hash as well.

If you don’t want to go through all this hassle, just continue reading the post. Once you build the app in android device and try to login via Facebook, it will show you an error saying

At this point, copy the hash-key from the error, and save it in Facebook developer console. 😎

To setup Facebook login in the app, we’ll do following things

After this, build your app using following commands

In Android studio, locate file android/app/src/main/java///MainActivity.java, and add the plugin to the initialization list:

In file android/app/src/main/AndroidManifest.xml, add the following XML elements under <manifest><application> :

And, in file android/app/src/main/res/values/strings.xml add the following lines :

We have to setup four major functions for Facebook functionality

The complete code for Login Page looks like this

asks for permission during login. This is the basic permission, but you can ask for more permissions.

Here, state field contains navigation params (props). These will be accessed in next page from the location object of props .

The complete code for Home Page looks like this

The routes are defined in App.tsx file like this

Once user is successfully logged in, we want to redirect to Home page. And when user logs out, we want to come back to Login page.

On Login page, history.push redirects user to next page after successful login

On Login page,history.goBack() takes you back to previous page after logout is successful.

Step 5 — Build and Test your app on Android

At this point, you have all the Facebook Login stuff built-in, Android app setup and Facebook app also setup. Build the app once again after all changes using

Build the app on Android device using Android studio. You should be able to login via Facebook, and reach the inner page where you see the user information. Following GIF shows the login flow in my OnePlus device

When you call the graph API to fetch user’s profile picture, the response looks like this

In this post you learnt how to implement Facebook login in your Ionic React Capacitor app. Social logins are very important part of your apps, as they make users trust your apps more. It is also easy to use, and users don’t have to remember any passwords. You can always link the Social logins with your server as well. Firebase has a ready-to-integrate solution for this.

Now that you have learned the implementation of Facebook Login in Ionic React Capacitor app, you can also try following blogs for other Ionic apps 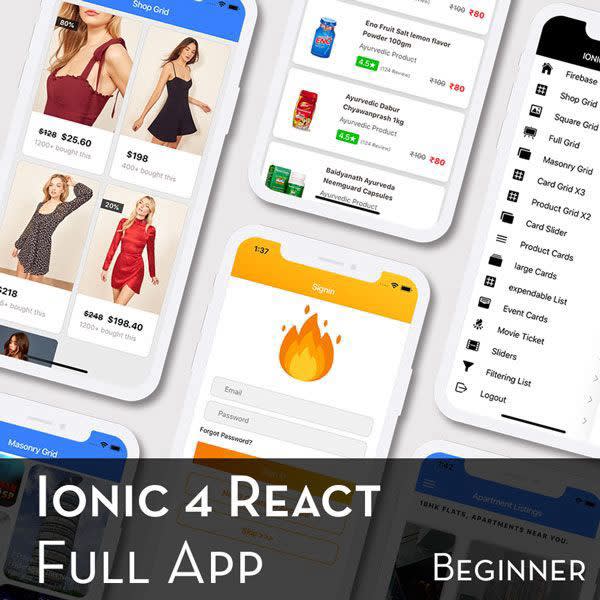 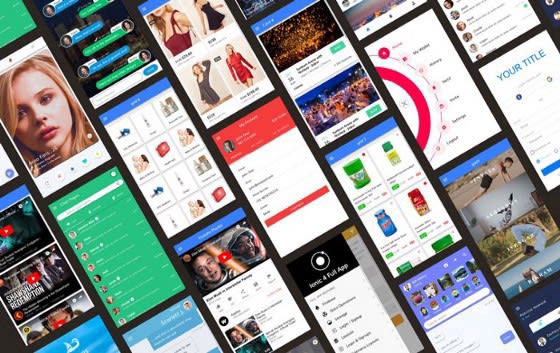 Most commonly used library with react