In these posts, you’ll learn how to add and play with different types of charts in Ionic 4 apps. We will explore several alternatives for Charting i.e. Chart.js, D3.js, Highcharts, GoogleCharts and others.

D3.js — D3.js (or just D3 for Data-Driven Documents) is a JavaScript library for producing dynamic, interactive data visualizations in web browsers. It makes use of the Scalable Vector Graphics (SVG), HTML5, and CSS standards (but it can also work via canvas too if need be). It is mainly used for real-time data visualizations or admin dashboards.

D3 creates amazingly detailed visualizations, both static and dynamic. One of the popular uses of D3.js is to visualization data over maps of different types 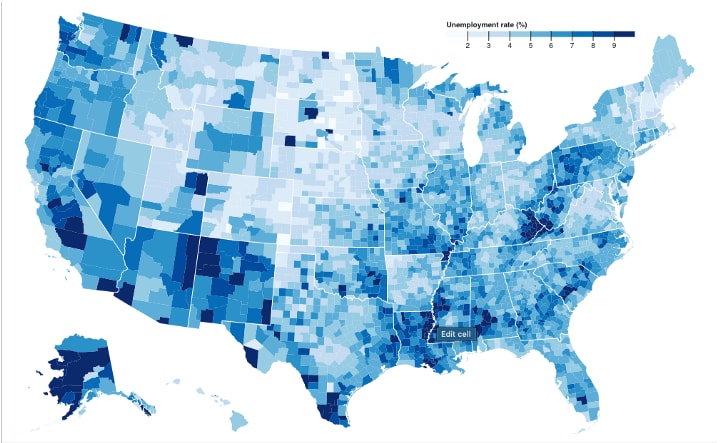 Here is another one — mapping Bible contradictions, available at http://bibviz.com

D3 can do magic if you know what you exactly want it to do. Check out more D3.js examples here

Some salient points for D3.js

If you are looking for simpler chart solutions, there are many other popular charting libraries like Chart.js, HighCharts, FusionCharts, Angular Google Charts and more. All of these are custom libraries to create charts in a simple manner.

You can create a sidemenu starter for the sake of this tutorial. On running ionic start ionic-4-d3js sidemenu , node modules will be installed. Once the installation is done, run your app on browser using

The app will launch on browser. You can go to Inspect → Device Mode to see the code in a mobile layout. Next we’ll add the D3js library to our app.

To create charts/visualizations you need to add D3.js library to the app. Add the library from npm package

That’s it ! You are ready to use D3.js in your app and PWA pages.

D3.js uses HTML5 / CSS and SVGs to create charts and visualizations in HTML5. We will add a simple 1 div in the HTML page of our app’s page, and access that div in the page.ts file to include our SVG based chart

Next we’ll import D3 and relevant modules in bar.page.ts page. Here we’ll also access the barChart div and create svg, axes inside it, and finally plot data inside it using D3 methods. Complete code to create a bar chart would be

You probably already realize that D3 is way more difficult for easier charts, compared to other libraries like Chart.js etc. There’s a lot happening in the code above, so let’s break it down

The module names are more or less self explanatory

2. There are four methods at work in this code

This is the first method called after page loads. It selects barChart element in the DOM and appends an svg element to it. After that, all the lines are related to adding attributes to the svg element, like height , width etc.

In the end, it also appends a <g> element in the svg . The <g> SVG element is a container used to group other SVG elements. Transformations applied to the <g> element are performed on its child elements, and its attributes are inherited by its children. It can also group multiple elements to be referenced later with the <use> element.

You can also check these element in the DOM using Chrome inspect tool. The svg and <g> elements are clearly visible here

In this function, we are initializing the axes of the chart. Notice how we have a scaleBand function for X axis, but scaleLinear for Y-axis. This is because we are creating a bar-chart (vertical), where the Y values will increase continuously, but X values are bundled for data. Also, the padding(0.1) is given in X-axis to create a gap between the bars.

This function draws the initialized axes on the chart.

Notice, we have added two <g> elements to the first <g> element which we added in init() function. Next steps are adding different HTML attributes to the <g> element. 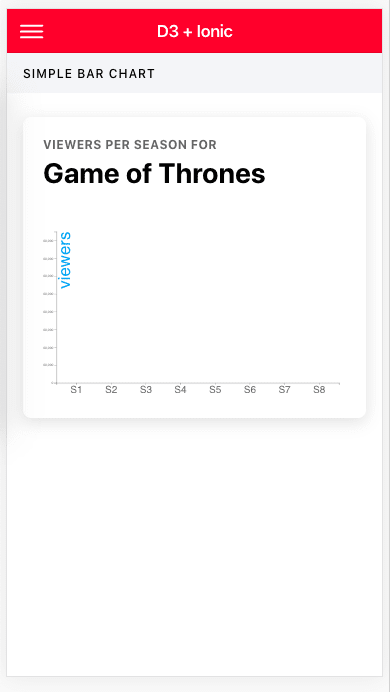 Finally, we draw the values on chart in this function.

We attach rect element to every data contained in this.barData and set attributes of the rect (width, height, fill etc). Notice, the values are drawn as per the definition of this.x and this.y as defined in initAxes()

Here, you can attach custom classes, give each bar a different color and much more. There is no end of customization in D3 😎

The Bar chart will look like this. Pretty cool, right ! 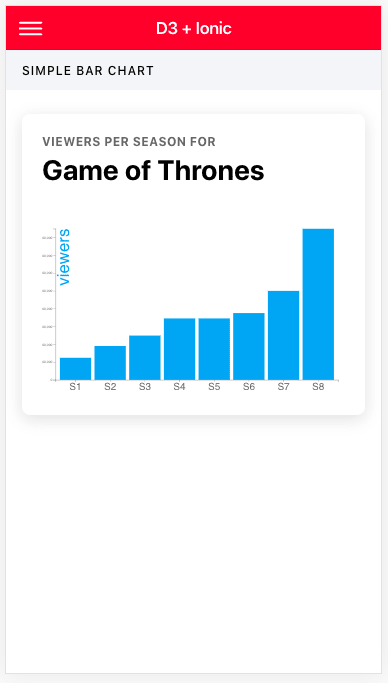 Pie chart creation is a little different from Bar Charts, because the linear domain is now changed to radial (angular?) domain. So instead of lengths we use arcs etc. Also, we’ll need to import different modules from D3.

Create a div element with id pieChar in your HTML. Then the complete TS code for a sample Pie chart will look like following

Notice that axes are replaced by labelArc . Broadly the creation process remain similar. I will leave it you to understand some of the things going on here. Trust me, it’s very easy to understand. 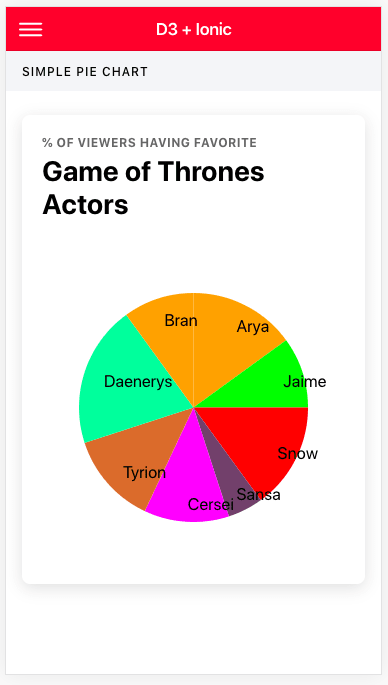 You’ll probably notice that D3 charts, as I have shown above, do not look as attractive as other libraries. That is not entirely true. D3 charts can be customized to any level, and they can look exactly as any other library’s charts (or better), but that will take effort on your side.

PWA users ! Here’s how to current charts will look in a full screen desktop browser (remember, you can always customize the height, width and appearance as per screen size) 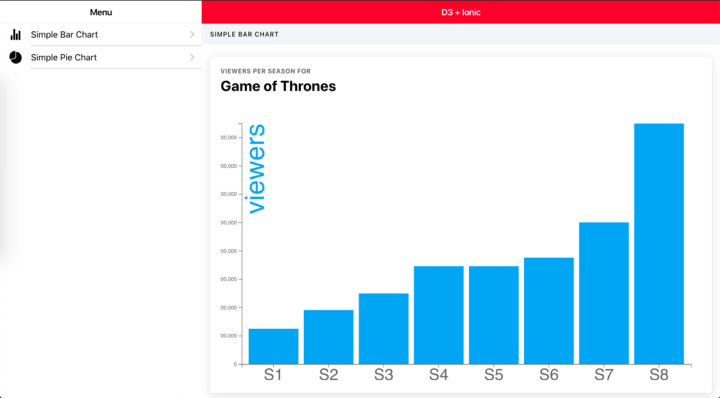 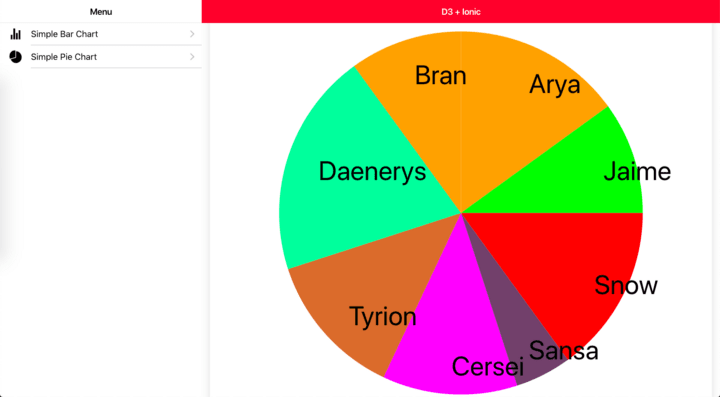 As I discussed above, D3 can create amazing visualizations using JS. Let’s try to create something cool, which other libraries cannot build. I’m going to pick an example from the endless list of examples available at https://github.com/d3/d3/wiki/Gallery

This example is taken from http://www.redotheweb.com/CodeFlower/. This experiment visualizes source repositories using an interactive tree. Each disc represents a file, with a radius proportional to the number of lines of code (loc). All rendering is done client-side, in JavaScript. Try hovering on nodes to see the loc number, clicking on directory nodes to fold them, dragging nodes to rearrange the layout, and changing project to see different tree structures. Built with d3.js. Inspired by Code Swarm and Gource.

Step 6— Test your app in Android and as PWA

We have already tested the above d3 charts in browser. If you have carried out the above steps correctly, Android build should be a breeze.

In next posts of this series, we’ll learn how to create charts in Ionic 4 using Highcharts, Angular Google charts and other libraries.

Checkout other posts in this series

Now that you have learned the implementation of D3.js for charting in Ionic 4, you can also try 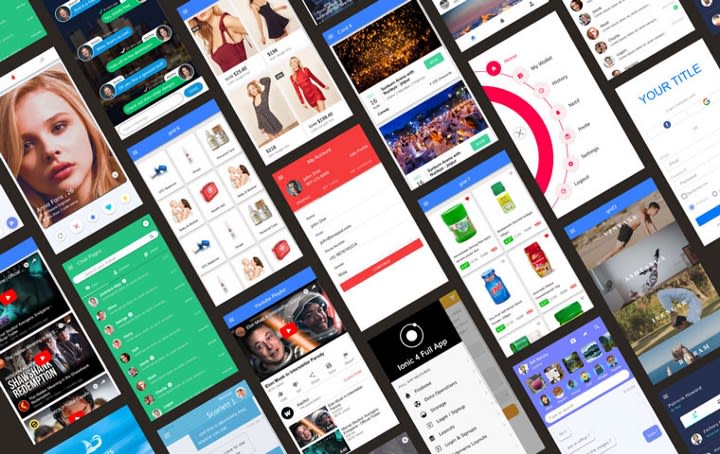