In the latest version 5.0, EMQX made a breakthrough by relaying MQTT message over QUIC protocol.

QUIC (RFC 9000) is the underlying transport protocol of the next-generation Internet protocol HTTP/3, which provides connectivity for the modern mobile Internet with less connection overhead and message latency compared to TCP/TLS protocols.

Based on the advantages of QUIC, which make it highly suitable for IoT messaging scenarios, EMQX 5.0 introduces QUIC support (MQTT over QUIC) and designs a unique messaging mechanism and management approach.

This article will explain MQTT over QUIC in detail to show the advantages and value of this leading technology implementation for IoT scenarios. Readers will be able to leverage EMQX 5.0's support for QUIC through this article, and make the IoT data transfer more efficient, stable, and low-cost in various MQTT application scenarios.

QUIC is a common transport layer network protocol built on top of UDP, originally proposed by Google as an alternative to TCP+TLS to improve end-to-end user experience.

QUIC has many advantages over existing TLS over TCP implementation:

QUIC runs over UDP not TCP. QUIC stream is separately flow controlled and lost data retransmitted at the level of QUIC, not UDP. This means that if an error occurs in one stream would not affect the other streams in the same connection. For the application over the QUIC layer, data processing will not be blocked due to some error in a single multiplexed stream thus improving the parallelization and overall performance.

Application over QUIC, runs closely to QUIC stack can do flow control on its own and also get involved for congestion control.

QUIC supports connection migrations on both server and client side, that makes connection can get kept alive even lower layer network is switched such like the client is moving from Wifi access network to cellular network (4G, 5G).

QUIC has become the underlying transport protocol for the next-generation Internet protocol, HTTP/3.

Introduction to the HTTP/3 protocol

In October 2018, the IETF's HTTP and QUIC Working Group jointly decided to name HTTP mapping over QUIC as HTTP/3 in order to accelerate its adoption as a global standard. On June 6, 2022, the IETF standardized HTTP/3 to RFC 9114.

The goal of HTTP/3 is to provide fast, reliable and secure Web connections on all types of devices by solving the transport-related problems of HTTP/2. HTTP/3 uses similar semantics to the HTTP/2 version, including the same request methods, status codes and message fields. The fundamental difference is that HTTP/2 uses TCP/TLS as the underlying protocol, whereas HTTP/3 uses QUIC.

According to W3Techs, at least 40% of Internet traffic is over QUIC, and 25% of the top 10 million websites already support the HTTP/3 protocol, including top-streaming sites such as Google, Youtube, Facebook, etc.

MQTT is a connection-based IoT communication protocol with a compact message structure that enables stable transmission over severely constrained hardware devices and low-bandwidth, high-latency networks. The keep alive mechanism, will message, QoS, and many other features can cope with various IoT scenarios.

For example, connected vehicle users usually face similar problems: vehicles may run in mountainous areas, mines, tunnels, etc., which can cause connection interruptions when entering signal dead zones or passively switching base stations(also referred to as spotty network). Frequent connection interruptions and slow connection establishment can lead to poor user experience. In some services with high requirements for real-time data transmission and stability, such as the L4 driverless vehicle, it costs a lot for customers to mitigate this problem.

In these scenarios, the low connection overhead and multi-path support of QUIC shows its strengths. After deeper exploration, we believe that MQTT over QUIC is a great solution to this dilemma - based on QUIC's 0 RTT/1 RTT reconnect/new capability and migration support, it can effectively improve user experience in weak networks and irregular network paths.

MQTT over QUIC Implementation of EMQX 5.0

The current implementation of EMQX replaces the transport layer with a QUIC Stream, where the client initiates the connection and creates a bi-directional Stream. EMQX and the client interact on it.

Considering the complex network environment, if for some reason the client fails to complete QUIC connection handshake, it is recommended that the client automatically fall back to a traditional TCP connection to ensure connectivity. 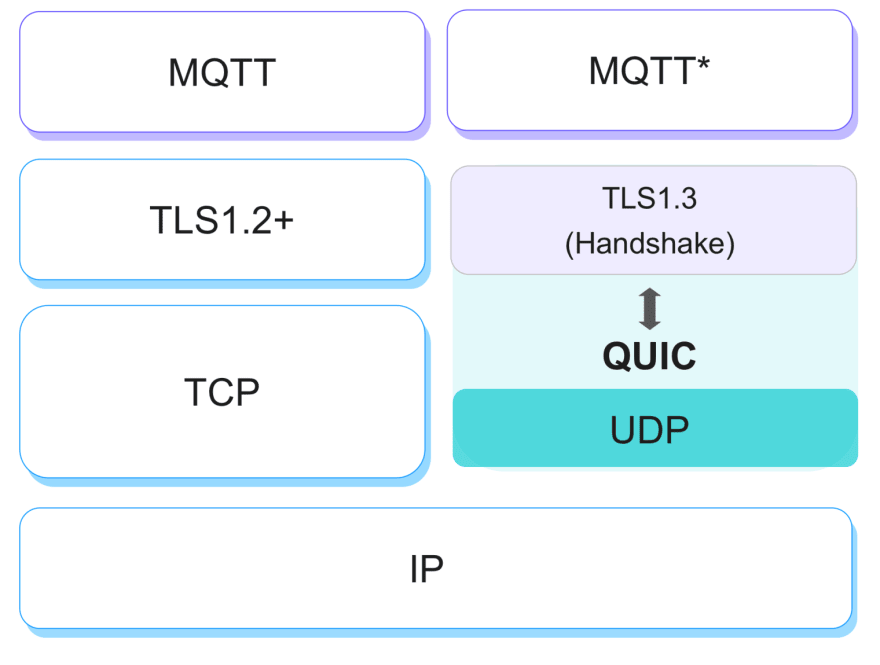 MQTT protocol can benefit from using QUIC as its transport as follows:

There are also more opportunities to be explored:

We simulated the performance of QUIC and TCP/TLS under different scenarios based on EMQX v5.0 in the lab environment.

This is to compare the handshake performance, MQTT connection setup establishment, and subscription completion at different network latencies(ping roundtrip).

With 1ms roundtrip time, QUIC and TLS do not show that many differences in latency performance.

We could conclude that MQTT over QUIC fits well in a network that has high latency. 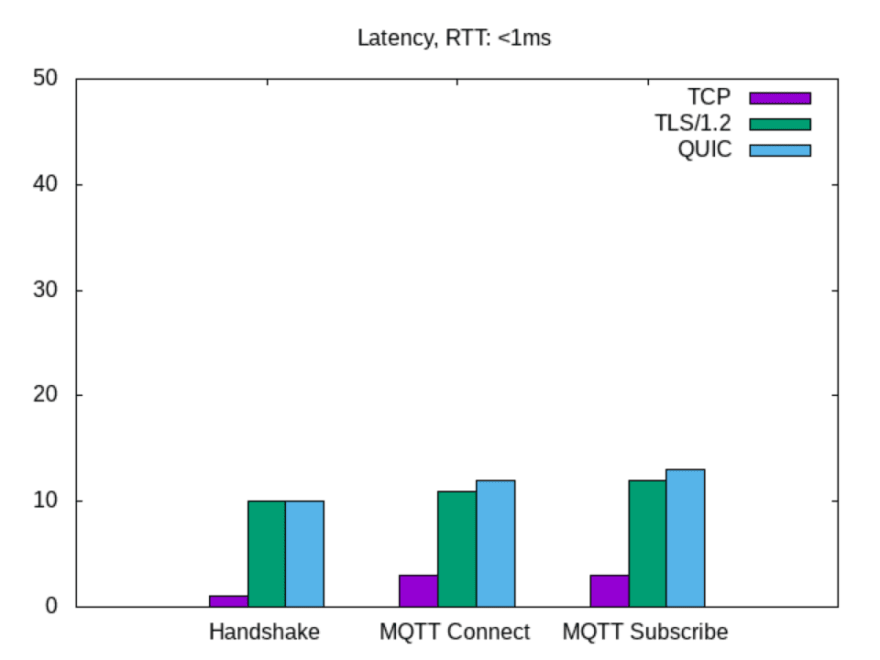 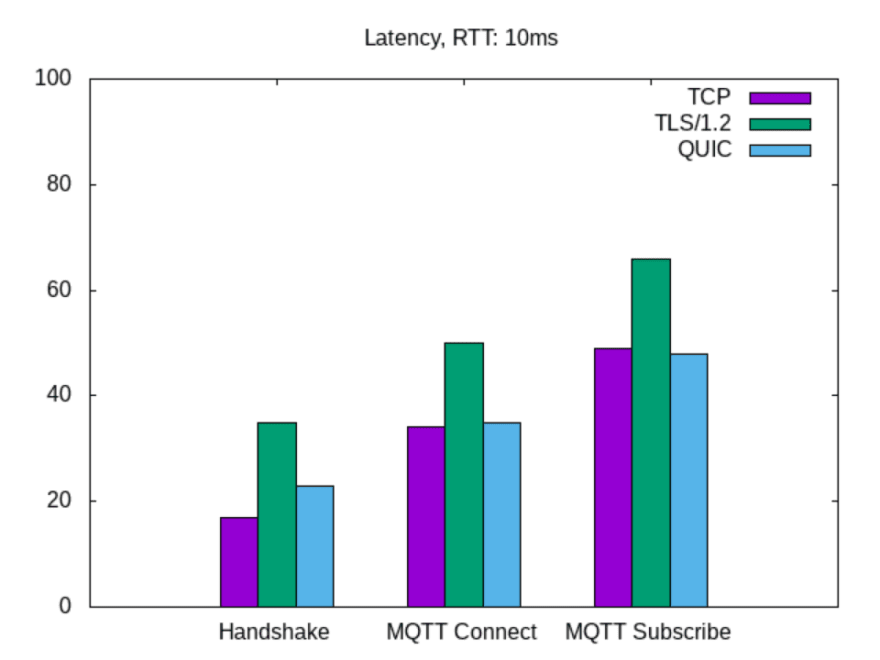 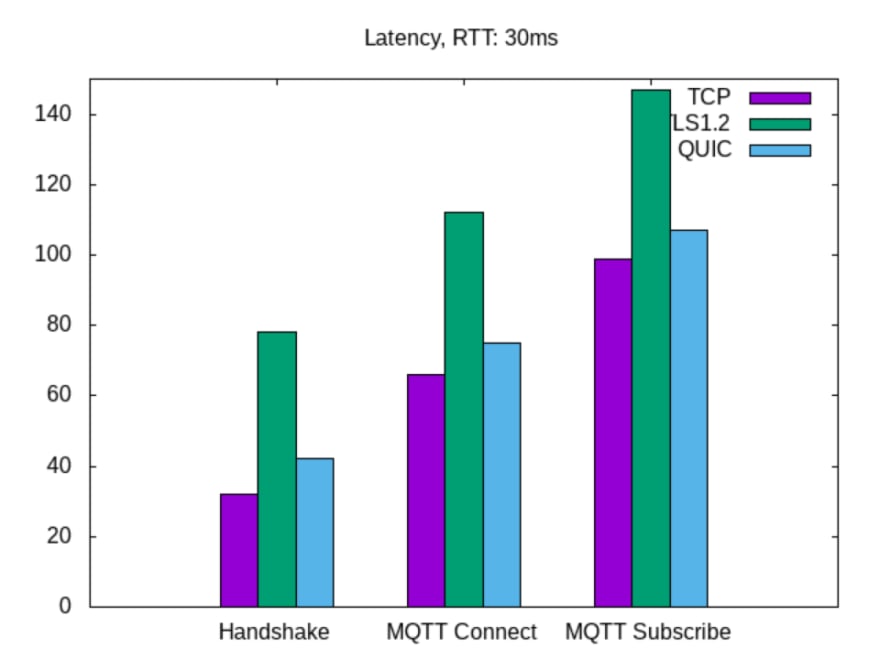 This is to test the latency required to reinitiate a connection and resume reconnection after a disconnection.

Application layer could exchange data much earlier while the TCP/TLS requires at least 2 roundtrips to finish the handshake and then start exchanging application data. 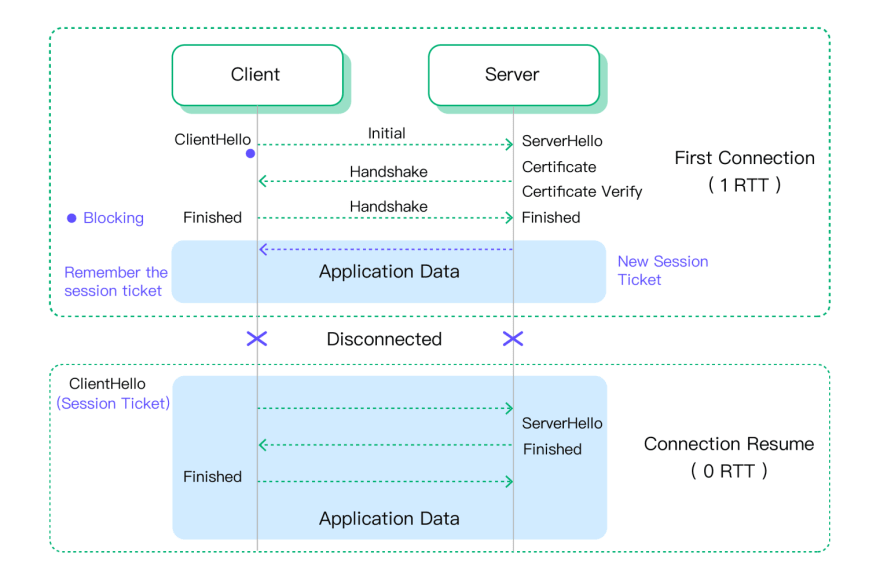 The benefit of 0 RTT is that it effectively reduces the handshake overhead and improves performance (handshake latency) for both the client and the server. EMQX sends NST packets to the client by default, with a validity of 2 hours.

However, since 0 RTT early data is not protected against replay attacks, QUIC recommends not carrying data on 0 RTT that would change the application state.

EMQX does not support early data by default, and this test is only used for comparison and verification.

The test results show that QUIC outperforms pure TCP after the first handshake if the MQTT layer protocol is properly designed. 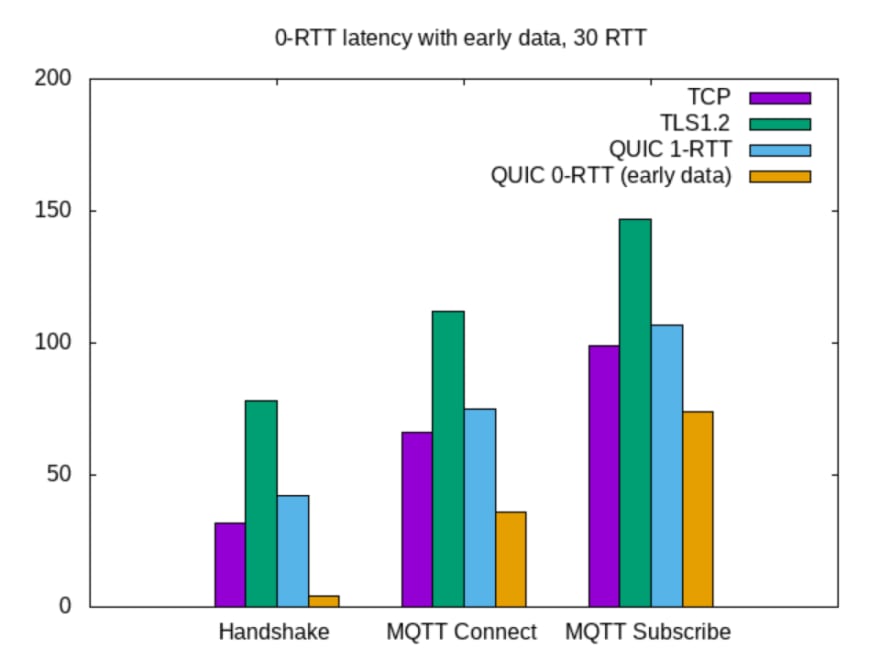 This test is for the resource usage comparisons in the scenario of massive client connect, disconnect and then reconnect. The results show that QUIC outperforms TLS in terms of CPU and memory usage, but reconnection consumes more bandwidth than TLS. Due to different implementations, here we compare the performance of two implementations (TCP/TLS and QUIC) in EMQX

Note 1: mainly refer to the additional overhead of MQTT clearing sessions and kicking off old connections 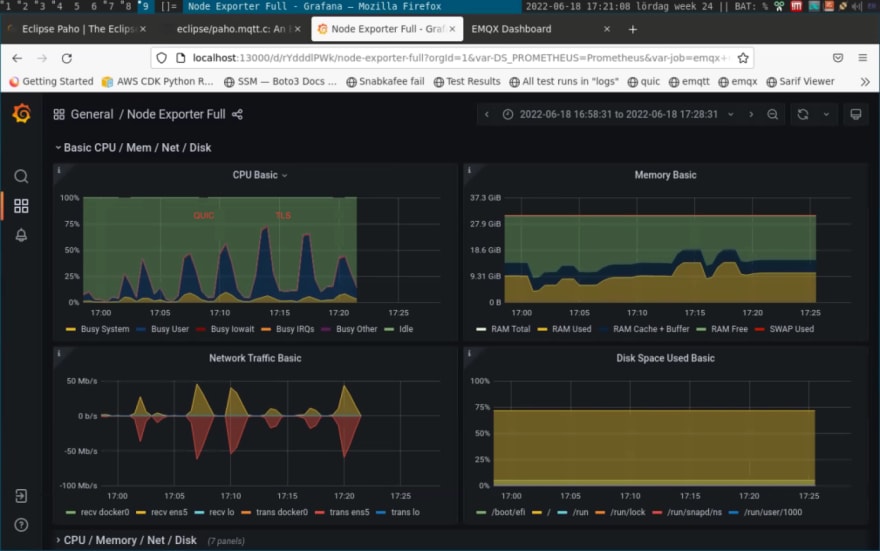 When the client source address (address and port) is changed, traditional TCP/TLS clients must detect a disconnect, failure of routing or packet loss at the application layer before reconnecting. This process is very slow due to various timers and involves many unnecessary retransmissions, loss recovery, etc. The application over TLS runs into the blocking state, before it starts to clean the state and reestablish the connection, the application data exchange is blocked.

This result shows that QUIC is well suited for environments where networks are frequently switched. 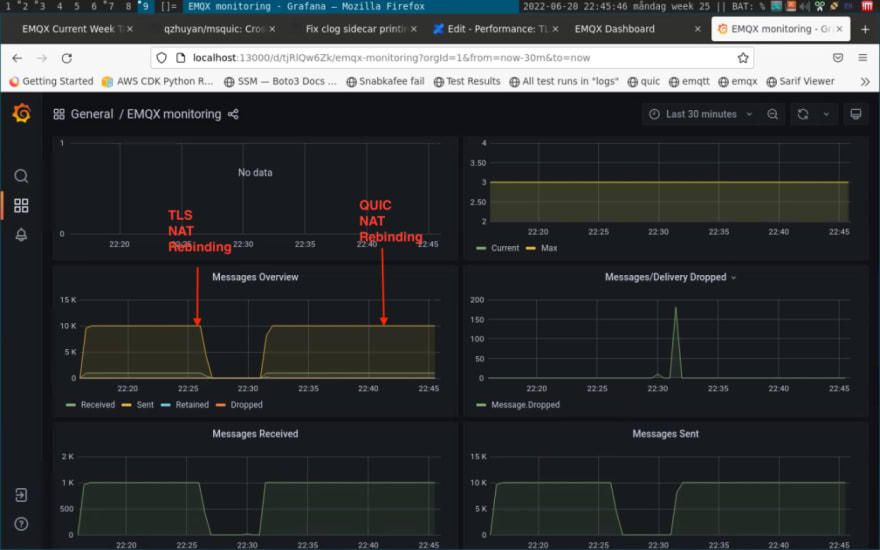 Test scenario: EMQX publishes QoS 1 messages at the rate of 20K/s and network errors are injected during the process: 20% out of order (inconsistent order of packets at the sender and receiver side), 10% packet loss. Additional network switching interferences are added every 30 seconds in the QUIC test.

In this case, the data received by the QUIC server is slightly jittery, but no messages are lost; while TLS shows congestion and packet loss due to a poor network environment. This result shows that QUIC can provide reliable transmission in a weak spotty network environment. 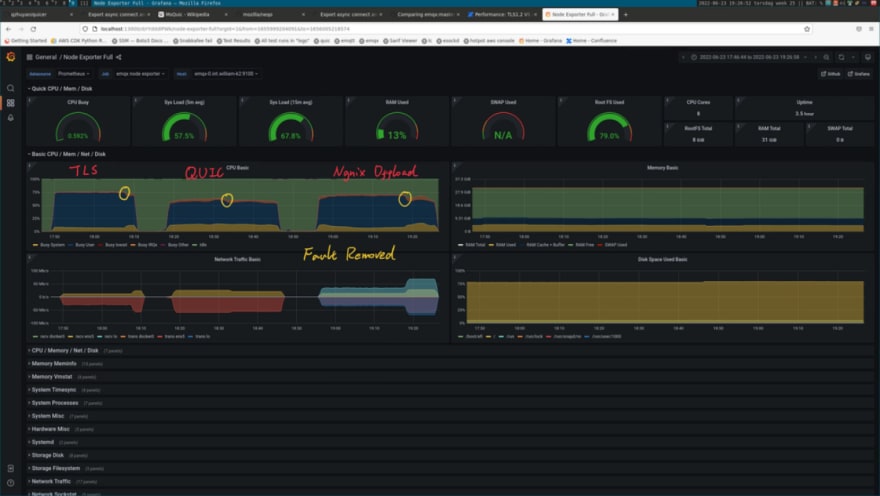 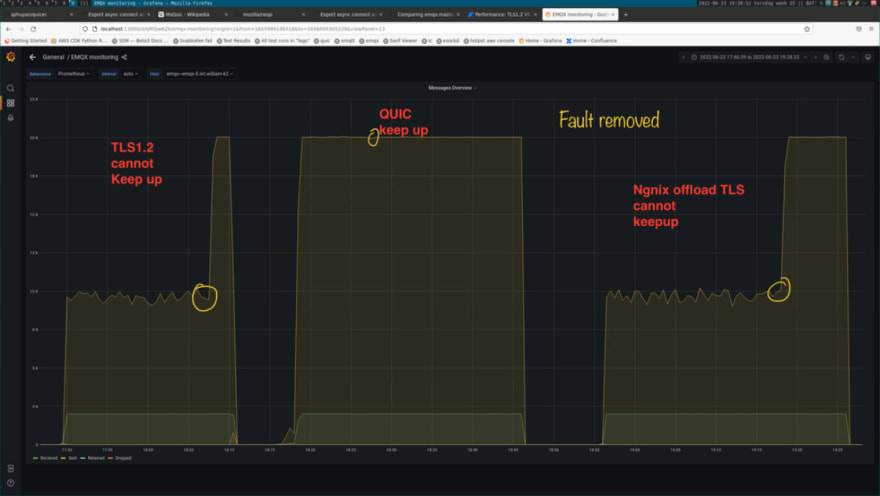 When we removed the network error, we can see in the yellow circle that TLS sending and receiving is back to normal, the number of packets is consistent without stacking, while the QUIC has only gone from slightly jittery to smoother.

Easier to Use: MQTT over QUIC SDK

NanoSDK 0.6.0 has released the first C language MQTT over QUIC SDK based on the MsQuic project.

NanoSDK provides a better IoT connectivity experience by adding QUIC support to the transport layer of NNG, enabling protocols such as MQTT and nanomsg to move from TCP to UDP. It internally binds QUIC Stream to MQTT connection mapping and has a built-in function of 0 RTT fast handshake reconnection.

We will also release SDKs for Python, Go, and other languages based on the NanoSDK in the near future, so that more users can experience the advantages of MQTT over QUIC as soon as possible.

At the same time, the relevant SDK will support QUIC to TCP fallback. When QUIC is not available, the connection layer will automatically switch to TCP/TLS 1.2, ensuring that services can operate normally in all types of network environments.

Combining QUIC features with IoT scenarios, we have planned many features for MQTT over QUIC, such as topic prioritization by differentiating control channels, non-reliable real-time streaming for high-frequency data transfer scenarios, and flexible topic and data channel (Stream) mapping to reduce interference between topics. These will may be presented in future releases depending on the feedback from the community and our customers.

EMQ is also actively promoting the standardization of MQTT over QUIC. We are preparing a draft proposal about MQTT over QUIC after becoming the only Chinese company with voting rights in the OASIS MQTT Technical Committee in 2018 and participating in the 5.0 protocol standard development. We believed that in the near future, the underlying protocol of MQTT will support both TCP and QUIC, benefiting the entire IoT industry.

It’s quite obvious that QUIC is very suitable for the weak, lossy, spotty IoT network environment where the UDP MTU size of the traditional TCP/IP network can be guaranteed or the environment where the network is frequently switched. QUIC has great potential for IoT scenarios where the devices are constantly on the move (such as the Internet of vehicles, mobile collection, etc.), or the device wants to keep long living MQTT session while has to sleep periodically.

MQTT over QUIC of EMQX 5.0 is the first implementation around the world, making EMQ once again lead the global trend of MQTT brokers. EMQ will continue the technological innovations to drive the continuous iterative upgrade of products and provide a reliable infrastructure for the IoT field to power business innovation.

A huge collection of UI resources

EMQ Technologies
How to Use the MQTT Plug-in in JMeter
#testing #mqtt #opensource #tutorial
How to Use MQTT in Dart
#dart #mqtt #tutorial #opensource
What is The MQTT and Why is it the Best Protocol for IoT?
#mqtt #beginners #programming #tutorial