In the previous article of this series, we introduced the open-source test tool JMeter and took a simple HTTP test as an example to see the capabilities of JMeter. In this article, we will further introduce JMeter's rich components to help you build test scripts for complex scenarios.

JMeter's test script is presented in the form of 「tree」 in the interface, and the saved test script jmx file itself is also in xml format. The JMeter script tree takes the test plan as the root node, and all test components will be included in the test plan. In the test plan, you can configure user-defined variables called by components in the whole test plan, as well as thread group behavior, library files used in test, etc.

By using various test components in the test plan, you can build rich test scenarios. The test components in JMeter generally have the following categories: thread group, sampler, logic controller, listener, config element, assertion, timer, pre-processor and post-processor. Next, we will introduce them separately and describe the main components in detail.

The Thread Group is the beginning point for all test plans. All samplers and controllers must be placed under a thread group. A thread group can be regarded as a virtual user pool, in which each thread can be understood as a virtual user, and multiple virtual users perform the same batch of tasks at the same time. Each thread is independent and does not affect the others. During the execution of one thread, the variable of the current thread will not affect the variable value of other threads.

The interface of thread group is shown in the following figure: 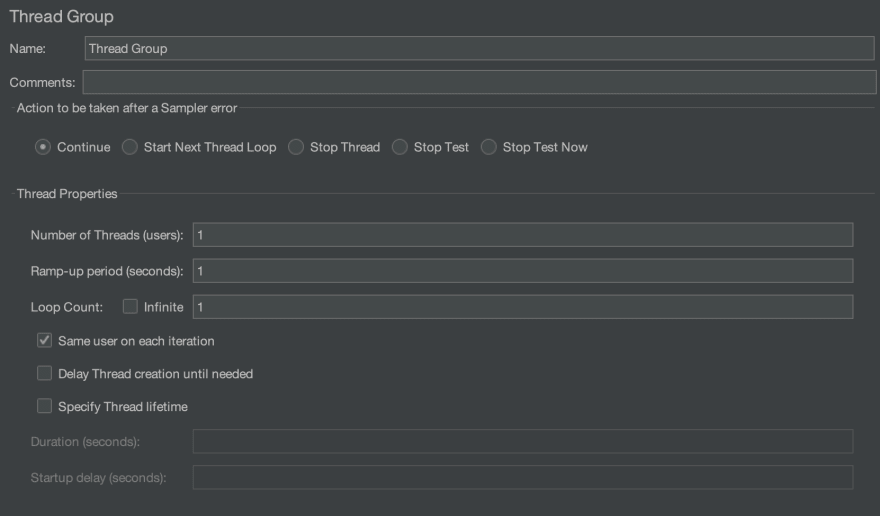 In the interface, the thread group can be configured as below:

The following configuration items control whether the test will continue to be executed or not when an error is encountered.

The number of threads is the number of concurrent users, and each thread will run the test plan completely independently without interfering with each other. Multiple threads are used in the test to simulate concurrent access to the server.

If the ramp-up value is set small and the number of threads is set large, it will put a lot of stress on the server at the beginning of the test.

(1) Duration: control the duration of the test, with the unit of second.

(2) Startup delay: Control how long after the test be delayed before startup, with the unit of second.

The sampler is used to simulate user operations, and is a running unit that sends requests to the server and receives response data from the server. A sampler is a component inside a thread group, so it must be added to the thread group. JMeter natively supports a variety of samplers, such as TCP sampler, HTTP request, FTP request, JDBC request, Java request, etc. Each type of sampler sends different requests to the server according to the set parameters.

The TCP Sampler connects to the specified server through TCP/IP, sends a message to the server after the connection is successful, and then waits for the server to reply.

The interface is as follows: 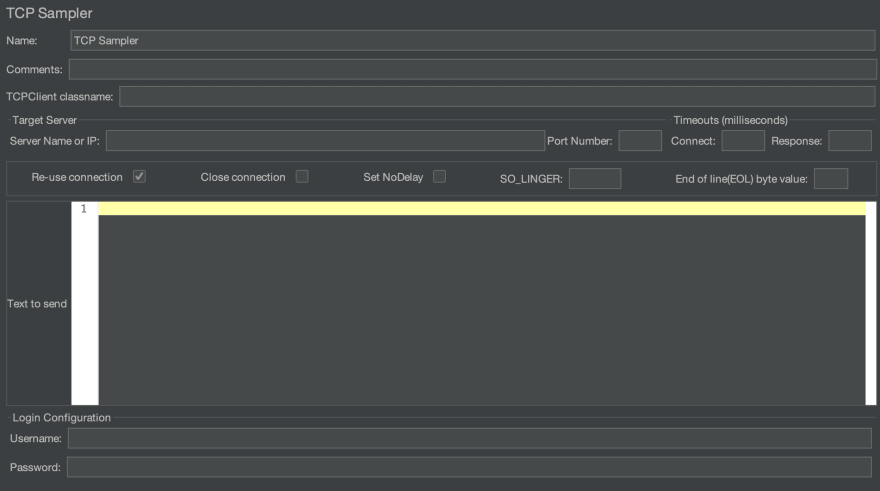 The properties that can be set in the TCP sampler are as follows:

You can also provide custom implementation classes by extending org.apache.jmeter.protocol.tcp.sampler.TCPClient.

「Server Name or IP」 and 「Port Number」 specify the hostname/IP address and port number of the server application.

Payload to be sent

Set the username and password used for the connection

The HTTP sampler sends HTTP/HTTPS requests to the web server.

​ The protocol used to send the request to the target server, which can be HTTP, HTTPS or FILE. The default is HTTP.

​ The hostname or IP address of the target server to which the request is sent.

​ The port number that the web service is listening. The default port is 80 for HTTP, and is 443 for HTTPS.

​ The method of sending the request, commonly including GET, POST, DELETE, PUT, TRACE, HEAD, OPTIONS, etc.

​ Applicable to several request methods of POST, PUT, PATCH and FILE, which controls the way of encoding the request content

​ If you want to pass parameters in JSON format, you need to configure the Content-Type as application/json in the request header

​ Send the file in the request. The HTTP file upload behavior can be simulated in this way usually.

Logic controllers in JMeter are mainly divided into two categories:

Sometimes, we want to count the overall response time of a group of related requests. In this case, we need to use the transaction controller.

Add a transaction controller as shown below:

The configuration items of the transaction controller are as follows:

For example, the unchecked summary report is as follows: 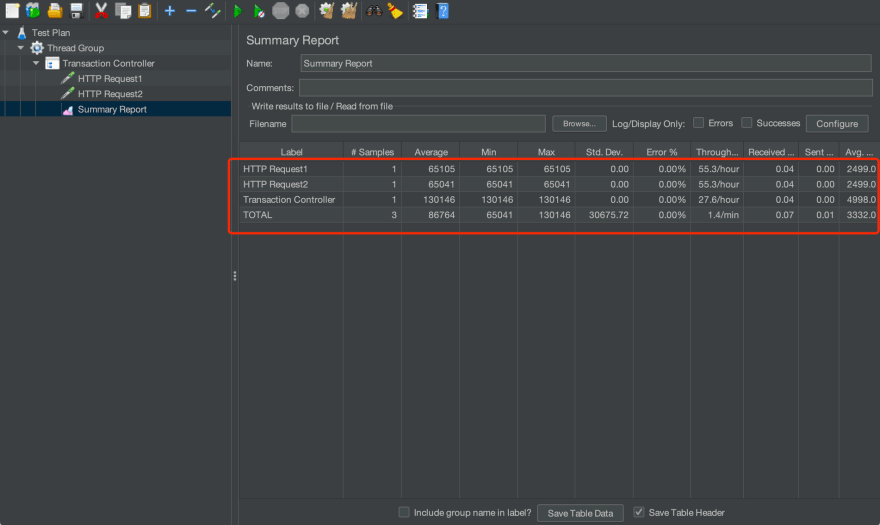 If checked, the summary report is as follows:

It specifies whether to include a timer. If checked, a delay will be added before and after the sampler runs. 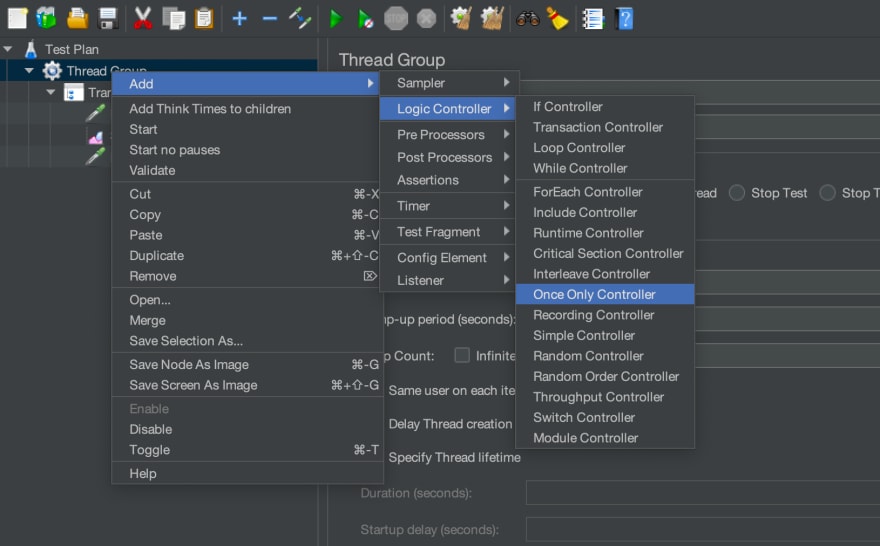 If we set the loop count to 2 and check the result tree after running, we can see that the request "HTTP request 3" under the once-only controller is only executed once, and other requests are executed twice.

A listener is a series of components used to process and visualize test result data. View Results Tree, Graph Results, and Aggregate Report are all listener components that we often use.

This component displays the result, request content, response time, response code and response content of each sampler in a tree structure. Viewing the information can assist in analyzing whether there is a problem. It provides a variety of viewing formats and filtering methods, and can also write the results to specified files for batch analysis and processing. 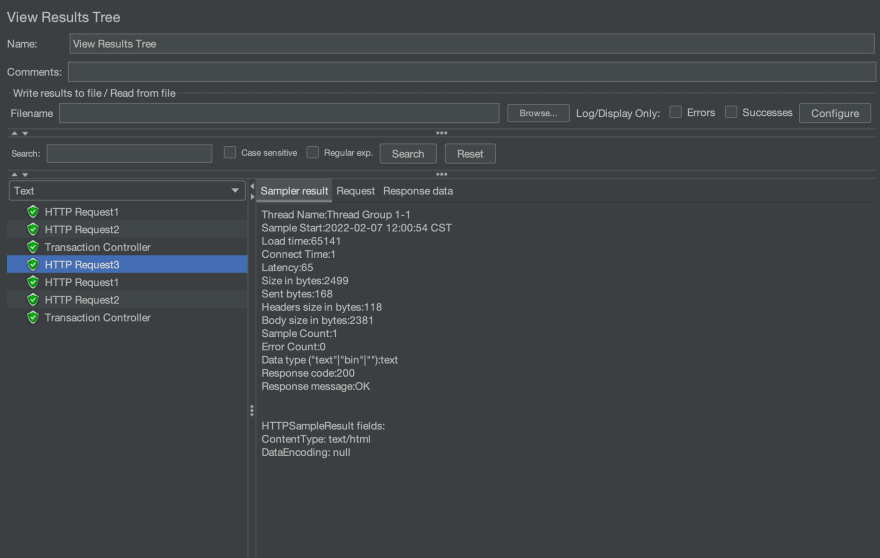 In addition to the "User Defined Variables" component, variables can also be defined in other components, such as test plans and HTTP requests: 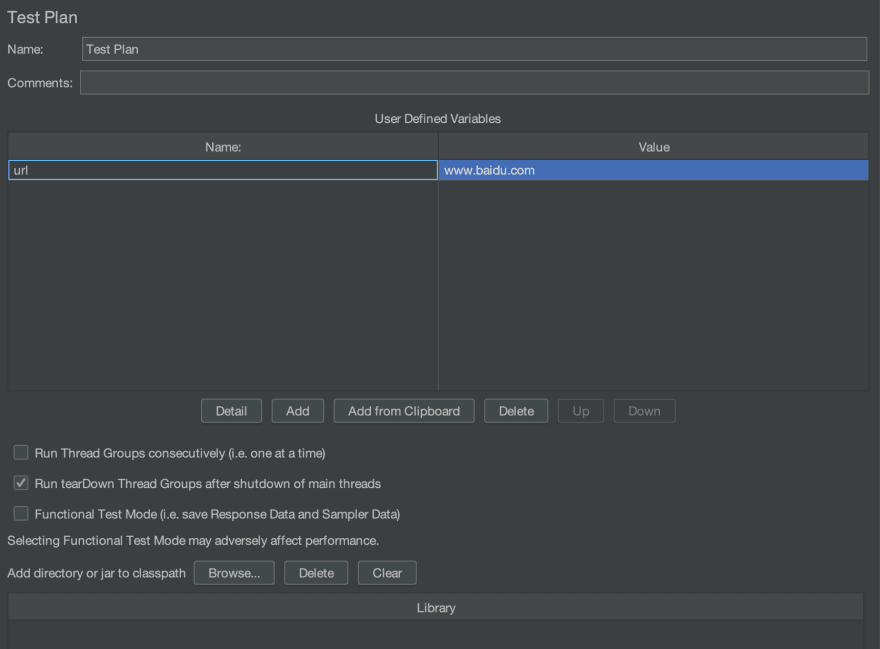 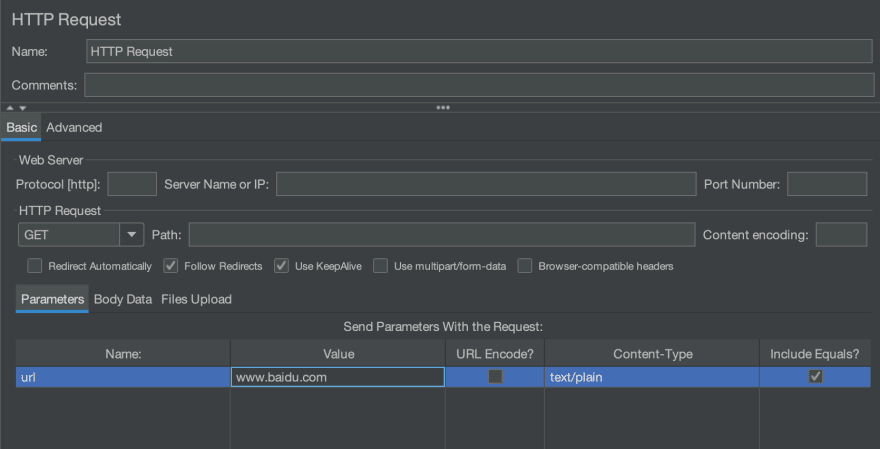 For example, a defined variable is referenced in an HTTP request:

Viewing the execution results, you can see that the value of the variable has been obtained: 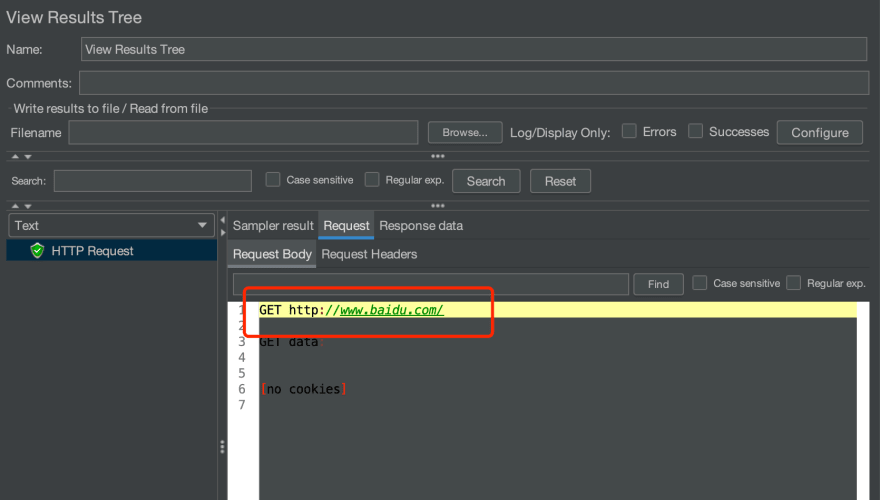 During the performance test, we often need some parameterized input parameters, such as the username and password in the login operation. When the amount of concurrency is relatively large, the data generation at runtime will cause a great burden on the CPU and memory, and the CSV Data Set Config can be used as the source of parameters required in this scenario.

The descriptions of some parameters in the CSV Data Set Config are as follows:

The assertion is to check whether there turn of the request is as expected. Assertion is an important part of automated test scripts, so we should pay great attention to it.

It is used to assert the content of the response in JSON format.

JSON assertion is added on an HTTP sampler in this example, as shown in the following image: 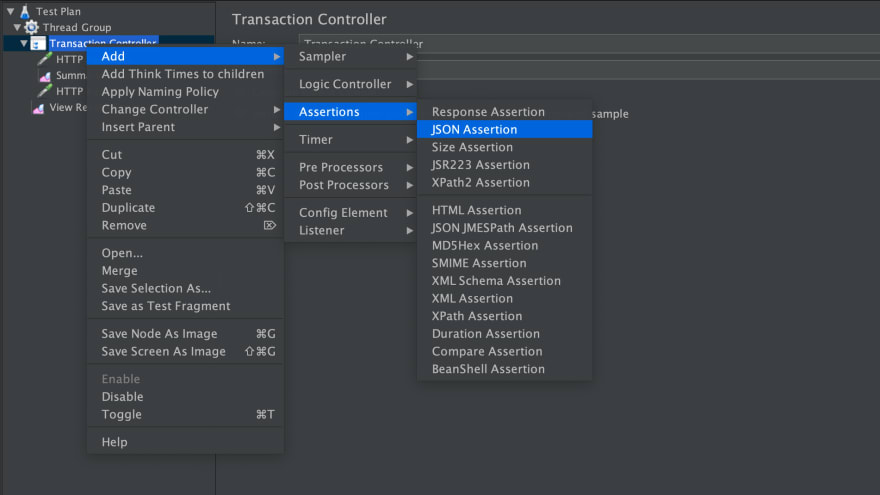 Run the script, check the results, you can see that the assertion is passed.

Run the script, check the results, and you can see that the assertion failed

In the performance test, the pause time between requests is called thinking time. In real world, the pause time can be spent on content search or reading, and the Timer is used to simulate this pause:

Constant timer means the interval between each request is a fixed value.

Adding a constant timer on a transaction controller is shown in the following figure: 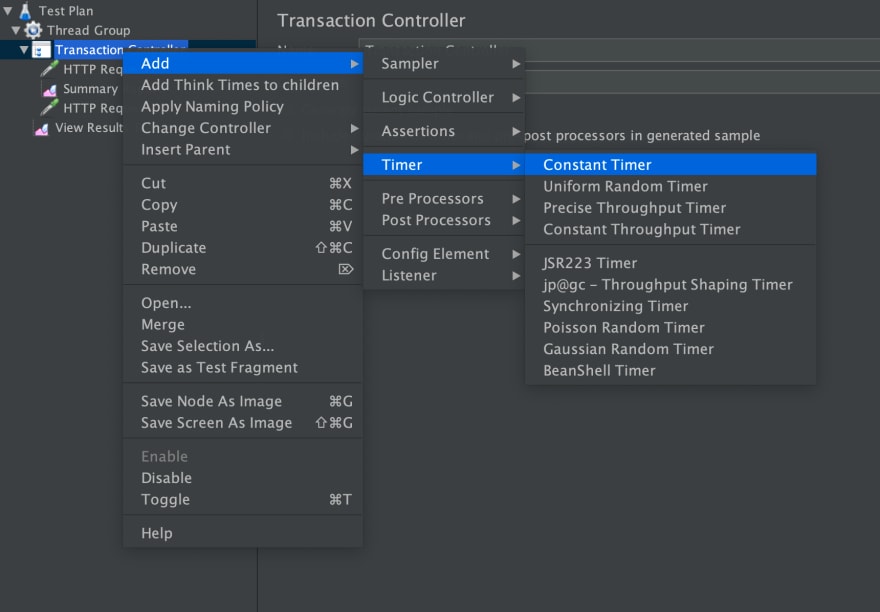 After configuring the thread delay to 100 and 1000 respectively, run the script:

Constant throughput timer is used to control the execution of requests according to the specified throughput.

The following figure shows how to add a constant throughput timer on a transaction controller: 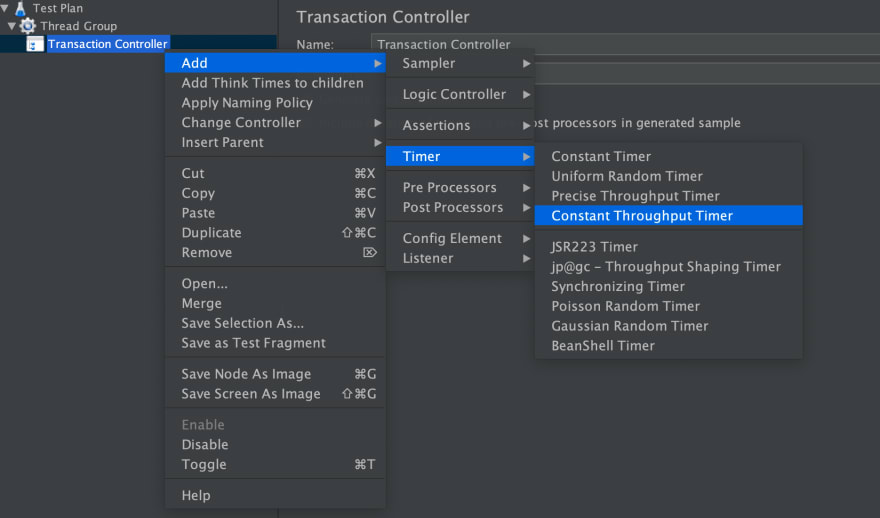 Configure the target throughput as 120 (note that the unit is minutes), select "All active threads in current thread group (shared)" based on the calculated throughput

Run the script, check the results, and you can see that the throughput is approximately 2/second (120/60)

The pre-processor performs some operations before the sampler request. It is often used to modify parameters, set environment variables, or update variables.

The above is the introduction of the main test components of JMeter, and you can try to use it in practice. In the next article, we will explain the use of the MQTT plugin in JMeter.