I'm a JavaScript guy, so this is a bit of a weird article. I recently went through a month's worth of research into unicode for an article and then subsequent video on variable names. JavaScript uses UTF-16 and I put some more specific info into the extra video, rather than the main video.

I'd advise watching it if you're curious. I was recently asked about UTF-8 by another JavaScript developer and so I decided to look into it. Resources online are scarce or not friendly enough that I was asked to turn my personal explanation into an article for future reference.

Every unicode encoding is tasked with a similar problem:

How do we represent all 1.1M possible code points?

The actual number is 1_111_998. In binary this takes up 21 bits. That means it's possible to have a single character that must require us to use 21 bits at a minimum to encode.

We stick to powers of 2 for binary encoding, so our first thought might be exactly what UTF-32 is today. Let's use 32 bits!

This works, but is very inefficient. If we approach a character that requires 21 bits, we'll need to use 4 bytes (32 bits) anyway, but most characters do not have a codepoint that large. This means we are wasting the first 11 bits of every codepoint, at a minimum. In fact, this article only uses 3 characters larger than 122 (the 3 example characters later on in the article)! That's (for the most part) only 7 bits per character!

In comes UTF-16 with a clever trick.

It recognizes that characters with codepoints that require more than 16 bits are even more rare! 16 bits gives us roughly 65k possible codepoints. What we do is reserve 2 separate ranges of 1024 characters out of our initial 65k codepoints available. These are used for "surrogate pairs" (more info my unicode extras video). Using a bit of math we find that if we combine them, we're able to get 20 more bits (enabling 1_048_576 more characters).

If we go by character by character, as computers usually do, we're able to tell whether the codepoint we are looking at is a lone one or a surrogate pair just by checking what range it is in!

This way we can shave off 16-bits for most characters! The surrogate pair ranges are purposely empty anyway, so we're not kicking any characters out. 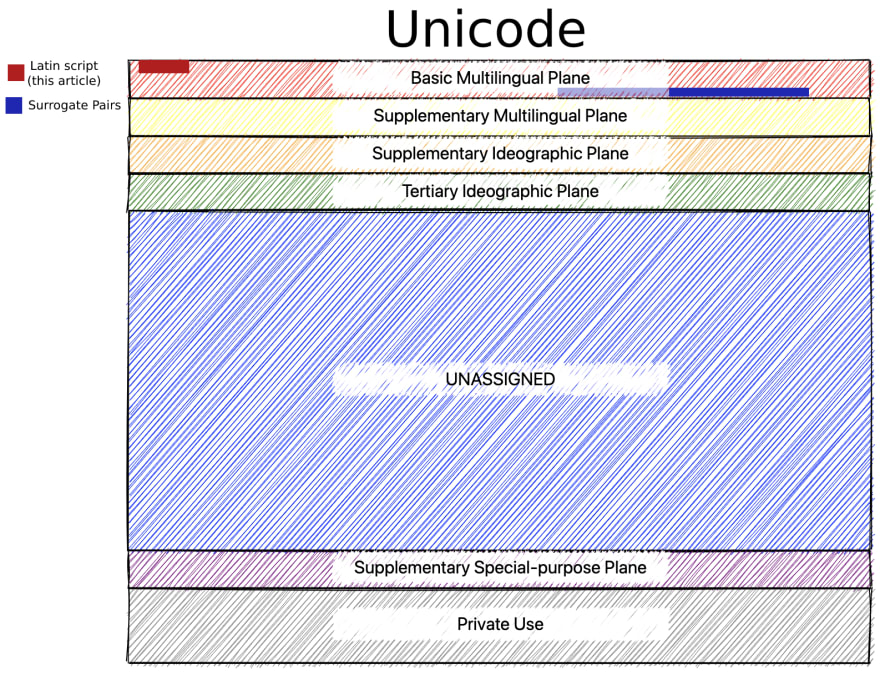 While JavaScript uses UTF-16, HTML traditionally uses UTF-8. Only 8 bits? It looks like we barely got by with 16 bits! Are we going to reserve another few ranges? How? Out of 256 possible codepoints, which ranges do we reserve?!

We could use multiple bytes for larger codepoints, but how would we ever know if we were currently looking at a lone character or one that is meant to be read together with others? UTF-16 and UTF-32 gives us the guarantee that we'll be able to start from anywhere in a file and, provided we know our index, we can regain our footing.

And now the point of the article. UTF-8 takes a different approach. Instead of reserving a specific range, each starting byte will tell us how many more bytes to expect. The answer to this can be either 0, 1, 2, or 3, since UTF-8 characters can be composed of anywhere from 1 to 4 characters.

If we're given a byte that begins with a 0, then this is the only codepoint required to parse this into a character. Using the codepoint of 103 as an example (the character g), its UTF-8 encoding would be 01100111. Notice the leading 0. We can express this codepoint with 7 bits, so we use the leading bit to tell whomever is asking that this is the only number in this sequence. Only one byte!

This works fine up until codepoints over 127. In such a case we are forced to use 2 bytes. 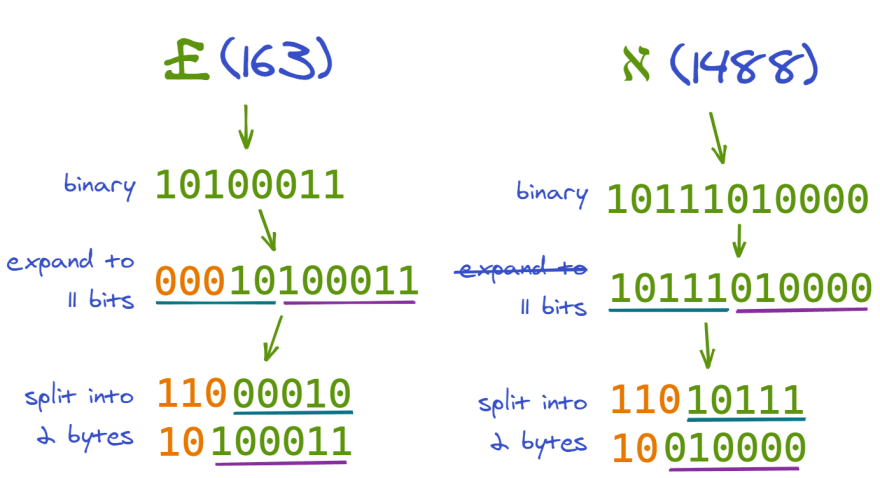 And finally we get to the remaining characters.

Now that we've gone through the explanation, let's make it concise with some steps. Let's say we're placed at a random byte in a file which we know to be UTF-8 encoded.

Because we're in binary-land, we also have quite a few operators at our disposal to make things more efficient - bitwise operators. They're a bit unintuitive at first, so I suggest going through them at first to fully understand what they do before seeing how they're used.

I won't be going over the majority of the code, since it'd be a bit too much for this article (and a bit too boring, frankly), so let's just clarify 2 common operations that use bitwise operators in the code.

From the looks of it, it seems like UTF-8 is the most efficient encoding so far. However, there are clearly some edge cases where it would be much less efficient than something like UTF-16.

As a closing, here are 2 quick tests:

Without looking anything up, we can assert that UTF-8 would be less efficient than UTF-16 for characters with codepoints between 2048-65534. This would favor UTF-16 when such codepoints dominate the medium, like a book rather than a blogpost, where the benefit is only marginal due to the quantity of single-byte characters that UTF-16 forces to be 2 bytes.

UTF-16 would almost always be more space-efficient than UTF-32 unless the Unicode standard opened up codepoints that could be expressed with 22-32 bits. In which case such codepoints would be better expressed with UTF-32.

For most purposes, particularly code in just about any programming language, UTF-8 is more efficient.

In regards to computational efficiency, the efficiency order would go in reverse - UTF-32, UTF-16, and then UTF-8.

Critique? Let me know in the comments!