I've been using Emacs for months now. When you get into this world you see a lot of people saying that Emacs its like an Operating System or that setting up Emacs its a lifetime task, and that's true, you actually never get bored.

I started with a fairly simple configuration back then, with stock Emacs (no Spacemacs, no other people's configuration). At first it looked difficult but I wanted something simple, not a super-big overloaded IDE, that I could control with only the keyboard and doesn't have too many distractions for me so I was happy about that.

Then I started to add those things I didn't wanted. Why? Well maybe because you can, and you can do it with code! Started to learn Scheme/Lisp and Elisp (the Emacs version of this Scheme language) to create a bunch of functions and I saw a lot of videos of the EmacsConf to find new things to do. I moved all my configuration to a technique I now love: Literate Programming (which I'm actually thinking of creating a new programming/scripting language focused on this technique)

Back then, as I said, I added a lot of unneeded features that even though looked good it was "overloading" my Emacs. This is how it looked (2017/7/5) 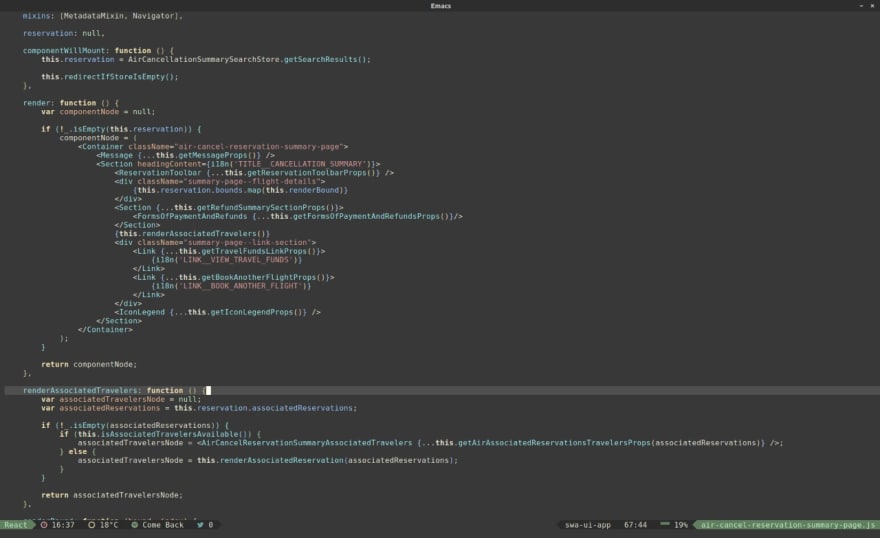 Coming Back to Stock Emacs

As the time went by, I understood that Emacs can be an IDE but it's more like an Operating System and since I use CLI programs, Emacs should be one of those. I started to remove unnecessary things from my configuration and replacing packages to Elisp functions (Still in progress with these). I also started creating my own low-contrast/low-distraction theme.

I use Emacs everywhere and for everything so I need my configuration wherever I go. I share my files through GitHub so you can checkout and download my configuration from here: https://github.com/elnawe/.emacs.d.

This is the current state: 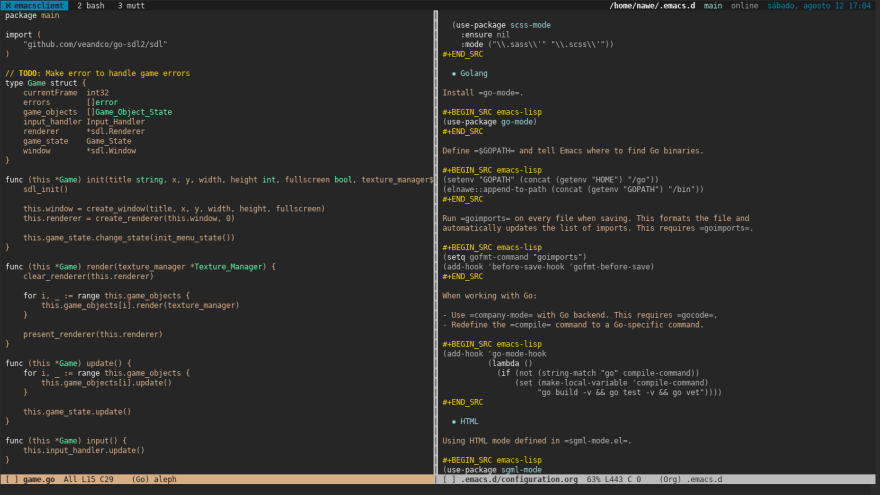 PS: When will we have dev.to's API? I want a Terminal client! :D

Once suspended, elnawe will not be able to comment or publish posts until their suspension is removed.

Once unsuspended, elnawe will be able to comment and publish posts again.

Once unpublished, all posts by elnawe will become hidden and only accessible to themselves.

If elnawe is not suspended, they can still re-publish their posts from their dashboard.

Once unpublished, this post will become invisible to the public and only accessible to Nahuel Jesús Sacchetti.

Thanks for keeping DEV Community 👩‍💻👨‍💻 safe. Here is what you can do to flag elnawe:

Unflagging elnawe will restore default visibility to their posts.