As commercial software products scale, an important consideration that often gets overlooked is how best to structure the codebase as the application(s) grows. Not at the level for how best to structure the code within an application, but in the broader sense of, 'how do we structure our application/s so they work together effectively?'. Failure to appropriately plan for this can be harmful for cross-team collaboration with its impact on agile workflows as well as lowered developer satisfaction due to difficulty when building on the existing codebase. Considerations for these structures are highly dependent on the tech stack, nature of the application, and agile workflows the team has in place.

When considering the repository structures for an organisation there are two primary schools of thought, mono repositories or poly repositories. Monorepos are a structure where all code for the organisation is housed within a single repository, typically assisted by tooling to handle obstacles that may arise. Polyrepos are the opposite, where an organisation will have separate repositories for sections of a system that handle different concerns. Large companies like Google, Facebook, Microsoft, and Uber utilise monorepos to store their codebase (Google reportedly has the largest monorepo in the world, containing an estimated billion lines of code).

Simply put, a monorepo is a single repository containing multiple distinct projects with well-defined relationships and a polyrepo is multiple repositories containing distinct projects with hard boundaries between them (separate repos). With this said, it is important to remember that a monorepo is not a monolith and should not be thought of as such. A good monorepo should be the opposite of a monolith and the same goes for the project within it. A monorepo should be considered as a group of applications, developed and deployed separately with reused code shared locally within the project as packages.

The current industry standard for organisations building products is the utilisation of polyrepos which was done this way for several reasons. The thinking behind polyrepos is underpinned by the idea of working on multiple projects across teams, with configurations for their build and deployment managed independently of one another. From an agile perspective, this allows for teams to work independently from one another, determining release cycles, tooling, and standards within the project. Although this structure does work, it creates significant inconsistencies between projects in regards to tooling, code standards, and versioning and requires constant communication amongst teams to maintain relationships between projects to repair breaking changes. This structure also leads to cumbersome code sharing, requiring separate repositories to be set up to hold this code, CI process to be configured and versions to be managed by each project utilising the library. The common alternative to this is teams will create their own implementation or code will be copied over, creating high code duplication between projects. Team autonomy is the main factor that underpins the benefits of a polyrepo for modern software teams, allowing teams to have full control over the standards, CI, and release cycles for their project.

Monorepos attempt to solve some of these problems. It’s important to understand the actual repository structure of many modern monorepos in order to grasp the benefits and solutions they provide as an alternative to polyrepos. 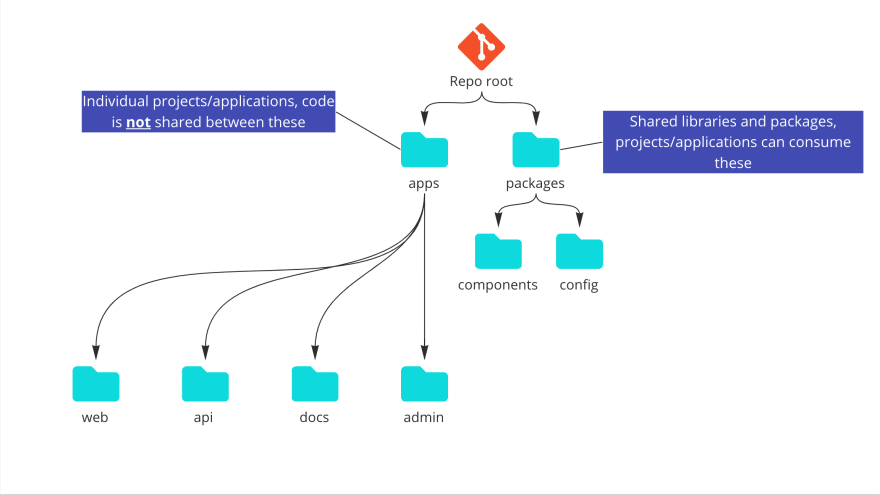 As is evident with the above repository structure, there are typically two funnels where codebases fall, applications or projects (independent codebases that function standalone) and packages or shared libraries that get consumed by those codebases. Immediately you can see that managing shared packages inside the same repository as the codebases which consume them will ultimately lead to increased code reuse, better maintainability, and faster, less cumbersome resolution of breaking changes. This is a clear advantage over polyrepos, providing a sleeker, more readable, and ultimately a more maintainable solution.

One big advantage of polyrepos is the ability to manage build pipelines and deployments independently from one another, a big advantage when working in large teams with applications that have a lot of moving parts. However, as the functionality of modern CI tooling, scoping pipelines based on folder level changes allows monorepos to retain the ability to test, build, preview and release code independently of other interconnected projects or shared libraries. This is proven by large-scale software teams such as Google and Uber, which utilise build tools such as Bazel to provide build caching allowing them to achieve 100-1000s of builds and releases daily. (Could you imagine rebuilding and redeploying every project and shared library that these companies maintain 😰)

By considering a monorepo as a group of applications, while housed in the same repository and may interact to form a large software application, which are completely isolated from one another from a development and deployment perspective, and as a result, retain the same separation of concerns, autonomy, and maintainability as a polyrepo.

You've decided to implement a monorepo, awesome! But now you're a bit overwhelmed with all the options for tooling, the conversion process, and the impact it will have on full project rebuilds. It can be intimidating, especially for a JAM stack, as there are a number of quality tools to choose from, many of which achieve very similar goals.

When I migrated the stack for the company I work at, I took the following steps to ensure a smooth transition.

I hope this article has helped in your journey into monorepos, if you have any questions, feel free to drop them in the comments, along with any feedback (it's my first article, would love to hear your thoughts). Stay groovy.

Is GitHub Copilot a Threat to Developers?

Elliot Alexander
I build stuff for the web :)
The perfect open-sourcer does not exist
#opensource #beginners #github #productivity
Who or what are you grateful for in tech?
#discuss
15,000 GH stars in a year: how we did it 🤩
#opensource #career #devjournal #programming

Once suspended, elliotalexander will not be able to comment or publish posts until their suspension is removed.

Once unsuspended, elliotalexander will be able to comment and publish posts again.

Once unpublished, all posts by elliotalexander will become hidden and only accessible to themselves.

If elliotalexander is not suspended, they can still re-publish their posts from their dashboard.

Once unpublished, this post will become invisible to the public and only accessible to Elliot Alexander.

Thanks for keeping DEV Community 👩‍💻👨‍💻 safe. Here is what you can do to flag elliotalexander:

Unflagging elliotalexander will restore default visibility to their posts.