I am a software engineering student at the Flatiron School and my cohort recently reached our halfway point in the course. It is incredible how much I have been able to learn over the past seven weeks. I have had the opportunity to learn two languages in Ruby and JavaScript, and apply my new skills by building projects with my amazing classmates. You could say I was riding a high heading into this past weekend; everything seemed to be clicking and I was feeling very confident about my new abilities. I decided to sign up for a tech-for-good hackathon in Seattle as I thought it would be an excellent opportunity to meet other members of my local developer community and potentially contribute to a fulfilling project. What happened next was that imposter syndrome hit me like a freight train.

I arrived bright and early on Saturday morning, eager to give this "hackathon" thing a go. There were about eight different groups that presented their projects in the morning and discussed how attendees could contribute their talents. I was intrigued by a sidewalk mapping project that sought to use Open Street Map to map sidewalks around the city in an effort to better-document walkability for people with disabilities. I volunteered to work with this group and was joined by several very talented developers. While discussing the project, it was decided that I would dive into the PostGreSQL database tables and attempt to brainstorm how we could alter the schema to fit the new goals of the project. The code base we were working with was written in Python and was using Flask as a web framework. I had very little experience with all of these technologies and I was immediately in over my head.

While the dread and anxiety started to build, I began searching through the code base in an effort to locate information on the database schema. Being trained in Rails, I was used to relying on the schema.rb file that was generated each time database migrations were run. I was struggling to find a similar file in the Flask directories and began Googling like a mad man to figure it out. Meanwhile, a teammate who had set up shop next to me was flying through code at a speed I had never seen. He was furiously switching between several terminal windows on his Linux machine to work on getting the program running on his local environment. I watched in awe as he flew through terminal commands and Python snippets all while quickly troubleshooting any errors that arose. 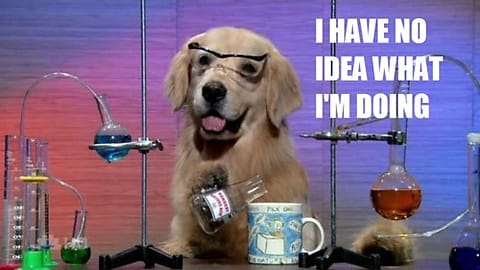 As the day continued on, it was more of the same. Someone on my team would ask me if I had ever used technology "x" or if I knew how to do some programming task "y", and my answer was always the same: no. I was amazed at the patience and kindness my team members exhibited throughout all my no's. I never felt judged for not knowing and was often met with helpful explanations or words of encouragement. Even with all the encouraging words and helpful coaching, it was hard not to feel out of place. Realizing how much I had to learn was exciting, frightening, and stressful all at the same time.

Although I came into the hackathon feeling like I had a firm grasp on (some) programming concepts, I now felt like I knew nothing. I felt like a complete fake, imposter, scam, whatever you want to call it. It was as though I had suddenly been exposed to a vast ocean of knowledge that was beyond me. My ignorance of what I didn't know had faded away and I suddenly realized that I was still very much at the start of my coding journey.

Now that I have had my first real taste of imposter syndrome, where do I go from here? The answer is that I must keep learning and progressing. Although my time at Flatiron school will conclude in a mere seven weeks, I know that coding will be a lifelong learning endeavor, and this excites me. I can't wait to see what I'm able to build as I continue to pick up new skills and learn new technologies. Imposter syndrome is inevitable, so I suggesting taking it head on and using it as a learning experience. I wish everyone the best of luck on your coding journeys!