Imagine you have the following code:

That renders this button:

What would be displayed on that button if you click it?

If you guessed "Counter value is: 1", you were wrong!

What we get is this:

In our example, although we clicked on the button, the event handler of its div parent was triggered as well. That's because events don't just affect the target element that generated the event—they travel up and down through the DOM tree to reach their target.
This is known as event propagation: a mechanism that defines how events propagate or travel through the DOM tree to arrive at its target and what happens to it afterward.

The concept of event propagation was introduced to deal with the situations in which multiple elements in the DOM hierarchy with a parent-child relationship have event handlers for the same event, such as a mouse click. Now, the question is which element's click event will be handled first when the user clicks on the inner element: the click event of the outer element, or the inner element? 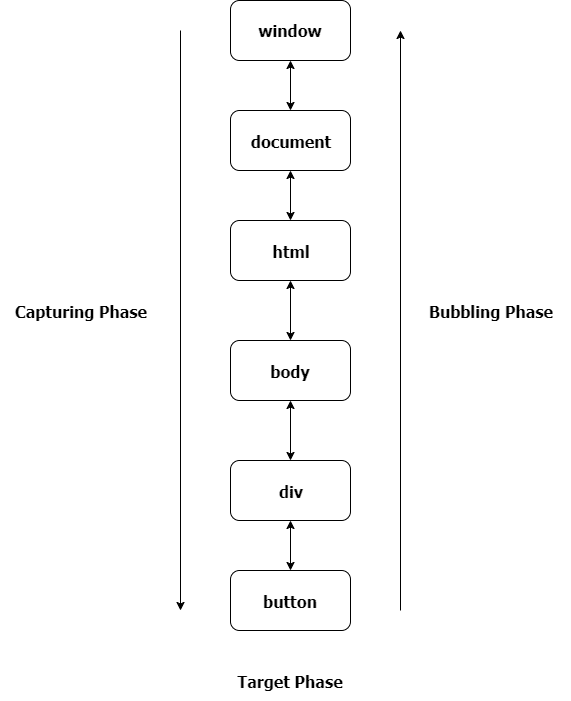 Event Bubbling and Capturing in React

Bubbling and capturing are both supported by React in the same way as described by the DOM spec, except for how you go about attaching handlers.

Bubbling is as straightforward as with the normal DOM API; simply attach a handler to an eventual parent of an element, and any events triggered on that element will bubble to the parent, just like in our example in the beginning.

Capturing is just as straightforward, but instead of the onClick prop, you have to use onClickCapture on your element.

How Do You Stop an Event from Bubbling/Capturing?

Going back to our original example, how can we make sure our counter is only incremented by 1 when we click the button?

The answer is using stopPropagation()
This method of the Event interface prevents further propagation of the current event in the capturing and bubbling phases.
It does not, however, prevent any default behaviors from occurring. (if you want to stop those behaviors, you would need to use the preventDefault() method)

If we change our code to:

Our counter will be incremented by 1 each time we click the button, thanks to event.stopPropagation() which prevents the event from bubbling up to button's parent and triggering the parent's onClick as well.

However, be careful when stopping events from propagating, because sometimes you can’t really be sure you won’t be needing the event above in one of the element's parents, maybe for completely different things.

If this is the case, one alternative to stopping the propagation is writing your data into the event object in one handler and read it in another one, so you can pass to handlers on parents information about the processing below.

Once suspended, eladtzemach will not be able to comment or publish posts until their suspension is removed.

Once unsuspended, eladtzemach will be able to comment and publish posts again.

Once unpublished, all posts by eladtzemach will become hidden and only accessible to themselves.

If eladtzemach is not suspended, they can still re-publish their posts from their dashboard.

Once unpublished, this post will become invisible to the public and only accessible to Elad Tzemach.

Thanks for keeping DEV Community 👩‍💻👨‍💻 safe. Here is what you can do to flag eladtzemach:

Unflagging eladtzemach will restore default visibility to their posts.