There is a popular programming term closure, that JavaScript developers should know. Unfortunately, most developers struggle to get their heads around this concept.

In this article, I will explain Closure in clear terms using simple-to-understand examples.

To dive into Closure, it is essential we understand the following concepts:

Consider the analogy below:

The above is essentially how scope works in JavaScript.

Every variable has a scope, If a variable is not in the current scope, it will not be available for use.

JavaScript has the following kinds of scopes:

For variables declared outside of any function or curly braces {} the scope is the whole program (you can access such variables wherever you want). These are called global.

If a variable is defined in the global scope, it is accessible anywhere in your code (including functions, objects, etc.)

See the code below :

In the code above:

*Local variables get created when a function is declared and deleted when the function is executed.
*
See the examples below:

The output of the code will be

The error is displayed because the user variable is deleted when the isLocal() function is executed.

Because local variables are only accessible inside the body of the function, variables with the same name can be used in different functions.

See the code snippet below

The output of the code below will be :

Prior to ES6 (2015), JavaScript had only Global and Function Scope. The introduction of the let and const keywords in ES6 provided Block Scope in JavaScript.

Variables declared within a code block or curly braces {...} have block scope, and cannot be accessed from outside the block. 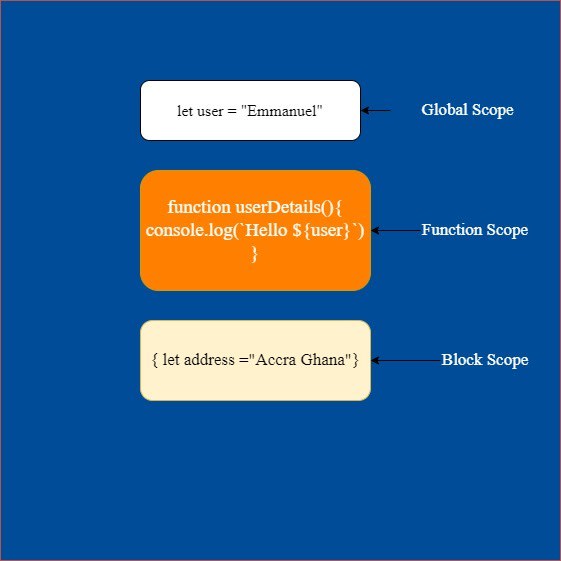 A nested function is a function defined inside another function.

greetUser, and "newCount" are nested functions because they are declared inside another function.

Likewise, the newCount function can access the outer variable count.

Let's explore why the above is possible in the next topic.

The lexical environment will be pre-populated with all declared variables in the code.

When a function executes, prior to its execution, the lexical environment provides the environment record to store the parameters and or variables declared in the body of the function.

If a variable is declared in the global scope, a lexical environment is also created to store the variable in the environment record.

Like the example above, when you declare a global variable and a function, you have two lexical environments respectively:

The term "lexical" relates to the fact that lexical scoping uses the location where a variable is declared within the code to determine where that variable is available.

*A variable defined in the global scope can be accessed inside the inner scope or any block scope even when it is not declared in the block scope. *

To rephrase, an inner or block scope can** "look outside"** to access variables declared in the global scope.

The output of the code will be 70. Do you know why?

Accessing a variable in the lexical environment

When a code wants to access a variable, the environment record of the internal environment is searched first, followed by the record in the outer environment, then the outer one, and so on, until it gets to the global scope. If the variable is not found anywhere, an error will be thrown.

When the code above is executed:

Take a look at this other example

In a nested function, when the outer function is executed, it can return an inner function. Because functions are values, the inner function can be assigned to a variable and executed later in our code.

See the code below

Take a look at this other example

Here we have two functions

Keep in mind, anytime we execute a function, any variables defined in the function scope cease to exist.
**
In effect, in the console.log(a+b), the variable b exists prior to the execution of the outer function.
Once the outer function has been executed, the b variable, **no longer exists.

What this means is that in console.log(a+b), the variable b exists only during the execution of the outer() function. Once the outer function has finished executing, the variable b no longer exists.

Variables of a function are recreated anytime the function is called, and live up until the function completes execution.

The question is, what happens to variables when the function call that created them has completed its execution?

This question introduces the concept of closure.

From the above, we know that variables get deleted when the function that created them has completed its execution.

** Hence, it should not be technically possible to access the b variable in the inner function.**

That said, the inner function can access the variables of the surrounding function due to closures in JavaScript.

A closure gives you access to an outer function’s scope from an inner function.

*The inner function then carries the preserved variables along with it (everywhere it goes)
*
The following code shows an example of this. It defines a function, mainFunction, that creates a local variable. It then returns a function that accesses and logs this local variable to the console.

The output of the code above will be Hello Emma. 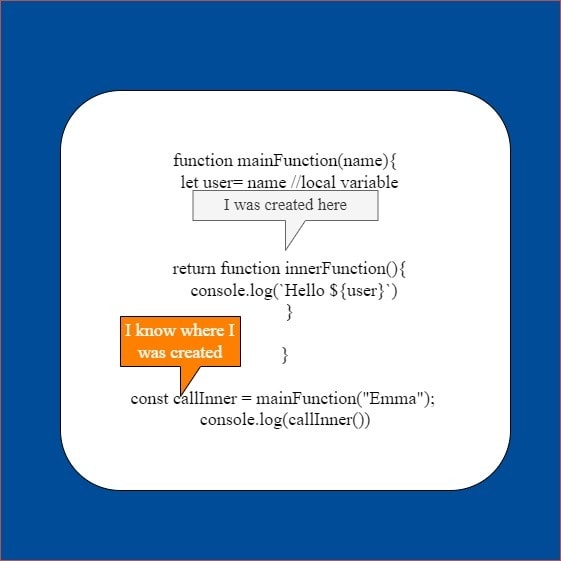 In this example, we want to create a function that allows us to send emails to users, the user reads the content of the mail when he clicks on the button.

To achieve this, we declare two functions composeMail and emailContent.

We would also define a click event listener, that listens for a click of a button to enable us to read the content of the email.

Examine the code below:

The output of the code will be

Let's walk through the code step by step

Eg.2 Which variables are accessible?

Which of the timeOfDayvariables is accessible, in the code below?

In the example above, the function greetUser has a local variable timeOfDay, it also creates another anonymous function. That new function can be called somewhere else in our code.

In the global scope, we also declare another timeOfDay variable and assign a value to it.

When we execute the return function, which of the timeOfDay variable will it access, and what would be the final output?

Note that, if there were no timeOfDay variable in the greetUser function, then we would search outside that function, for it, and it would be found in the global scope.

In that case, the value of the variable will be:Good morning. Hence the result would be Good morning Emmanuel, what would you like to do today.

*The ability to reference a specific instance of a local variable in a surrounding scope is called closure.
*
A function that references variables from local scopes around it is called a closure.

This action not only frees you from having to worry about the lifetime of variables but also makes it possible to use function values in unique methods.

The Scope Chains in Closure

In closure, the inner function has three scope chains:

Let's wrap up with another example:

To reiterate the concept of closure, once the learnFruit() has been executed, we would have expected the variable declared in its scope to be deleted.

However, prior to execution, the getFruit function is able to access and keep copies of the outer variables.

Regardless of where the getFruit is run, we can still use any variables defined in the scope chain.

Closures permit you to save a snapshot of the scope where the function was initially declared.

Closure is like keeping a copy of the local variables of the function.

It helps eliminate the duplication of effort with a program or to hold values that need to be reused throughout a program so that the program doesn't need to recalculate the value each time it's used.

How to get into React Native?

Once suspended, efkumah will not be able to comment or publish posts until their suspension is removed.

Once unsuspended, efkumah will be able to comment and publish posts again.

Once unpublished, all posts by efkumah will become hidden and only accessible to themselves.

If efkumah is not suspended, they can still re-publish their posts from their dashboard.

Once unpublished, this post will become invisible to the public and only accessible to Emmanuel Fordjour Kumah.

Thanks for keeping DEV Community 👩‍💻👨‍💻 safe. Here is what you can do to flag efkumah:

Unflagging efkumah will restore default visibility to their posts.