Github Actions — How to ship code to GCP Cloud Run

Deploying code to production is both time consuming and a delicate process. Getting things wrong might take your service down and eventually might hurt your users and cost you money.

The solution of course is automating as much as possible.

FYI: the blog post assumes basic knowledge in node.js/docker, a GCP account with permissions to deploy code and to create service accounts and a github account.

What is GCP Cloud run?

In the spirit of managed services, Google Cloud provides us with a service called Cloud Run.

What can we understand from that sentence?

So basically, anyone in need for running containers can benefit from using cloud run.

We want to run containers!

We can wrap our code in a container, docker for example, push it to GCP’s container registry (or another registry if we want) and use the gcloud cli tool to deploy it to cloud run or do some updates from the gcp console website.

But, that’s a repetitive process, it’s human error prone, and it consumes time. A wonderful oppourtonity for automatation.

There are many CI/CD tools on the market, in this post we’ll focus on the kind of newish Github Actions

What are Github Actions?

GitHub Actions makes it easy to automate all your software workflows, now with world-class CI/CD. Build, test, and deploy your code right from GitHub

Github Actions give us the capability to automate processes, so we can program what we want to do and know that it repeats itself exactly the same when we need it.

An action is basically a yaml file describing a series of instructions (called steps). Each step can be another action. I’m no going to go any deeper, documentation can be found here https://help.github.com/en/actions/getting-started-with-github-actions/core-concepts-for-github-actions

One key point is: Github provides an action’s marketplace, meaning we probably won’t have to invent the wheel unless we’re doing really bleeding edge stuff. The marketplace can be found here: https://github.com/marketplace?type=actions

If you already have a repo you’re working on, skip this step. Otherwise, go to Github.com, log in to your account a create a new repo, name it what ever you like and clone it to your drive

Run the following commands in the repo directory:

This is the Google cloud platform official cloud run example for github actions. Create the exact same file in your local repo under .github/workflows/cloud-run.yml

We won’t deep dive to the file structure, let’s focus only on few points:

That is the project id we’re going to use in gcp. To find your project id, go to https://console.cloud.google.com/. Log in if you need to, and open the projects list from the top left menu. In the modal window, you’ll see the list of your projects, their names and ids.

You can control the service name and which region it is going to run.

We need to provide a service account and credentials so github can control our GCP project.

Go over the file if you want to see the rest of the stuff that’s going on, but it is fairly basic and does exactly what we described in the manual part. 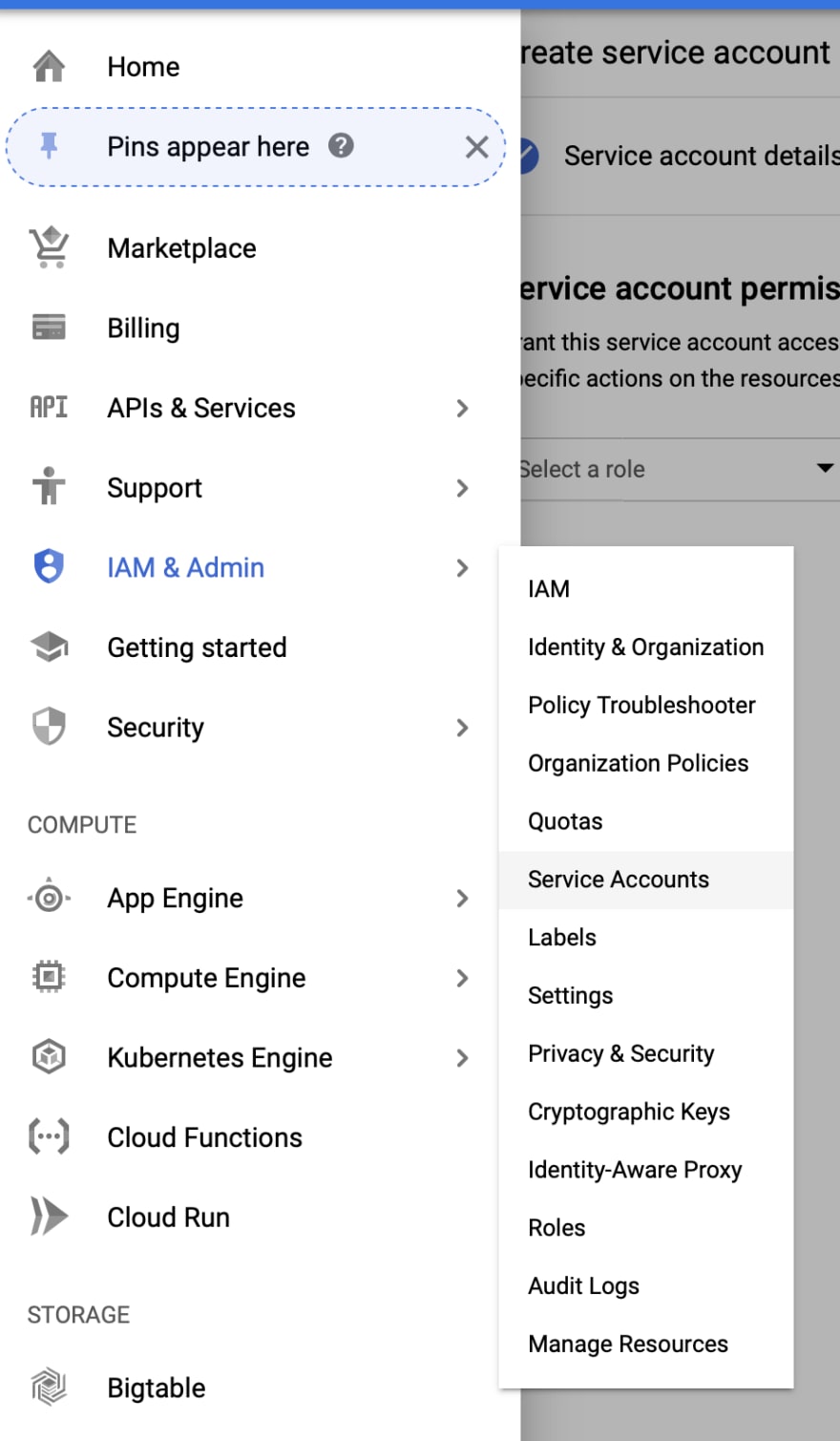 Fill in service account name, i.e. github-action, and a description 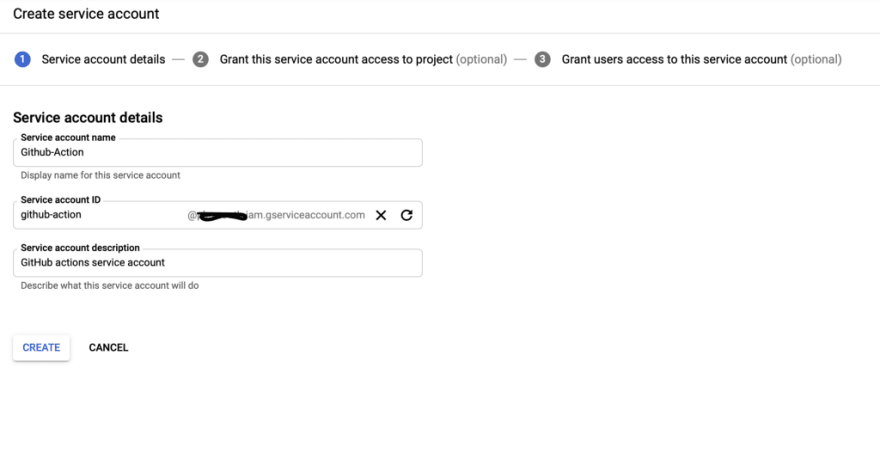 Click Create, and continue and done in the following two screens. You should now see your service account created successfully.

If you remember, we had three secrets in the cloud-run.yml file:

To get the GOOGLE_APPLICATION_CREDENTIALS, click on the right menu and select create key 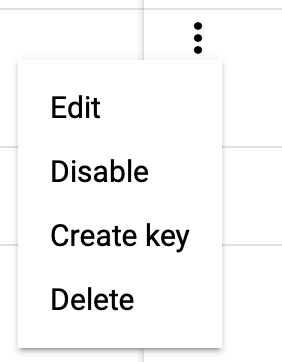 The following window will show: 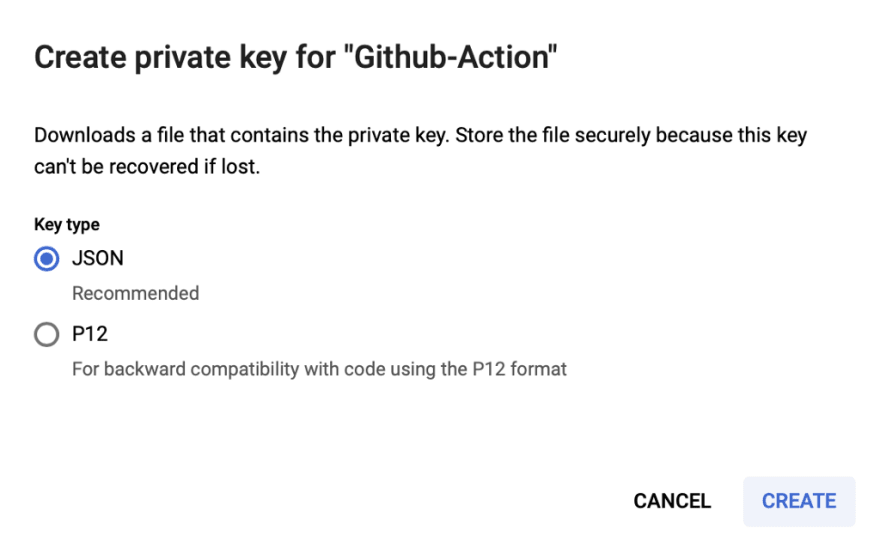 Make sure you leave JSON selected and click create. A JSON file will be downloaded to you computer. Any one who has that file has the service account permissions to do what ever he wants. keep it safe, surely not as part of your repository.

The final step, it to base64 the content of the JSON file. On a mac you can use the following in terminal:

Save the result, we will use it soon.

Our service account is worthless right now, it has no roles and it can’t do anything. Let’s give it some powers. 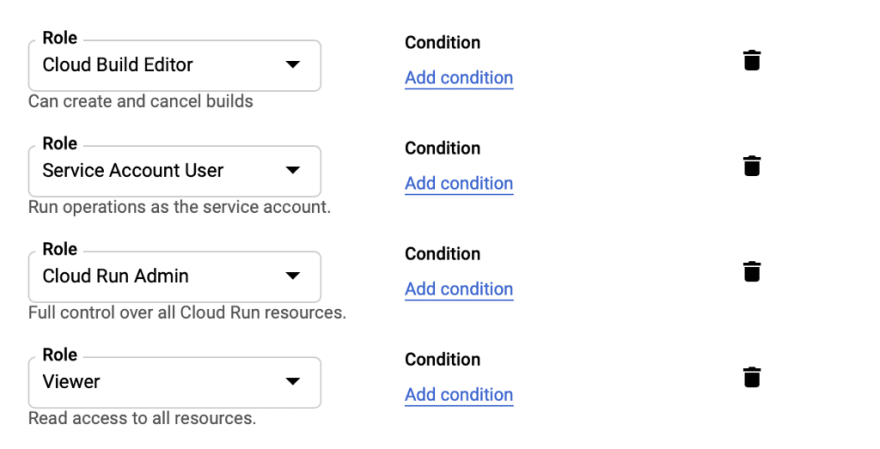 Alright, we’re done with GCP, Open your repo in Github’s website. Go to settings and select the secret tab 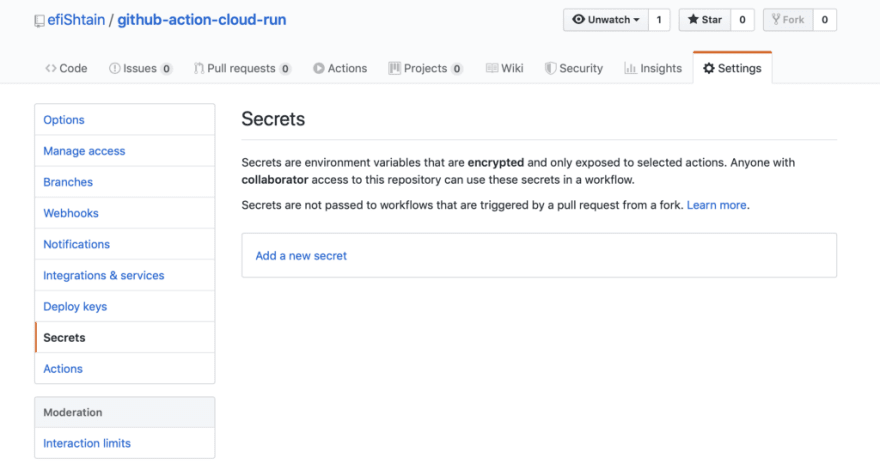 Add 3 secrets to the repo:

That’s it! we’re fully set! you can commit your code and let github do the work. Go to the actions page, there you would see what is going on. Here is an example from some of my playground using github actions. 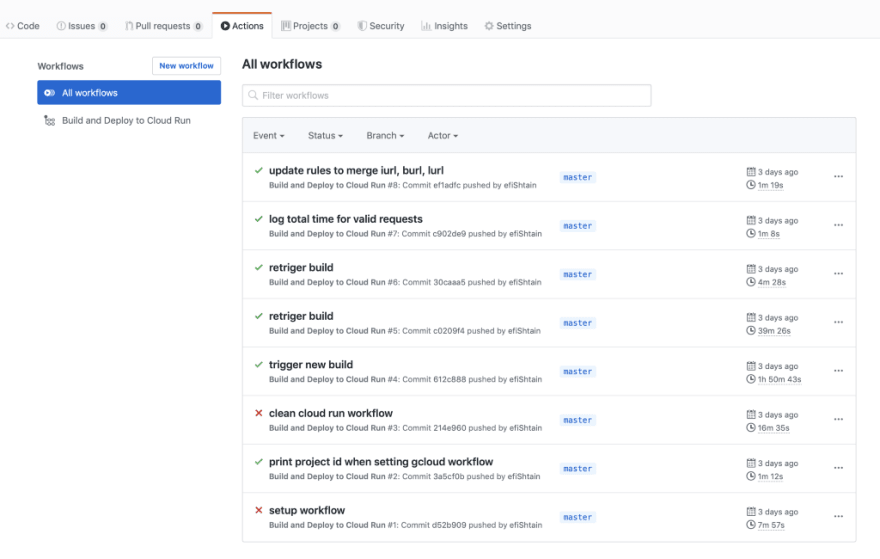 This was kind of a long process, But you only have to do it once, and i tried to describe the hard parts in details.

You now have a fully functioning Github Action which deploys a cloud run container and hides all the delicate repetitive tasks so you can focus on coding.

With that said, this is only touching the ice tip. This solution is not fully production ready as there are more things to consider like handling failures, rollbacks, canary testing, unit testing and so on.

Using `socat` in Docker to power a single-use download service

Docker Swarm Vs. Kubernetes — What You Really Need To Know

Docker on Windows or Ubuntu for development?