We've created this basic introduction to help you make the transition from Python to Ruby. We'll go over their main differences and then take a dive into Ruby's syntax so you can get hands-on with Ruby code quickly.

Ruby and Python are both popular programming languages known for their speed, simplicity, and user-friendly syntax. Both languages are flexible, object-oriented , dynamic, and have a lot of useful frameworks and libraries to use, particularly for web applications and web development (Ruby on Rails for Ruby or Django for Python).

Ruby also allows for functional programming and is known for being very similar to written human languages, making it easy to learn.

Python is an interpreted, high-level general-purpose language, created by Guido van Rossum with the goal of code readability. Python is know well-loved for its robust standard library.

Both Ruby and Python offer higher annual salaries than other software development languages, including PHP, JavaScript, and Java.

Python is currently the go-to language for machine learning (ML) and artificial intelligence (AI) due to its extensive libraries and visualization tools. Ruby does offer some competitive options, but there is a long way to go before it will hold a torch to Python. So, if you are looking to work in data science, Python is the winner.

The main web frameworks for both Ruby and Python, Django and Ruby on Rails, are rather similar. Both are based on the classic model-view-controller (MVC) pattern, and they both provide similar repositories (PyPi for Python and RubyGems for Ruby). Both frameworks perform well and are easy to learn.

Both languages have large, active communities, which Python's community being a bit larger, namely because Ruby is most popular for its development tool Ruby on Rails. Both communities seem to be equally active and supportive.

One benefit to Ruby is that there are unique Ruby forums and job boards since the language is more specialized in some regards.

Now that we understand the difference between Ruby and Python at a high level, let's dive into the main code differences between the two. We've compiled the main things that differ from Python below.

In the Ruby programming language:

Now that we understand how Ruby and Python differ at the code level, let's look at some actual Ruby code, starting with the classic Hello World program. Take a look below and note how simply Ruby's syntax is here.

There's even a simpler way to do this. Ruby comes with a built-in program that will show the results of any statements you feed it, called Interactive Ruby (IRB). This is the best way to learn Ruby. First, open IRB:

You will get the following:

The second line tells us the result of the last expression. We can print this using the puts command we learned before.

Here, => nil is the result of the expression, since puts always returns nil.

Let's now quickly go over the basics of Ruby's syntax that may be different from what you're used to in Python. Note how Ruby differs and how it is similar as you read.

In Ruby, you assign a name to a variable using the assignment operator =, like so:

Here is a list of the different kinds of variables in Ruby:

Keywords and identifiers are similar to Python. Identifiers are case sensitive, and they may consist of alphanumeric characters and underscore _.

Ruby's reserved keywords include the following: 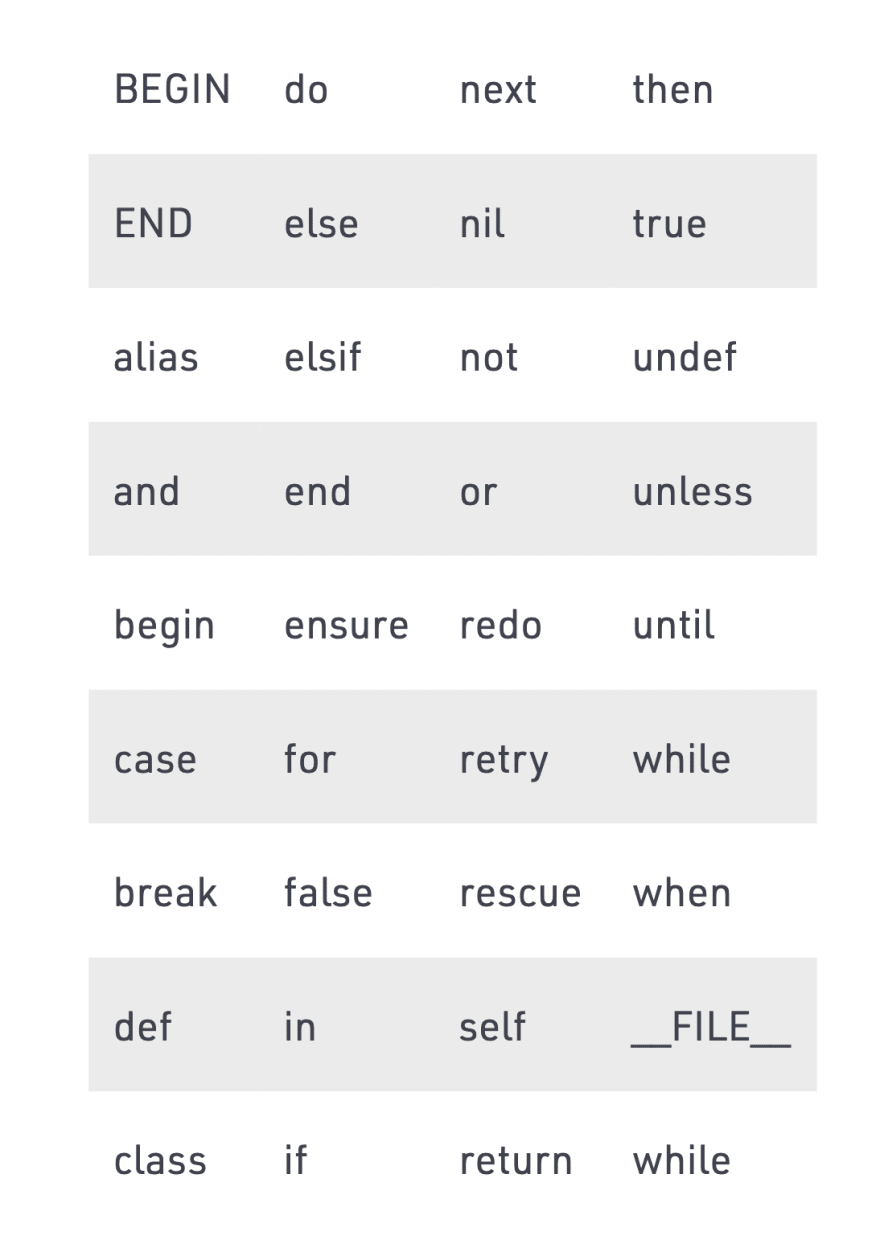 In Ruby, multiplying a String by a number will repeat a String that many times.

Some important methods for Ruby strings include:

Pro Tip: Ruby's percentage sign % shortcut can be used with strings and arrays

In Ruby, you can create a Hash by assigning a key to a value with =>. We separate these key/value pairs with commas and enclose the whole thing with curly braces.

This defines a Hash with three key/value pairs, so we can look up three values (the strings "eins", "zwei", and "drei") using three different keys (the strings "one", "two", and "three").

Some important methods for Ruby hashes include:

In Ruby, we create an Array by separating values with commas and enclosing this list with square brackets, like so:

Like in Python, there are all sorts of things you can do with Arrays. The most important methods being:

In Ruby, parenthesis and semicolons are not required, but we can use them. However, we follow these basic rules:

There are three main ways we can add comments to a Ruby program.

In Ruby, we define methods using the def keyword followed by method_name. IT ends with the end keyword.

We pass parameters to our methods in parentheses.

In Ruby, we create classes using the class keyword followed by the name of the class.

Note: The first letter of your class names should be a capital letter.

In Ruby, objects are created with the new method.

Conditional statements are similar to most other languages with a few slight differences. Take a look at the examples below to get at sense of how they look in Ruby.

Output: The number is between 1 and 10

Ruby also has a shorthand for working with conditional statements. So, we could write this bit of code:

What to learn next with Ruby

Now that you know the basics of Ruby and know how it differs from Python, you're ready to cover more advanced topics. We recommended studying the following concepts next:

To get started with these concepts and get hands-on with Ruby, check out Educative's course Learn Ruby from Scratch. This introductory course offers tons of hands-on practice on all the need-to-know topics, including variables, built-in classes, objects, conditionals, blocks and much more!

By the end, you'll be a confident Ruby developer, ready to take on complex projects!

Once unpublished, this post will become invisible to the public and only accessible to Amanda Fawcett.