What is object-oriented programming?

The foundational OOP concepts are:

The following diagram illustrates the example of a birds class. Inheritance is what allows the derived classes to adopt the properties and functions from the base class. 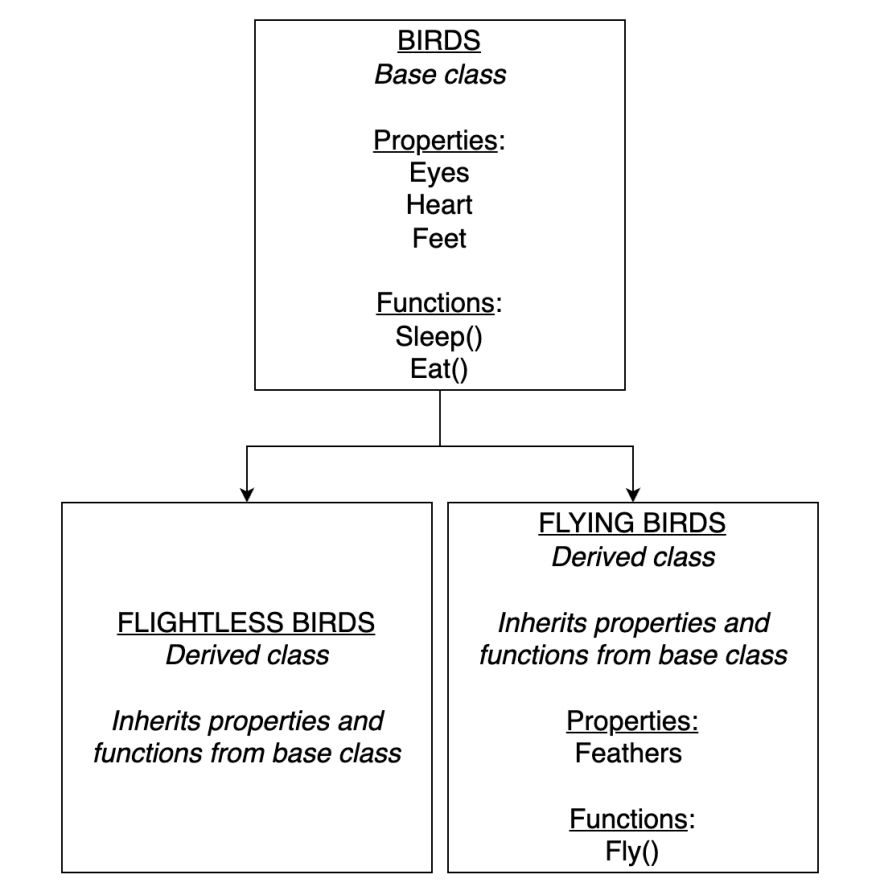 Another feature of object-oriented languages is that their syntax allows keywords to restrict and define access to classes, methods, and other members. These keywords are known as access specifiers (or access modifiers), which are essential to implementing encapsulation and abstraction.
The benefits of OOP are numerous. We can leverage OOP to develop applications with less code. Object-oriented programming helps reduce repetition in code, which reduces code complexity and data redundancy. It also increases the reusability of code. Users can create user-defined objects and classes which they can use in other applications.

Is C++ an object-oriented programming language?

While it can be considered an OOP language, C++ isn’t a pure object-oriented language. Some reasons for this are:

C++ offers the essentials necessary to implement object-oriented programming. It has classes and objects, access specifiers, and the OOP concepts of inheritance, encapsulation, abstraction, and polymorphism.

Classes are user-defined data types that form a blueprint for properties and functions. Objects are an instance of a class. Memory is allocated for objects, while classes don’t take up memory.

The syntax for class definition in C++ is:

The syntax for creating a class object in C++ is:

We can implement inheritance in C++ by creating a derived class to a base class.
The syntax in C++ code for this is:

Encapsulation in C++ is implemented through class and access specifiers.

Access specifiers in C++ help implement abstraction using classes in C++. Header files in C++ are another form of abstraction through which we can implement function calls and methods without needing to know the algorithms guiding a function.

There are two types of polymorphism in C++:

To help you get started with object-oriented programming in C++, Educative has created the C++ for Programmers learning path. This learning path consists of six modules. It covers the basics of C++ and progresses up to cover OOP techniques, data structures, C++ templates, and more.

Continue reading about C++ on Educative

Are you interested in learning OOP? What are your thoughts on the debate of C++ being an OOP language? Let us know in the comments below!