Modifying strings is an important programming skill. Concatenation involves appending one string to the end of another string.

For example, say we have two strings: "C programming" and "language". We can use concatenation to generate the output, "C programming language."

There are a few ways we can append or concatenate strings in C. This quick tutorial teaches you how to concentrate two strings using the strcat() function.

Today, we will go over:

A string is one of the most popular data types in programming. It is a collection of characters grouped together. Under the hood, strings are actually arrays of characters. Just like arrays, we can access string elements through indexing.

The C language can be slightly awkward when it comes to dealing with strings, especially compared to languages like Python. In C, a string is denoted with the help of a character array. A string can be declared with the syntax below.

Below, variable a is a character array where you can store up to 10 characters.

And it can be initialized as follows:

Let's put these concepts together with two examples.

In C, strings are always null-terminated. This means that the last element of the character array is a “null” character, abbreviated \0. When you declare a string as in line 8 above, the compiler does this for you.

We can use the sizeof() function to inspect our character string above to see how long it actually is:

In C, it is a bit tricky to modify a declared string.Once a a string is declared to be a given length, you cannot just make it longer or shorter by reassigning a new constant to the variable.

How to append one string to the end of another

The basic process is as follows: 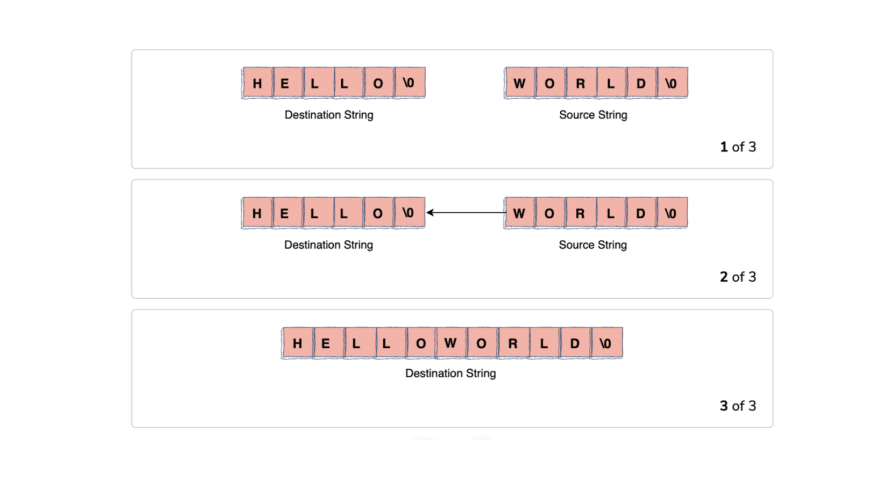 Let's look at an example. Below, the following code will concatenate two strings using the strcat() function:

In C, the destination array must be initialized before passing it to strcat. This means that it must have at least 1 location with a NULL character.

The strncat function is slightly different. We can use this to append at most n characters from a source string to a destination string. The example below appends the first 5 characters from src at the end of dest (i.e. starting from the NULL character). It then appends a NULL character in the end.

If the number of characters to copy exceeds the source string, strncat will stop appending when it encounters the NULL character, like below:

There is a lot more we can do with strings in C. Take a look at some of the common interview questions about strings to get a sense of what to learn:

Congrats! You should now have a solid idea of how to concatenate two strings in C. It's a simple process that is important to know for building your foundation. A good next step for your C journey is to learn the following:

To help you with your journey, Educative offers a free course called Learn C From Scratch. This comprehensive and detailed course will introduce you to all the basic and advanced programming concepts of C language.

Continue reading about C and strings

The Future of the IoT: the Internet of Behaviors