Haskell is a classic functional programming language making a resurgence in the 2020s. As the demand for data scientists grows, companies are looking for tools that can scale with big data volumes and maintain efficiency.

Haskell is perfect for the job with years of optimizations and features built especially for this kind of business data analysis.

What is functional programming?

Functional programming is a declarative programming paradigm used to create programs with a sequence of simple functions rather than statements.

While OOP programs excel at representing physical objects with unique traits, functional programs are purely mathematical and are used for complex mathematical computations or non-physical problems such as AI design or advanced equation models.

All functions in the functional paradigm must be:

Each function completes a single operation and can be composed in sequence to complete complex operations. For example, we might have one function that doubles an input number, doubleInput, another that divides the number by pi, divPi.

Either of these functions can be used individually or they can be strung together such that the output of doubleInput is the input of divPi. This quality makes pieces of a functional program highly modular because functions can be reused across the program and can be called, passed as parameters, or returned.

What is the Haskell programming language?

The Haskell language is built from the ground up for functional programming, with mandatory purity enforcement and immutable data throughout. It's mainly known for its lazy computation and memory safety that avoids memory management problems common in languages like C or C++.

It also has a more robust selection of data types than other statically typed languages like Java, featuring typing features like parametric polymorphism, class-based (ad-hoc) polymorphism, type families, and more.

Overall, Haskell compounds the performance and scalability advantages of functional programming with years of optimizations and unique tools.

Here's an example of how an imperative solution in Python would look as a declarative functional solution in Haskell:

Compared to the imperative program, the Haskell program has:

Uses the GHC Haskell compiler to compile directly to machine source code ahead of time. GHC is highly optimized and generates efficient executables to increase performance. It also has an interactive environment called GHCi that allows for expressions to be evaluated interactively. This feature is the key to Haskell's popularity for high input data analytics.

Has a static type system similar to Java that validates Haskell code within the environment. This lets you catch bugs during development earlier on. Haskell's great selection of types means you always have the perfect type for a given variable.

Enforces functional programming rules such as pure functions and immutable variables with error messages. This feature minimizes complexity in your program and ensures you're making the best use of its functional capabilities.

Defers computation until the results are needed. Haskell is well known for its optimized lazy evaluation capabilities that make refactoring and function composition easy.

Haskell makes concurrency easy with green threads (virtual threads) and async and stm libraries that give you all the tools you need to create concurrent programs without a hassle. Enforced pure functions add to the simplicity and sidestep many of the usual problems of concurrent programming.

Haskell has been open source for several decades at this point, meaning there are thousands of libraries available for every possible application. You can be certain that almost all the problems you encounter will have a library already made to solve them. Some popular additions are Stack, which builds and handles dependencies, and Cabal, which adds packaging and distribution functionality.

Now that you know why Haskell is still used today, let's explore some basic syntax. The two most central concepts of Haskell are types and functions.

Numeric types hold numerical values of different ranges and digit numbers, such as 15 or 1.17. Haskell has 3 common numeric types:

Here are some examples of more operations with numeric types.

Haskell uses type inference to assign the most logical data type for a given operation. As a result, we don't have to declare types if it is “obvious” such as Int vs. Double values.

To explicitly declare the data types, you can add designations after each value like so:

String types represent a sequence of characters that can form a word or short phrase. They're written in double quotes to distinguish them from other data types, like "string string".

Some essential string functions are:

Tuble types is a data type that contains two linked values of preset value. For example, (5, True) is a tuple containing the integer 5 and the boolean True. It has the tuple type (Int, Bool), representing values that contain first an Int value and second a Bool value.

Tuple construction is essentially a function that links two values such that they're treated as one.

To create your own functions, using the following definition:

After the definition, you enter an equation that defines the behavior of the function:

The function name echoes the name of the greater function, pattern acts as a placeholder that will be replaced by the input parameter, and expression outlines how that pattern is used.

Here's an example of both definition and equation for a function that will print a passed String twice.

Lists are a recursively defined sequence of elements. Like Linked Lists, each element points to the next element until the final element, which points to a special nill value to mark the end of the list.

All elements in a list must be the same data type defined using square brackets like [Int] or [String]. You then populate the list with a comma-separated series of values of that type. Once populated, all values are immutable in their current order.

Lists are useful to store data that you'll later need to loop through because they're easily usable with recursion.

Haskell also allows you to create your own data types similar to how we create functions. Each data type has a name and a set of expectations for what values are acceptable for that type.

To better understand this, take a look at the standard library's Bool type definition:

Custom data types are marked with the data keyword and are named Bool by the following item. The = marks the boundary between name and accepted values. Then False | True defines that any value of type Bool must be either true or false.

Similarly, we can define a custom Geometry data type that accepts 3 forms of shapes, each with different input requirements.

Our Geometry data type allows for the creation of three different shapes: rectangles, squares, and circles.

When creating a Geometry value, you must declare which constructor, Rectangle, Square and Circle, you wish to use for your input. For example:

A type class is a collection of types that share a common property. For example, the type class Show is the class of all types that can be transformed into a string using the show function (note the difference in capitalization). Its syntax is:

All type class declarations start with the class keyword, a name (Show) and a type variable (a). The where keyword sets a conditional that calls for all types where the following statement equates as True. In this case, Show looks for all types with a show function that takes a variable and returns a String.

In other words, every type a that belongs to the Show type class must support the show function. Type classes behave similarly to interfaces of object-oriented programming languages as they define a blueprint for a group of data.

Transition to Haskell and start working in analytics in half the time. Educative's hands-on text courses let you practice as you learn, without lengthy tutorial videos. You'll even get a certificate of your expertise to share with your employer.

You can use higher-order functions to combine your modular functions to complete complex operations. This is an essential part of function composition, where the output of one function serves as the input for the next function.

The function applyTwice takes a function of integers as its first argument and applies it twice to its second argument.

The parentheses clarify that the first Int set should be read together to mean an Int function rather than two independent Int values.

Now we'll create some sample functions double and next to pass to our higher-order function applyTwice.

Our implementation of applyTwice above is effective if we want to use double and next more than once. But what if this is the only time we'll need this behavior? We don't want to create an entire function for one use.

For example, we can convert our next function into a lambda expression:

Lambda expressions always begin with a backslash (\) and then list a placeholder for whatever is input to the function, x. Then there is an arrow function to mark the beginning of the expression. The expression uses the input parameter wherever x is called.

Functional languages like Haskell do not have loops or conditional statements like imperative languages. They instead use recursion to create repeated behaviors. This is because recursive structures are declarative, like functional programming, and therefore are a better fit.

Reminder: recursive functions are functions that call themselves repeatedly until a designated program state is reached.

Here's an example of a recursive function in Haskell:

Take a look at how this recursive function evaluates over each recursive step: 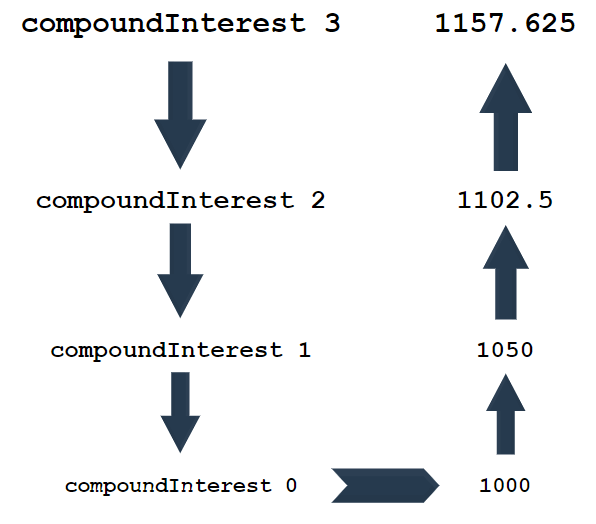 However, Haskell minimizes the severity of this problem by requiring pure functions and using lazy evaluation to avoid issues with the execution order.

Congratulations on taking your first steps to learn Haskell! While it can be challenging to move from an imperative/general-purpose language like JavaScript, Perl, or PHP to Haskell, there are decades of learning materials available to help you.

Some concepts you'll want to learn next are:

To help you pick up all these important Haskell concepts, Educative has created the course, Learn Functional Programming in Haskell. This helps solidify your Haskell fundamentals with hands-on practice. It even includes several mini-projects along the way to make sure you have everything you need to apply your knowledge.

By the end, you’ll have a new paradigm under your belt, and you can start using functional programming in your own projects.