This language was created and adopted by Google but has been gaining popularity in other companies in recent years as the demand for concurrent, networked programs is increasing.

Whether you're preparing for a Google job interview or just want to remain a cutting edge developer, Go is the right choice for you. Today, we'll help you practice your Go skills with 50 of the most important Go questions and answers.

Learn Go in half the time

Go is known for its concurrency capabilities. Stand out from the crowd with hands-on experience using the latest Go concurrency techniques.

1. What are the benefits of using Go compared to other languages?

2. What are string literals?

3. What data types does Golang use?

4. What are packages in a Go program?

Packages (pkg) are directories within your Go workspace that contain Go source files or other packages. Every function, variable, and type from your source files are stored in the linked package. Every Go source file belongs to a package, which is declared at the top of the file using:

You can import and export packages to reuse exported functions or types using:

Golang's standard package is fmt, which contains formatting and printing functionalities like Println().

5. What form of type conversion does Go support? Convert an integer to a float.

A goroutine is a function or method that executes concurrently alongside any other goroutines using a special goroutine thread. Goroutine threads are more lightweight than standard threads, with most Golang programs using thousands of goroutines at once.

To create a goroutine, add the go keyword before the function declaration.

You can stop a goroutine by sending it a signal channel. Goroutines can only respond to signals if told to check, so you'll need to include checks in logical places such as at the top of your for loop.

7. How do you check a variable type at runtime?

The Type Switch is the best way to check a variable's type at runtime. The Type Switch evaluates variables by type rather than value. Each Switch contains at least one case, which acts as a conditional statement, and a default case, which executes if none of the cases are true.

For example, you could create a Type Switch that checks if interface value i contains the type int or string:

8. How do you concatenate strings?

The easiest way to concatenate strings is to use the concatenation operator (+), which allows you to add strings as you would numerical values.

9. Explain the steps of testing with Golang.

You then place the testing suite file in the same package as the file you wish to test. The test file will be skipped on regular execution but will run when you enter the go test command.

10. What are function closures?

Function closures is a function value that references variables from outside its body. The function may access and assign values to the referenced variables.

For example: adder() returns a closure, which is each bound to its own referenced sum variable.

11. How do we perform inheritance with Golang?

This is a bit of a trick question: there is no inheritance in Golang because it does not support classes.

However, you can mimic inheritance behavior using composition to use an existing struct object to define a starting behavior of a new object. Once the new object is created, functionality can be extended beyond the original struct.

The Animal struct contains Eat(), Sleep(), and Run() functions. These functions are embedded into the child struct Dog by simply listing the struct at the top of the implementation of Dog.

12. Explain Go interfaces. What are they and how do they work?

Interfaces are a special type in Go that define a set of method signatures but do not provide implementations. Values of type
interface can hold any value that implements those methods.

Interfaces essentially act as placeholders for methods that will have multiple implementations based on what object is using them.

For example, you could implement a geometry interface that defines that all shapes that use this interface must have an implementation of area() and perim().

13. What are Lvalue and Rvalue in Golang?

14. What are the looping constructs in Go?

Go has only one looping construct: the for loop. The for loop has 3 components separated by semicolons: 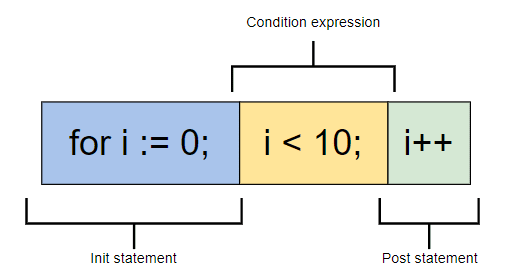 15. Can you return multiple values from a function?

Yes. A Go function can return multiple values, each separated by commas in the return statement.

Hands-on practice is essential to learning Golang.
Educative's text-based courses feature live coding environments and professional Go developer tips to help you pick up the language in half the time.

You can implement a stack using a slice object.

First, we use the built-in append() function to implement the append behavior. Then we use len(stack)-1 to select the top of the stack and print.

For pop, we set the new length of the stack to the position of the printed top value, len(stack)-1.

17. Print all permutations of a slice characters or string

Implement the perm() function that accepts a slice or string and prints all possible combinations of characters.

We use rune types to handle both slices and strings. Runes are Unicode code points and can therefore parse strings and slices equally.

18. Swap the values of two variables without a temporary variable

Implement swap() which swaps the value of two variables without using a third variable.

While this may be tricky in other languages, Go makes it easy.

We can simply include the statement b, a = a, b, what data the variable references without engaging with either value.

By default, Go only supports min and max for floats using math.min and math.max. You'll have to create your own implementations to make it work for integers.

20. Reverse the order of a slice

Implement function reverse that takes a slice of integers and reverses the slice in place without using a temporary slice.

Our for loop swaps the values of each element in the slice will slide from left to right. Eventually, all elements will be reversed.

21. What is the easiest way to check if a slice is empty?

Create a program that checks if a slice is empty. Find the simplest solution.

The easiest way to check if a slice is empty is to use the built-in len() function, which returns the length of a slice. If len(slice) == 0, then you know the slice is empty.

22. Format a string without printing it

Find the easiest way to format a string with variables without printing the value.

23. Explain the difference between concurrent and parallelism in Golang

Parallelism can therefore be a means to achieve the property of concurrency, but it is just one of many means available to you.

The key tools for concurrency in Golang are goroutines and channels. Goroutines are concurrent lightweight threads while channels allow goroutines to communicate with each other during execution.

You can use this sequential Merge Sort implementation as a starting point:

Firstly, in merge sort, we keep dividing our array recursively into the right side and the left side and call the MergeSort function on both sides from line 30 to line 34.

Now we have to make sure that Merge(left,right) is executed after we get return values from both the recursive calls, i.e. both the left and right must be updated before Merge(left,right) can be executable. Hence, we introduce a channel of type bool on line 26 and send true on it as soon as left = MergeSort(data[:mid]) is executed (line 32).

Implement the SumOfSquares function which takes an integer, c and returns the sum of all squares between 1 and c. You'll need to use select statements, goroutines, and channels.

You can use the following code as a starting point:

Take a look at our SumOfSquares function. First, on line 4, we declare a variable y and then jump to the For-Select loop. We have two cases in our select statements:

29. What is the purpose of a GOPATH environment variable?

31. What types of pointers does Go have?

33. Does Go have exceptions? How does Go handle errors?

34. When would you use a break statement in Go?

35. How do untyped constants interact with Go's typing system?

37. What is the difference between C arrays and Go slices?

40. How do you implement command-line arguments in Go?

41. How does Go handle dependencies?

42. What is a unique benefit of Go's compiler?

44. Name one Go feature that would be helpful for DevOps.

45. What does GOROOT point to?

48. What does it mean when people say Go has a "rich standard library"?

49. What is an advantage of Go evaluating implicit types at compile time?

50. Describe the crypto capabilities of Go.

Great job on those practice questions! Go is a rising language and hands-on practice like this is the key to picking it up fast. To best prepare for interviews, you'll want to:

To help you learn even faster, Educative has created Mastering Concurrency in Go. This course includes in-depth explanations and practice projects to show you how to get the most out of Go's awesome concurrency capabilities.

By the end of the course, you'll have the practical Go experience you'll need to pick up this language in half the time.

Finding what matters to you

Everything You Need to Know to Succeed as a Freelancer