While you can write Python with just a simple text editor, using a code editor or IDE with additional tools can skyrocket your productivity. However, it can be difficult to know which one is right for you: What features are important? Which is best for your particular use case? Are paid CEs or IDEs worth it?

Today, we'll answer all of these questions and more with an exploration of the top 10 Python editors and IDEs for 2021.

Learn Python in half the time

Transition to Python fast using hands-on practice and career-focused lessons. By the end, you'll have the advanced knowledge to confidently use Python in your next project.

What makes a good Python IDE or code editor?

Integrated Development Environments (IDEs) is software that bundles all the tools you use for writing and testing their programs, all wrapped in a neat toolkit. Each IDE includes different tools, but each includes a text editor to write code, build tools for automatic compiling, and a debugger that points out potential errors.

Specialized IDEs can contain much more advanced tools as well, such as visual coding support and AI integration.

Features you need for a Python IDE or CE

The main trade-off when choosing an IDE or CE is customization vs setup time. The following lists are ordered from least to most customizable. 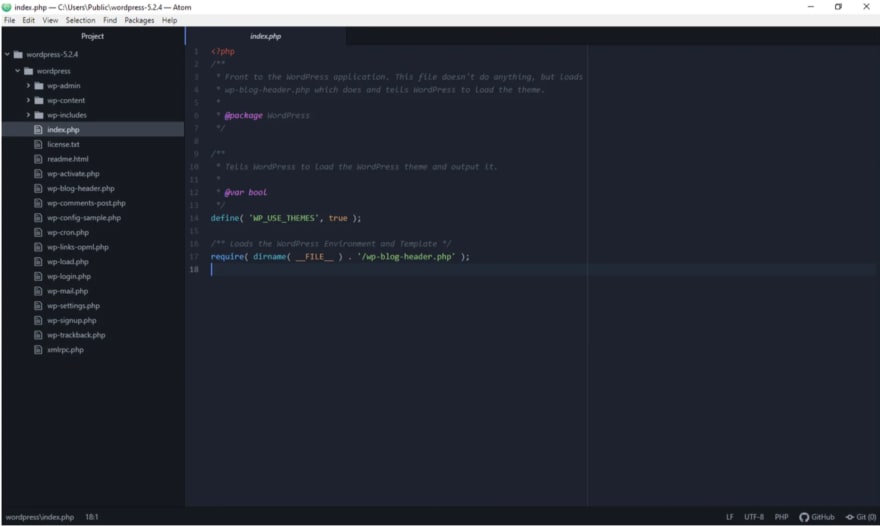 Atom is a more out-of-the-box ready open-source CE that strikes a balance between Sublime's performance/customization and a short setup time. Atom has a sleek look and is powered by Electron front-end framework, a tool for building desktop apps using JS, CSS, and HTML.

Atom has built-in support for beloved features like automatic code completion and find/replace. It is made by Github and can be easily integrated with Github and Git using built-in tools.

Atom features user plugins but allows you to quickly pick and integrate them hassle-free via Atom's free package marketplace. This marketplace lets you browse the most popular plugins to expand or fine-tune Atom to your needs.

Atom's main downside is that it is unpolished compared to other CEs. It has seen substantial updates since launch but still crashes occasionally. Unfortunately, updates have noticeably slowed since Microsoft acquired Github in 2018.

You're a multi-language developer who wants a free CE with extensive customization but doesn't want to spend too much time fine-tuning it. 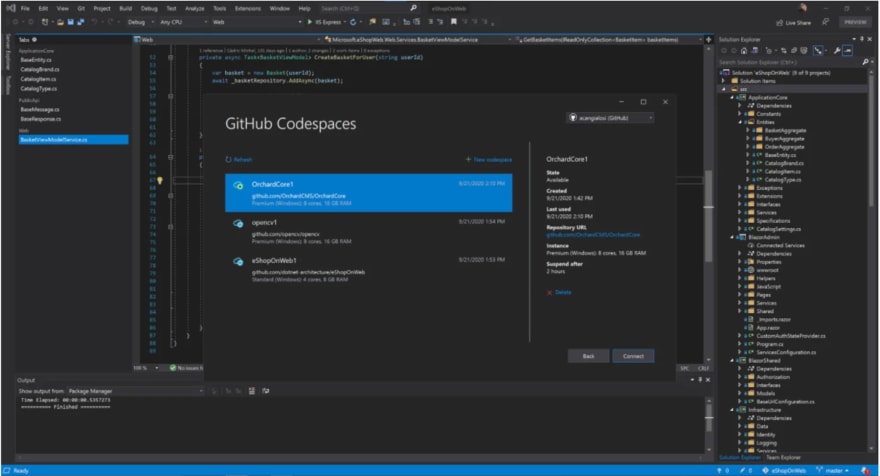 Developed by Microsoft and released in May of 2020, Codespaces is a new cloud-based cross-platform CE usable entirely in your browser. It includes a browser-based text editor and support for Git repositories, extensions, and a built-in command-line interface. It is even usable offline and will update once an internet connection is reestablished.

Codespaces can either be launched directly from Github or through a local install of Visual Studio. Codespaces is currently free but will include a paid option in the future.

Codespaces browser-based approach allows you to work from anywhere on any internet capable device. This makes it excellent for team projects because you no longer need to have a shared tool or pass around file copies.

The biggest downside of Codespaces is that it is new and unrefined. As with any new product, you could easily find a bug that doesn't have a fix yet.

You're a developer that often works on collaborative projects or contributes to open-source projects and don't mind limited customization options.

Visual Studio is a general IDE that supports Python through a plugin called Python Tools for Visual Studio (PTVS). Visual Studio has extensive features, with built-in support for Git, a built-in terminal, comprehensive unit test tools. It also has an extension marketplace similar to Atom.

Visual Studio also comes with Intellisense, widely considered to be one of the best autocompletion systems available to developers today. You can also add plugins to allow support for web dev tools like Flask or Django.

The download is quite large but is worth it if you use it for multiple languages. There is a free version (Community) and paid versions (Business/Enterprise) that offer extra perks like customer support and DevOps tools.

You're a dedicated developer who changes languages regularly, wants to learn one tool for all your programming needs, and aren't too interested in visual customizations. 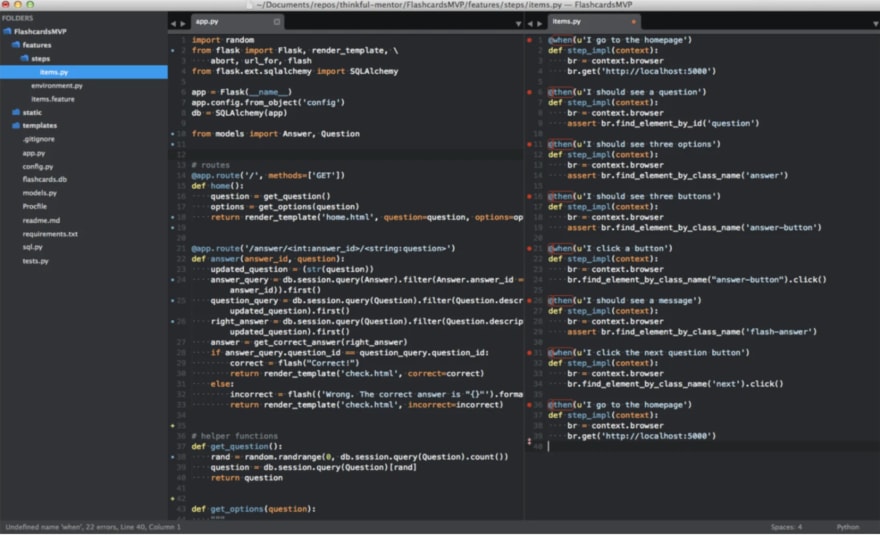 Sublime Text is a highly responsive code editor used by thousands of developers. Sublime text supports multiple versions of Python and allows you to set your version for each project.

Sublime is nearly unbeatable in speed, with all but the largest files opening instantly. Sublime's other call to fame is its extreme customization through user-built plug-in packages.

These plugins let you change nearly anything about the code editor, from appearance to error finding, code completion, additional language support, and more. More plugins are added each day, meaning Sublime is potentially one of the most updated tools available.

The main downside of Sublime is its $80 cost.

You're a long time coder who wants a customizable but lightweight tool for all your favorite programming languages and are not afraid to take time to set it up. 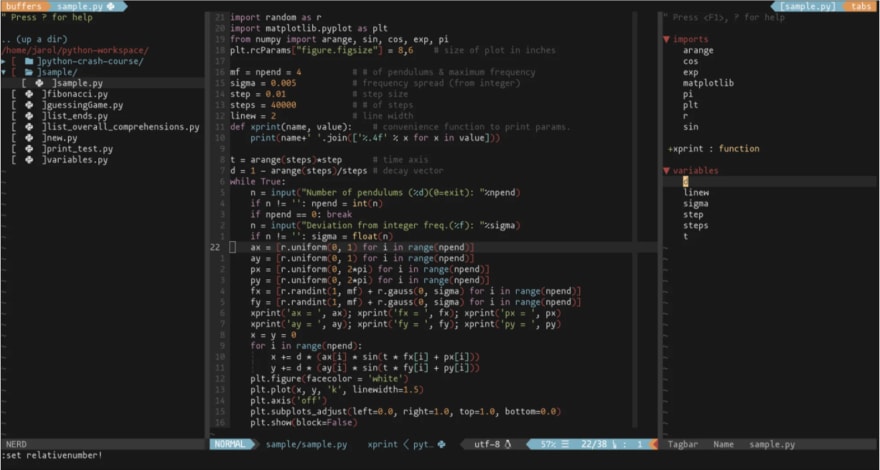 Vim is a classic code editor built as the successor to VI. It comes readily installed in Mac OS and Linux but is also available for download on Windows. It's known for a steep learning curve but serious payoffs. It's still readily updated but rarely sees stark changes.

Vim has nearly no UI by default and is operated entirely by the keyboard. This means you can use VIMscripts to customize anything in the tool from appearance to custom keyboard shortcuts. This marks Vim as potentially the most customizable and efficient CE once you've mastered it.

While efficient once learned, exclusive keyboard control is a tough transition to make if you're not coming from VI. The VIMscript customizations are equally difficult to pick up as they require that you complete a coding project before you even start!

You're already used to VI and keyboard controls or want the most customizable and efficient editor regardless of the learning curve. 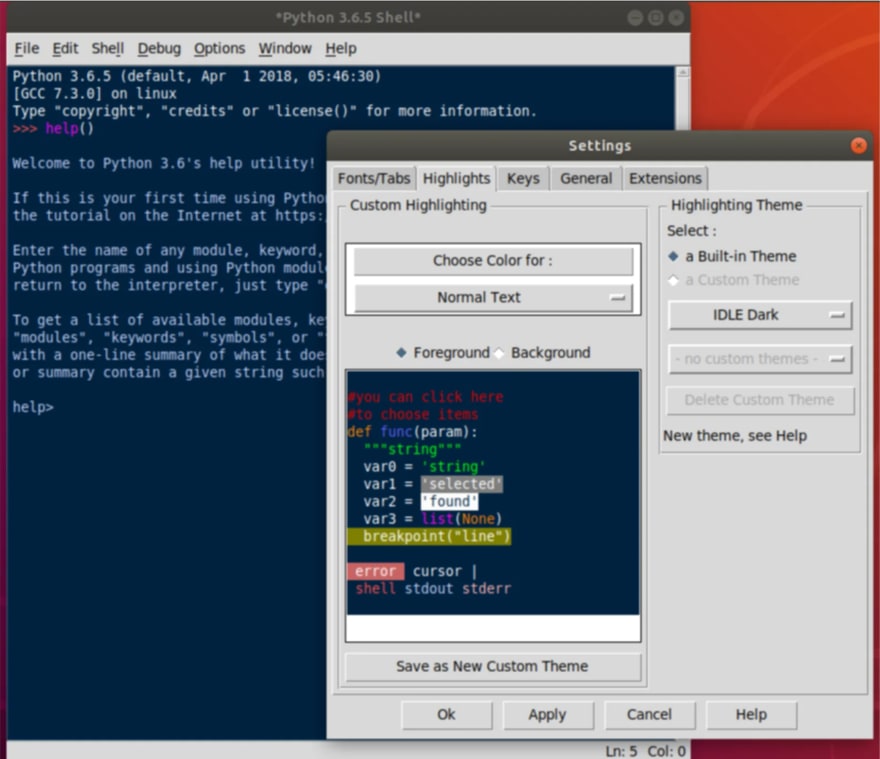 IDLE is the default IDE installed with Python. It includes all the core features like a Python shell window, autocompletion, highlighting, smart indentation, and a basic debug tool.

IDLE is a limited IDE designed for learners. It's lightweight and doesn't include much customization to avoid overwhelming new users. However, once you get to larger projects you'll find IDLE's performance and organization tools start to show their faults.

IDLE also does not have plugin support, meaning you can't expand it to meet your needs.

You're new to Python development and want to practice basic projects without setting anything up. 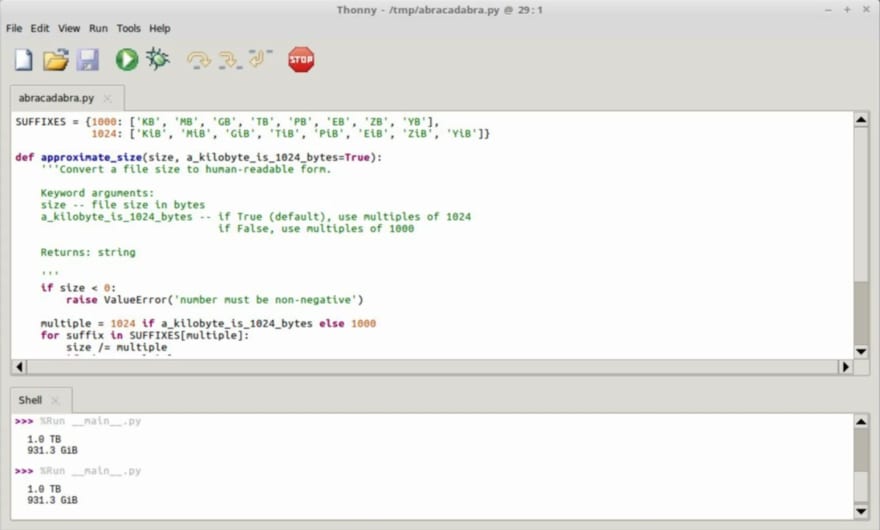 Thonny is a free Python IDE designed as the ideal environment for beginners. The UI is simple and comes with highlighting, autocompletion, debugging, and auto-formatting built-in.

IT also has unique features for beginners like a variable value tracker displayed next to the main editor. All options are set with menus rather than config files to allow beginner developers to focus on their coding. Even plugin installation is optimized for beginners with a simple package manager.

The downside of Thonny is that it does not have the advanced features of IDEs like PyCharm or the specialized tools for specific applications available for Spyder. As a result, you'll eventually have to transition to another IDE once your programs become more complicated.

You're a newer Python developer that wants more features than is offered by IDLE but don't want to jump to a more involved IDE yet. 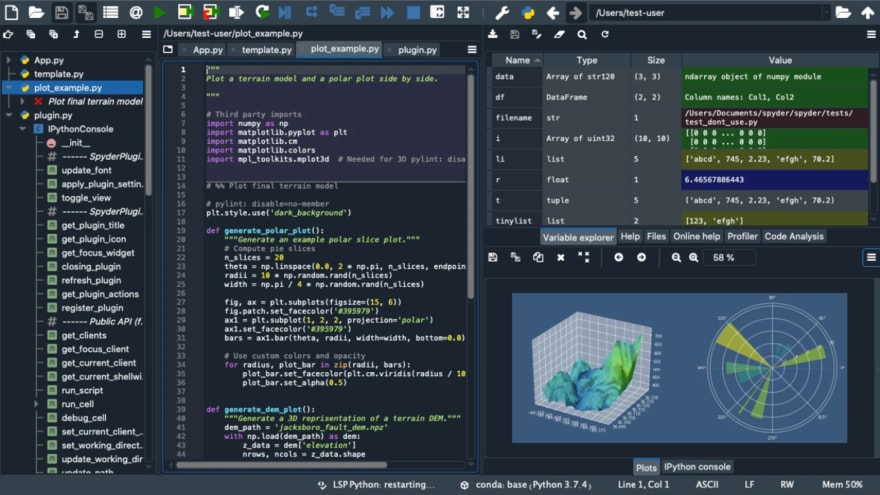 Spyder is a Python-specific IDE designed for data scientists and ML engineers. It's included with the Anaconda distribution that includes other popular Python libraries like Scikit-learn, Numpy, Matplotlib, Scipy, and Pandas.

It includes great features like autocompletion, a powerful debugger, iPython shell, and limited data visualization tools. Spyder is specifically optimized for data science and therefore interfaces perfectly with all the top tools.

Spyder has fewer features than extensive IDEs like PyDev and rather focuses on providing a straightforward, easy to use tool for non-developers.

You use Python solely for data science or machine learning and want an IDE with tools tailored to your coding needs. 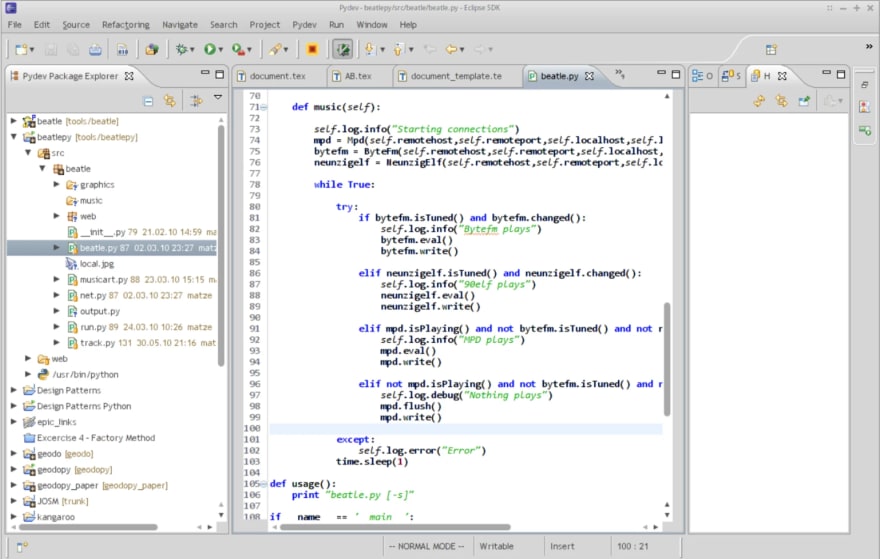 PyDev is an open-source IDE plugin available for Eclipse, a popular Java IDE for open source development. PyDev comes with all of Eclipse's built-in control and adds support for Python autocompletion, an interactive console, and debugging.

It is also integrated with Django with many tools suited for web development. It is one of the few IDEs that include support for Jython and Cython.

While not as featured or customizable as other Python IDEs, PyDev lets those already familiar with Eclipse get started in a fraction of the time it would take to learn a new tool. Those inexperienced with Eclipse will have a noticeable learning curve.

You use Python as a secondary language for web development or open-source contributions and have some experience with Eclipse already. 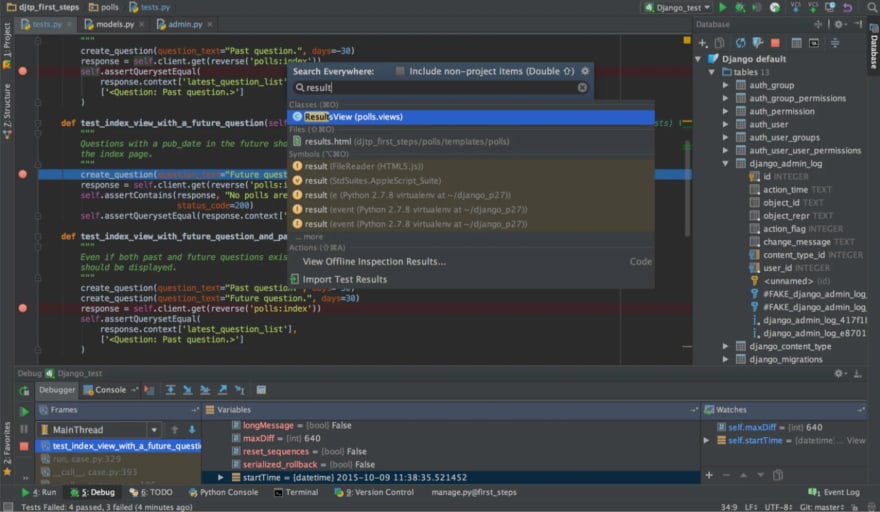 PyCharm is one of the most popular cross-platform IDEs for Python, developed and regularly updated by the trusted JetBrains company.

PyCharm comes out of the box with all the best tools like version control, autocompletion, error-highlighting, code refactoring and more. Unlike other IDEs, you can start coding with PyCharm the moment it's done loading.

The code suggestions especially are widely regarded as some the most helpful compared to competing IDEs.

PyCharm's main trade-off is price and program weight. PyCharm's free option is lightweight and optimized for data science but the paid option ($100-200 per year) includes tools for web dev and other Python applications.
Also, PyCharm is a heavy download that uses a lot of VRAM to function. Old machines will therefore struggle to make use of PyCharm.

You're a Python developer that's willing to pay for access to the best tools immediately without setup or installing plugins.

Now that you've found your ideal environment, it's time to start coding! The best way to practice your Python skills is with hands-on tutorials and projects.

To help you pick up Python fast, Educative has created the Python for Programmers Path. This Path is filled with the best practice content from across our course library. You'll learn Python fundamentals, OOPs designs, and advanced concepts like SQL integration, asyncho, and web API implementation.

By the end, you'll have all the real-life experience to ace your next Python interview!

How to add Flutter to Android App