The JWT Token concepts were explained in the previous article, so if you want to find more before continuing reading this article, check out the introduction of the previous one: https://stefanescueduard.github.io/2020/04/11/jwt-authentication-with-symmetric-encryption-in-asp-dotnet-core/#Introduction.
Asymmetric Encryption is based on two keys, a public key, and a private key. The public key is used to validate, in this case, the JWT Token. And the private key is used to sign the Token. Maybe the previous statement is a little bit fuzzy, but I hope that will make sense in a moment.

To generate certificates I chose to use the OpenSSL toolkit. If you are on Windows, OpenSSL can be downloaded as an executable and installed where ever you want. I recommend being installed on the C:\ root.
OpenSSL download link: https://slproweb.com/products/Win32OpenSSL.html
The tool has to be used from the Terminal, so there are two choices:

To add the tool as an environment variable the following entry has to be inserted into the User variables:

After configuring OpenSSL, the private and public key have to be generated using the following commands:

The Setup is the same as in the previous article, so check it out here: https://stefanescueduard.github.io/2020/04/11/jwt-authentication-with-symmetric-encryption-in-asp-dotnet-core/#Setup. TL;DR you have to install the following package: Microsoft.AspNetCore.Authentication.JwtBearer.

After the Authentication service was added, in the Configure method the Authorization and Authentication middleware needs to be added to the pipeline.

In this class, the RSA class is used to create a RsaSecurityKey with the public key generated before.

FromXmlString initializes the rsa object with parameters from the XML files.
If we dig down in this method - https://git.io/JvbVm - we can see that the RSAParameters are the same as they are in the XML file converted before.

The rsa is created on the constructor, this object must be disposed because there might be some resources that will run after the process ends.

SigningAudienceCertificate is very similar to the SigningIssuerCertificate, the only differences are that, is using the private key to initialize the rsa object and is returning SigningCredentials constructed with the RsaSecurityKey and the SecurityAlgorithms. For this, the RsaSha256 algorithm is used because is the most recommended one. If you want to find what algorithm to use for each type of encryption, check out this article: https://auth0.com/blog/json-web-token-signing-algorithms-overview/.

This service is used by the AuthenticationController to authenticate the user. It is like a middleware because it's using the UserService to validate the received UserCredentials and the TokenService to generate the JWT Token if the credentials were valid.

TokenService initializes on the constructor the SigningAudienceCertificate class created before. With this object, the SigningCredentials for the TokenDescriptor will be created.

GetTokenDescriptor method creates a token with the minimum required properties: Expires and SigningCredentials. Also, the Expires property here is used because on the Authentication method the LifetimeValidator was set, but it doesn't need to be specified.
All SecurityTokenDescriptor properties can be found on the Microsoft website: https://docs.microsoft.com/en-us/dotnet/api/microsoft.identitymodel.tokens.securitytokendescriptor.
The GetAudienceSigningKey method created before is used to generate the Token SigningCredentials, to validate that the Token was signed with the same private key from which the public key was generated.

Firstly the Authentication happy flow will be tested, so the combination of the username and password will match and the endpoint should provide the generated Token.

And secondly let's test the unauthorized flow, where the provided credentials are wrong. 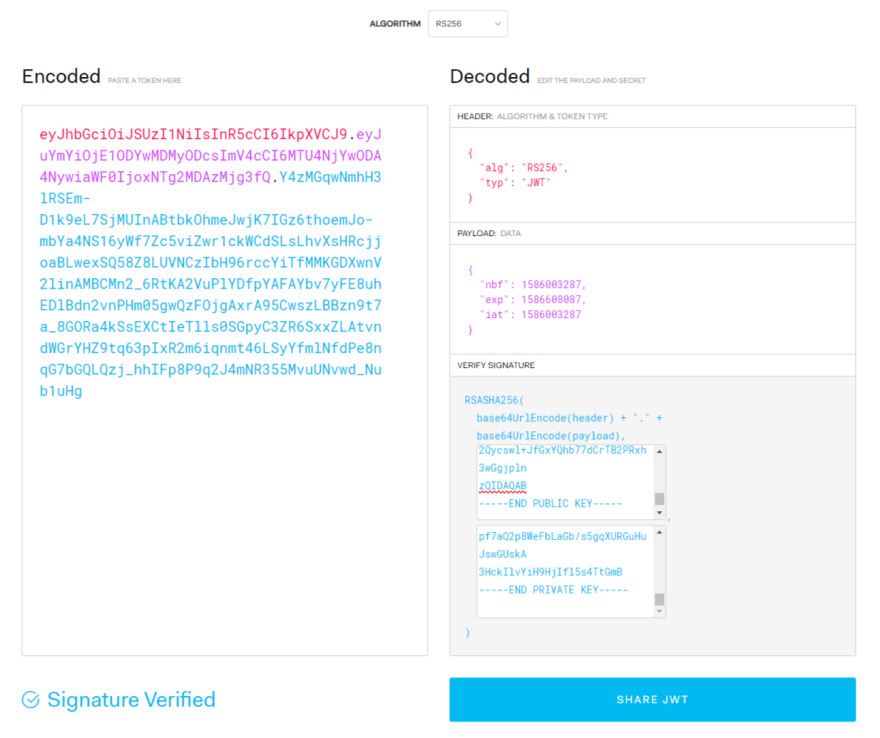 On the Verify Signature section, both keys must be entered to validate the signature of the certificate.
Now the ValidationController will be used to check whether the token is valid or not, but this will happen internally, on the Authorize attribute. Firstly, the happy flow.

And in the second test, the wrong token is validated.

The source code from this article can be found on my GitHub account: https://github.com/StefanescuEduard/JwtAuthentication.

Thanks for reading this article, if you find it interesting please share it with your colleagues and friends. Or if you find something that can be improved please let me know.

Once suspended, eduardstefanescu will not be able to comment or publish posts until their suspension is removed.

Once unsuspended, eduardstefanescu will be able to comment and publish posts again.

Once unpublished, all posts by eduardstefanescu will become hidden and only accessible to themselves.

If eduardstefanescu is not suspended, they can still re-publish their posts from their dashboard.

Once unpublished, this post will become invisible to the public and only accessible to Eduard Stefanescu.

Thanks for keeping DEV Community safe. Here is what you can do to flag eduardstefanescu:

Unflagging eduardstefanescu will restore default visibility to their posts.