I have been known to complain about how slow and painful to debug SpringBoot integration tests can be. Recently, however, I have found an alternative! 😁 A way to reclaim confidence in integration testing, without sacrificing the speed and debug-ability of unit tests.

For the most part, unit tests offer a great alternative to integration tests but sometimes they are not enough. Often it's still important to have a small number of tests that test how your system fits together. For me, sociable unit tests fill this role.

Integration tests (Such as Spring Boot tests) give confidence that your system hangs together, that you can wire all your dependencies and that your @Controllers are configured to expose your endpoints properly. But for all that, they are just too slow when it gets to testing your logic to any considerable degree. I want tests that run in milliseconds.. not seconds. Especially when I'm talking about running 1000s of tests.

This is where sociable unit tests come in.

Sociable Unit Tests are an attempt at a happy medium between unit tests and integration tests. They attempt to test a larger portion of the system than unit tests. Where possible, we want to avoid mocks and restrict mocking to things that would make our tests slow, brittle or non-deterministic (like API or database calls).

Solitary unit tests isolate themselves with mocks. Sociable unit tests try not to.

What are we after?

We just want our tests to be:

What can I do?

Let's take a look at a few things that can help push our tests in this direction.

So what about these Sociable Unit Tests then? 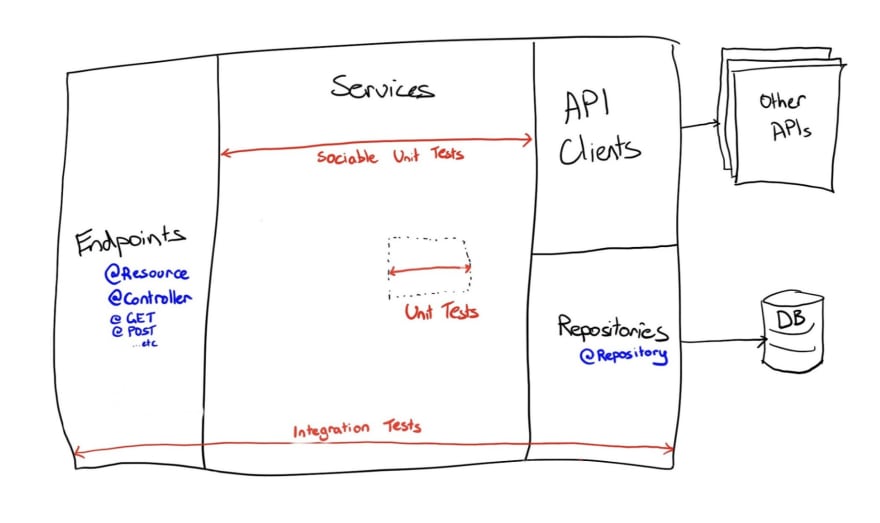 This image illustrates the different types of Microservice tests. Sociable Unit Tests are Unit tests that may encompass the same amount of business logic as an integration test without the pain of also testing the network and framework! 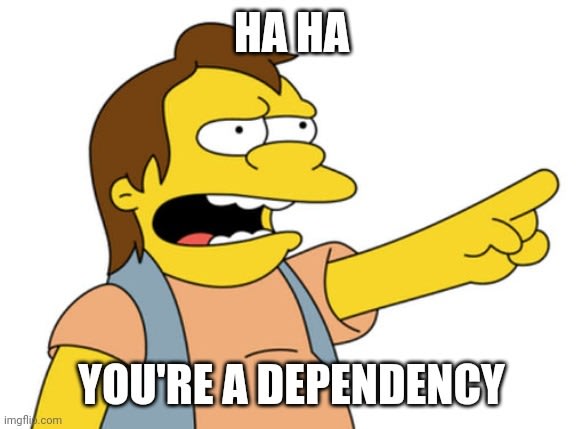 Don't mock your dependencies. It's rude.

Show me a f$@%ing example

The ProductService has a PricingEngine which it delegates, to calculate the price.

Let's take a look at how we'd test it in both approaches (solitary and sociable).

You will probably recognise the following approach to testing as it has become one of the most popular in recent years. To isolate our system-under-test, we will mock its dependencies, like so:

But if we think about it, the only thing this is testing is that we call a specific method on the engine.

If we refactor ProductService to call a different (but equivalent) method, our test would fail. Now not all mock-heavy tests are this terrible but it happens far too often.

Wouldn't it be great if our test continued to pass, so we could prove we haven't broken anything?!

The core thing we want to test is that we can get a price for a given product.. so let's give it another go with that in mind!

That's it! A much simpler test.. and it's less sensitive to breakages from structure changes. In fact, in this case, we mostly just removed code.

What if we now add the requirement for our price to include a discount based on the customer?

For a "solitary"-style unit test, to test this requirement, we need to create a customer, pass it to the getPriceFor method... as well as pass the discount into every reference to the PricingEngine#calculatePrice method.

However, with a sociable unit test we only test the public methods of ProductService so don't care how PricingEngine is used. This makes the change much simpler.

We can see from the above that the required change is just:

Even better, if ProductService already had the info it needed to pass to PricingEngine, the test wouldn't even need updating.
On a suite of hundreds or thousands of tests, the effect sociable-style tests can have on refactoring is huge!

We'd want to add other tests or assertions for this new functionality but the simple act of using real dependencies in our tests puts us in a much better place from the start.

Sociable unit tests are an approach that works just as well for small scoped unit tests as it does for integration testing whole pieces of a microservice. Whilst you may still find the need to mock external dependencies such as APIs or slow, non-deterministic ones like a database or filesystem, attempting to use more real dependencies in your tests can have a huge impact on both the speed and usefulness of your tests.

Give it a go and let me know what you think!

Do you have a favorite keyboard ? [I bought the new pop keys KB from Logitech]

Are cover letters worth the time?

Once suspended, dylanwatsonsoftware will not be able to comment or publish posts until their suspension is removed.

Once unsuspended, dylanwatsonsoftware will be able to comment and publish posts again.

Once unpublished, all posts by dylanwatsonsoftware will become hidden and only accessible to themselves.

If dylanwatsonsoftware is not suspended, they can still re-publish their posts from their dashboard.

Once unpublished, this post will become invisible to the public and only accessible to Dylan Watson.

Thanks for keeping DEV Community safe. Here is what you can do to flag dylanwatsonsoftware:

Unflagging dylanwatsonsoftware will restore default visibility to their posts.