The flight was uneventful, until its final minutes. It started to go wrong when a pitot tube - an instrument for measuring airspeed - froze over, causing the autopilot to turn off. In retrospect, it's clear that the junior pilot, Bonin, flying at the time signalled his experience when he exclaimed "I'm in Take-Off Go Around, right?" at 37,500 feet above the Atlantic. The rest of the crew only realised when the Captain had returned to the flight deck and told the crew to pull up, and the pilot responded, "But I've been pulling up the whole time!". Bonin said, a few moment later, "But what's happening?" It was the last thing he said before AF-447 slammed into the ocean, killing everyone on board.

I'm a little worried about our industry, and it's not because we have inexperienced developers writing code. After all, Bonin was not exactly inexperienced as things go - he had 807 hours on the aircraft type at the time, and nearly 3,000 hours as a pilot.

No, what worries me is that Bonin had no experience in manually handling the aircraft at altitude, had done next to no manual flying of light aircraft in his career, and so predominately flew either take-off and landings or else was operating the aircraft via an autopilot. In other words, he had no experience of the fundamentals. This meant that his reaction to the aircraft losing 10,000 feet per minute was to pull back further and further - the plane was pointing up at 41.5 degrees.

I know plenty of really impressive developers who don't know any assembler, or who don't understand how virtual memory works. I'm seriously amazed by developers who don't understand the difference between a non-blocking and a blocking call, or who can't write their own event loop. It's not that anyone needs to write an event loop (even I don't, and I'm a systems programmer). I haven't touched ASM in at least a couple of decades, and I feel much better for it.

But when I started coding - yes, I'm being a grumpy old man, bear with me - one had to learn about these things because we really had no choice. My first "real" programming had to involve a bit of machine code out of necessity - that's entering hex codes directly, not even an assembler to be seen! When I started trying to do event-driven programming, I had to write an event loop myself because there were no libraries to do it for me. This isn't boasting; this is just me being in my mid-forties. If I were only a little older, then there would be no higher-level languages in my early years at all. Also, it were up hill both ways.

Most of the time, this misspent youth at the bottom end of the stack is of no use to me. But when things go wrong, a little understanding and experience of the underlying technologies gives me a really useful background. By way of illustration - and because of my bizarre fixation with air crashes - I'd like to present the story of Air Canada Flight 143, in 1983.

Flight 143 got into trouble due to a somewhat bizarre collection of events that left both a non-functional fuel gauge and insufficient fuel, yet a crew convinced that the aircraft was both fully fuelled and cleared to fly.

The Captain and First Officer of '143 were both insanely experienced - they had over 22,000 hours between them - and handled the situation with aplomb. Initially, they thought that a fuel pump had gone, and prepared to divert to Winnipeg. Next, they correctly guessed that the loud "bong" followed by complete loss of power meant that all the engines were out (due to fuel exhaustion) and deployed the wonderfully-named Ram Air Turbine, or "rat".

The First Officer, Quintal, then identified an old Royal Canadian Air Force base he'd once served at nearby. Once called RCAF Station Gimli, what Quintal didn't know was that it was by then known as Gimli Motorsports Park. Captain Pearson then proceeded to calmly glide a 767 to an unfamiliar airstrip.

Shortly before landing, the crew realised that they would have no flaps or slats to slow the aircraft, and they were coming in too high and too fast - Pearson carried out a gliding manouevre called a Forward Slip, and landed the aircraft safely - in the middle of a racing day. Take another look at that header photo: 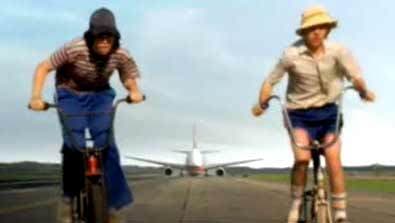 A ground crew team drove from Winnipeg to discover the state of the airframe. In the most ironic coincidence ever, their van ran out of fuel on the way.

Captain Pearson was never trained in how to glide a 767. Standard training didn't cover flying with all engines out, and the crew had never even heard the warning sound before, even in simulator training. However, he was an experienced light aircraft and glider pilot, and could reapply that experience to handle the situation.

Not only was nobody injured (10 people were injured in the evacuation subsequent to landing), and the aircraft was repaired and flew for another 25 years.

Fundamental knowledge is a valuable thing in emergencies - and lack of it can really hurt.

20 principles I learned from 10 years of developing software

The Broken Metric: Why Years of Experience is Meaningless in Software