Passwordless authentication is a broad term for any authentication method that doesn't rely on passwords. Implementations typically perform proof of identity based on something that is uniquely associated with a user, such as an e-mail address, a phone, a software one-time password (OTP) generator, or a hardware authentication device like a YubiKey: the user inputs the secret that the system shares with one of those methods, proving its ownership. A passwordless flow essentially skips the "what you know" factor of two-factor authentication. We're epistemological skeptics now.

Cognito is an infamous AWS service for identity management. It can do much for us: authentication, access control, and integration with external identity providers. A big advantage over competing solutions is that it integrates well with other AWS services, like AppSync.

In this post we'll look at how we can implement passwordless authentication using Cognito to satisfy our requirements, which aren't quite as described in this AWS blog post. We assume a passing familiarity with Cognito and AWS Lambda. The code examples are Lambda functions written in Go.

The app we're going to work on authenticates users according to the following UX: 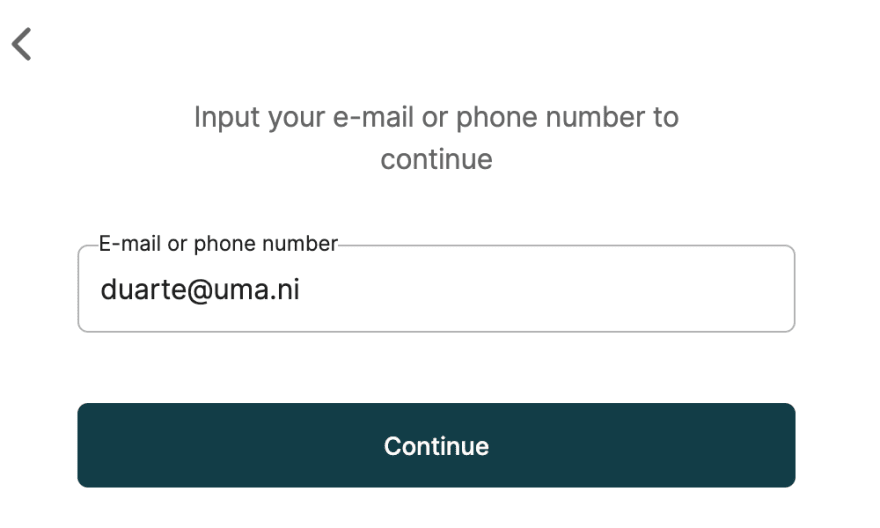 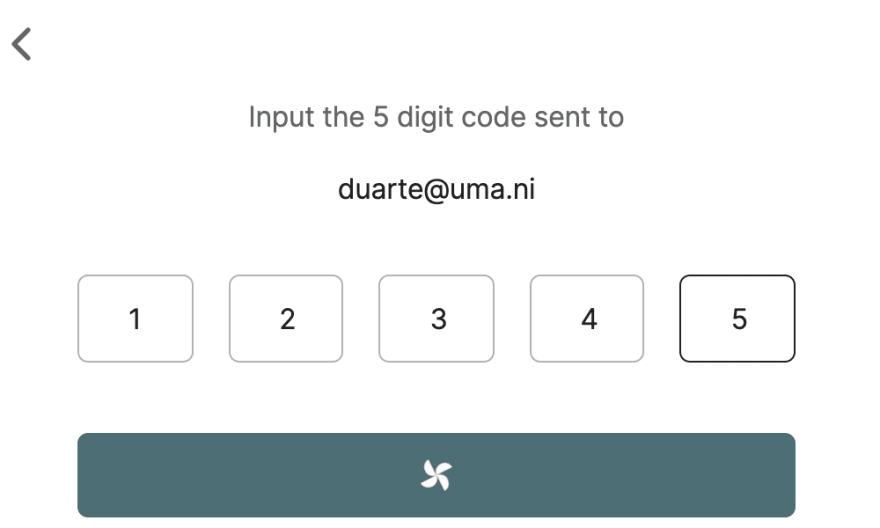 This is very convenient: users can sign-in using information they know by heart, without needing to use password managers or, worse, their memory (they don't even need to remember whether they've already signed-up).

These are our requirements:

What features does Cognito offer that help us meet these requirements? Let's find out.

Cognito doesn't have a built-in passwordless feature, but it supports a custom authentication flow implemented as a state machine based on three Lambda function triggers that we need to implement.

A custom authentication flow can be composed of many challenges. State is kept in an encrypted session object, which is initially returned by the InititateAuth API call, and then threaded back to Cognito when calling RespondToAuthChallenge. It expires after 3 minutes, which already allows us to tick off a requirement!

Our journey first tasks us with configuring a Cognito user pool in such a way that e-mails and phone numbers can be used as aliases. Thanks to the CDK, we don't have to confront the maze of darkness that is CloudFormation YAML:

This translates to a user pool that's part of a CloudFormation stack, which:

We also configure the user pool client to only authenticate users through the custom authentication flow, thus disallowing password-based authentication. Clients are allowed to refresh user tokens (tokens have a validity and need to be refreshed for the session to be extended without users having to go through the sign-in process again).

Verifying an email or phone number

How can we work around this? We could pass that information through a data store like DynamoDB, but a better solution is to leverage that ClientMetadata parameter. InititateAuth doesn't pass it to the Lambda, but RespondToAuthChallenge certainly does.

An RPC by any other name

These authentication challenges actually comprise a complete request-response protocol over which the client can communicate with the state machine. Clients can answer the challenges while passing along arbitrary data to the Lambdas, which can keep the protocol going as long as needed. With this in mind, we can solve the problem by using an extra challenge to specify what the actual method we're verifying is: 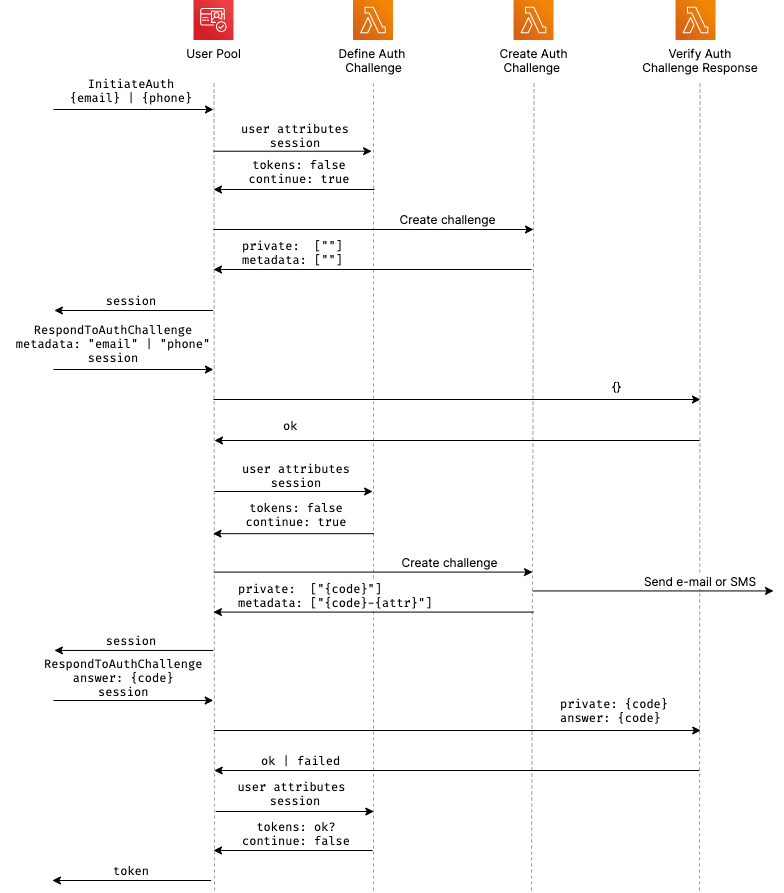 The first challenge delivers no code, and expects email or phone to be passed in the ClientMetadata. The second challenge is the actual OTP.

This custom authentication flow now behaves as a primitive that lets us validate a user attribute, namely an e-mail or phone number.

The verify auth challenge response Lambda has the easiest task:

If there is no code in the private challenge parameters it's because this is the first step of the protocol, in which case the answer is always accepted. Otherwise, we match the code against the user-provided answer.

The create auth challenge Lambda calculates and delivers the challenge. We encode a challenge as:

This challenge is persisted in the metadata shared between all Lambdas in the state machine and stored in the session object. The private challenge parameters are shared with the verify auth challenge response Lambda. If our challenge had public parameters, we would specify them here and they would be sent to the client (in plaintext).

We generate an empty code for the first challenge and an OTP for the second one. In the second challenge we expect the client metadata to contain the attribute type to verify (the type, not the value), which we use to select the the attribute value from the current user attributes, delivering the code by e-mail or SMS.3 The client essentially sends us a pointer to the actual attribute to verify.

If the previous challenge failed, that is, if the user introduced the wrong code, we reuse it.

The state machine keeps turning until we reach the maximum allowed failed attempts or the user provides us with the correct OTP. We tick off two requirements 🎉

Unfortunately, this isn't sufficient to support our authentication flow. Recall that we have no separate sign-up process, so we might not have a registered user for a run of this protocol. However, we need the attribute to verify to be present in the user attributes, which are only populated for existing users (also, Cognito doesn't issue tokens for users absent from the pool). We must ensure a user exists, even if a partial one.

Users aren't allowed to sign themselves up (to prevent using the SignUp API as a user-existence oracle), so we need something that does that on their behalf, say, a Lambda resolver for a GraphQL API on AppSync.

We can call the AdminCreateUser API to ensure the user exists, return to the client and let it handle the rest of the flow, but we'd be optimizing for the less common scenario of a user not existing in the pool.

Instead, we try to InititateAuth and if that fails, we issue the AdminCreateUser request. Does this mean we need to mediate all requests between the client and Cognito? No! We can take the session object returned by Cognito and return it to the client to be used in the RespondToAuthChallenge call.

Since we're already here though, we can even go ahead and execute the first step of the protocol, telling Cognito which attribute we want to verify:

The CreateUser function calls the AdminCreateUser API, generating a random username and password and marking the email or phone number attribute as verified so it can be used as an alias. 4 The InitiateAuth function calls Cognito's own InitiateAuth and then the first RespondToAuthChallenge. The rest is up to the client.

We encapsulate the AdminCreateUser API and behave the same regardless of the user existing before the request or not. Yep, another one down:

Uff. The user is signed-in. However, there's a chance the JWT token our client got back from Cognito contains only a single claim for either the user's email or phone number, and we need more! In that case, our UI proceeds to collect some user data: their name and the second authentication method.

We have another attribute to verify, so we need to run another instance of our protocol. Lets add a GraphQL resolver that writes the user data into Cognito by updating the user attributes.5

Note that we mark that second method as not verified, because Cognito only allows one user to have a given email or phone number marked as verified and thus use it as an alias 6. We want to avoid the following scenario:

Our system should consider a user as valid only when it has both attributes verified, but who marks the second method as such? That's a job for our define auth challenge Lambda:

Finally, note that this very same logic can be used to implement an API for changing a user's e-mail or phone number.

We're almost done, but there's one missing detail: Cognito isn't prepared for us modifying a user's attributes during the authentication process, so the token the client ends up with after the sign-up doesn't have the second attribute marked as verified. There's no clever solution here: we must call the InitiateAuth API using the REFRESH_TOKEN_AUTH flow instead of CUSTOM_AUTH.

We got them all.

Cognito isn't easy to work with and I find the client libraries and documentation to be somewhat lacking, but at the end of the say it's solving a huge problem on our behalf. It has enough flexibility to be subject to some unorthodox usage, and I hope it keeps on improving.

For this particular use case I missed some additional toggles, which could be added without loss of generality: it could flow the client metadata from InitiateAuth to the authentication Lambdas, and it could allow the define auth challenge Lambda to override some token claims, much like the pre-token generation Lambda can. Another easy improvement is allowing the custom auth Lambdas to return errors, which should be returned from the API calls (even if as some generic error). By contacting AWS support I was able to turn the first of these in a feature request, but of course, without any estimate when it will be available.

Open Api Spec 3 - All you need to know Series