In the past 2 years I found myself having to install and configure Puppeteer to capture webpage screenshots on so many occasions.

So I thought it would be great to have a generic API that captures webpage screenshots that I can reuse across multiple projects. The existence of serverless platforms like Vercel made it all the more easier to do this, even for personal projects.

The need for screenshotting web pages

In each of these use cases I installed Puppeteer and wrote similar code: Go to the web page, take a screenshot, output the image. But Puppeteer is quite a heavy dependency, weighting over 100 MB in node_modules.

In cases where the code is used in dynamic sites, I would had to set up a Google Cloud function or an AWS Lambda function for that use cases.

Wouldn’t it be great if, instead of setting up Puppeteer every time, there is an API that I can immediately use? Well, there is a plenty of offerings, but most of them are paid and the free ones went down. Even some of the paid ones went down (the links that are struck out are now dead).

Since I wanted to re-use it across multiple projects, spanning multiple years to come, I want some degree of control. The service should:

So this is what I created. Here’s how it works:

First, let’s say I want to generate a social card image for the URL at https://capture.the.spacet.me/. As an API consumer, I would: 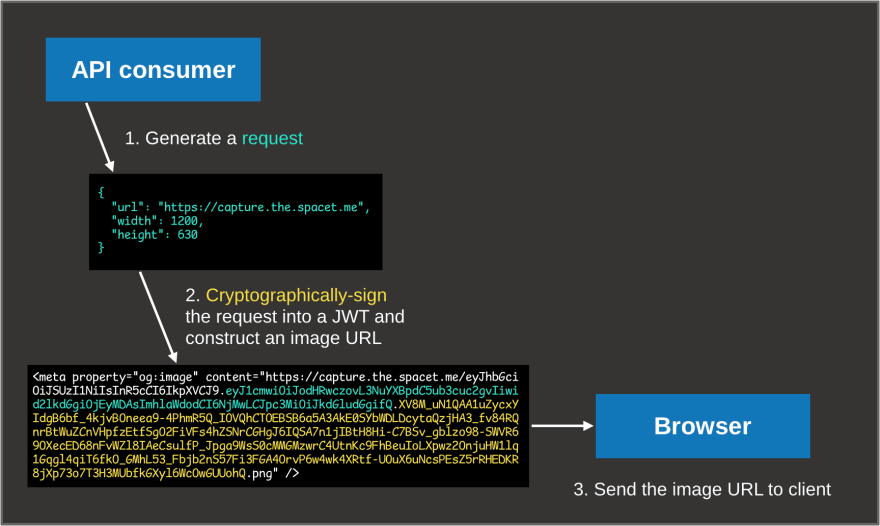 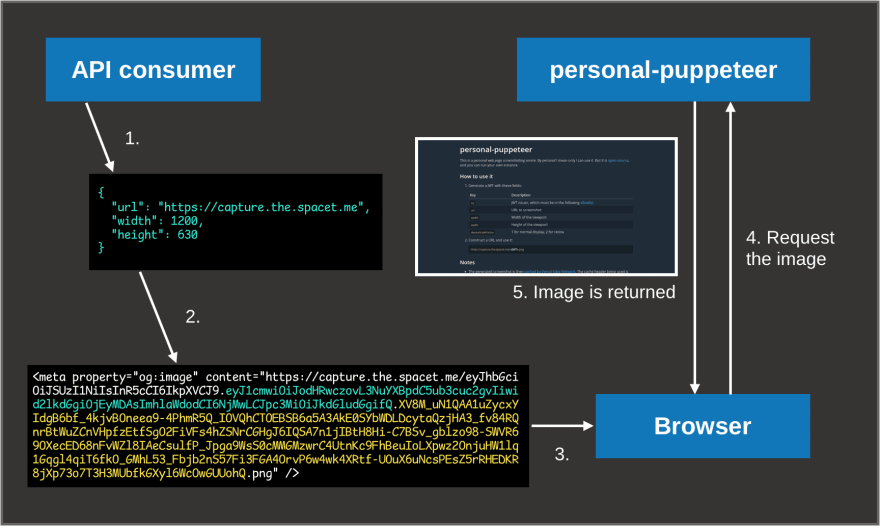 The service maintains a list of tenants which are allowed to use the service. This allows the service to be reused in multiple projects without them having to share the same secret key. 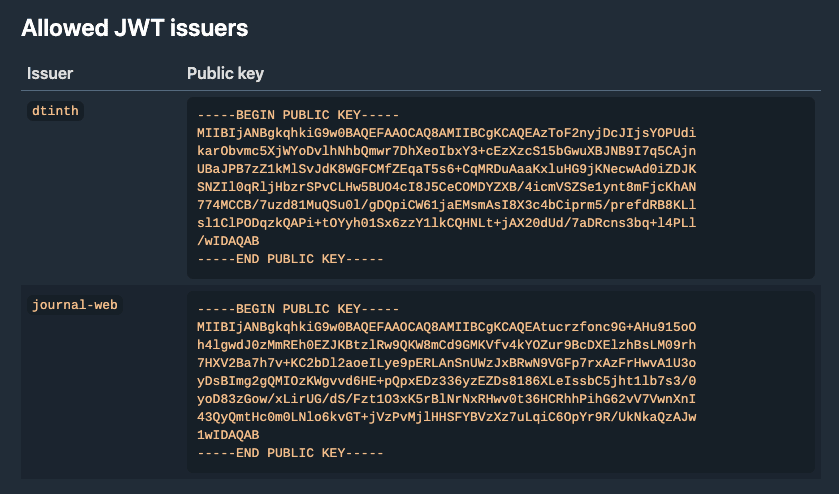 I was able to quickly build the first version of this service thanks to Vercel’s Edge Network and Serverless Functions. 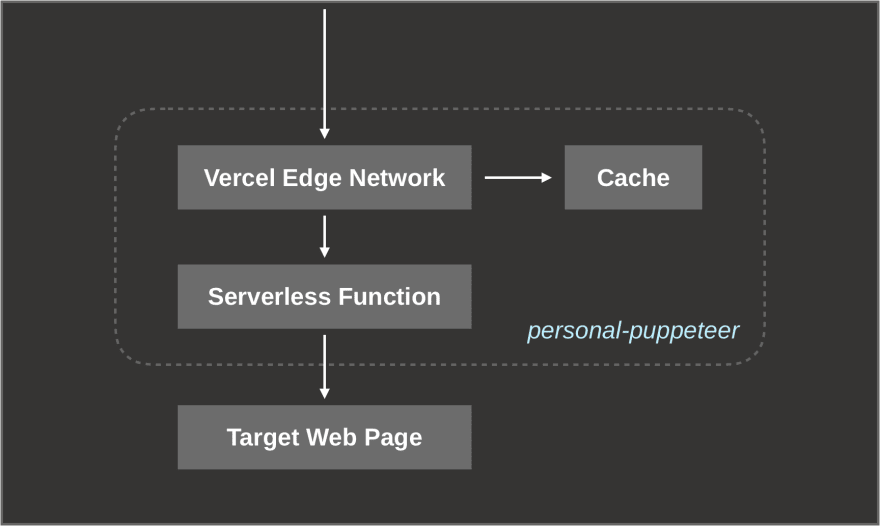 The first time a request is received: 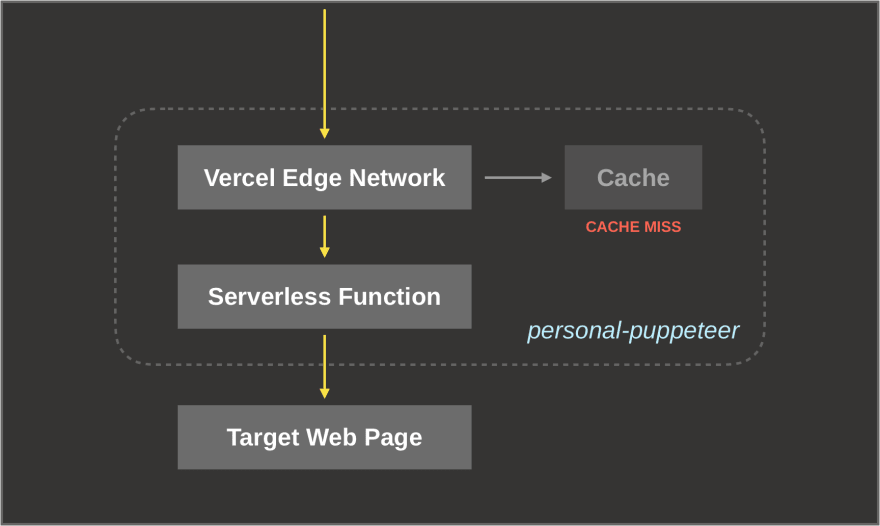 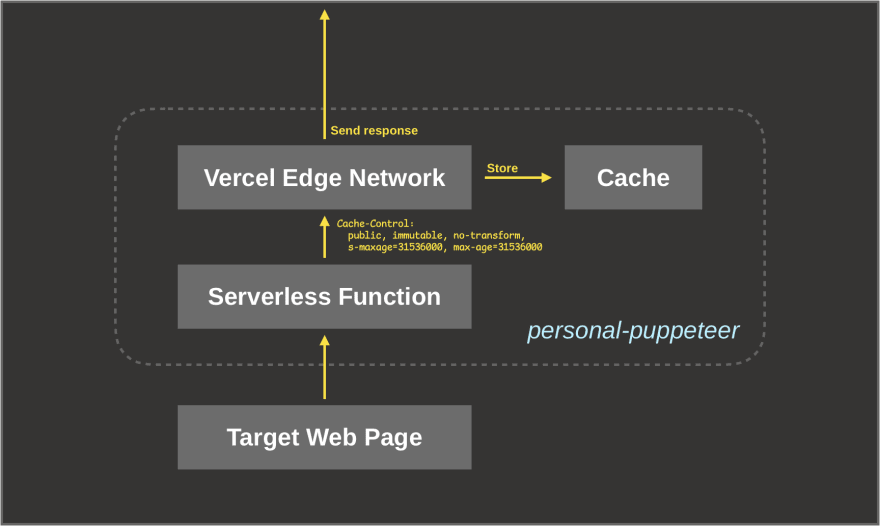 The next time the request is received, it would be served by Vercel’s cache. 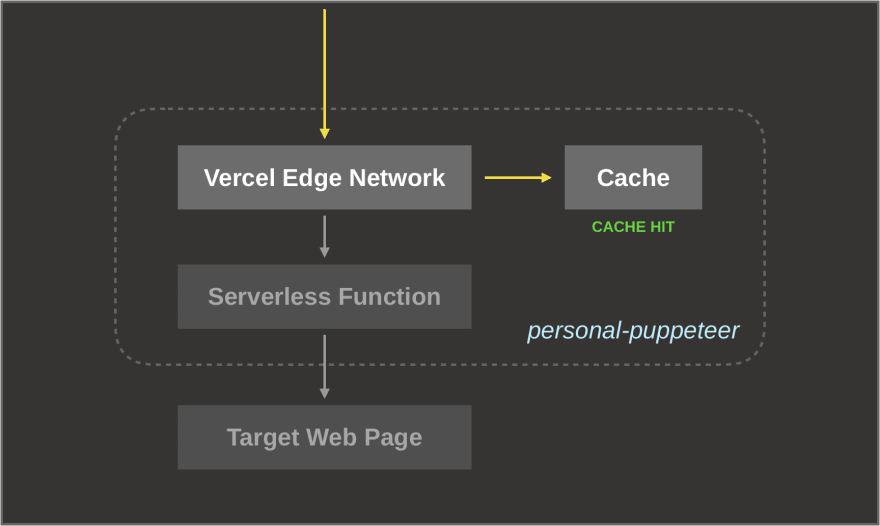 Automatic social image generation for all my web projects

If I create a web project or a blog post, but don’t want to spend the time crafting an og:image for each page, I can just use personal-puppeteer to generate a default og:image from the webpage’s screenshot. 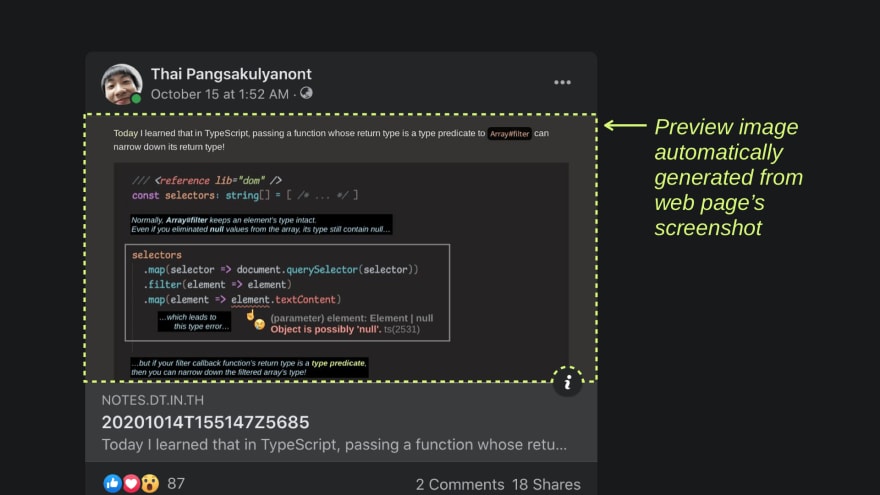 Although it may not look as good as a handcrafted image, I think this is still way better than using a generic image or a profile picture as a default preview image.

So far, I am doing this for:

By using data: URLs, an HTML page can be embedded in the JWT.
This can be useful when I want to create a chat bot that can generate infographics.

The URL can be embedded into other websites to provide an auto-updating screenshot. 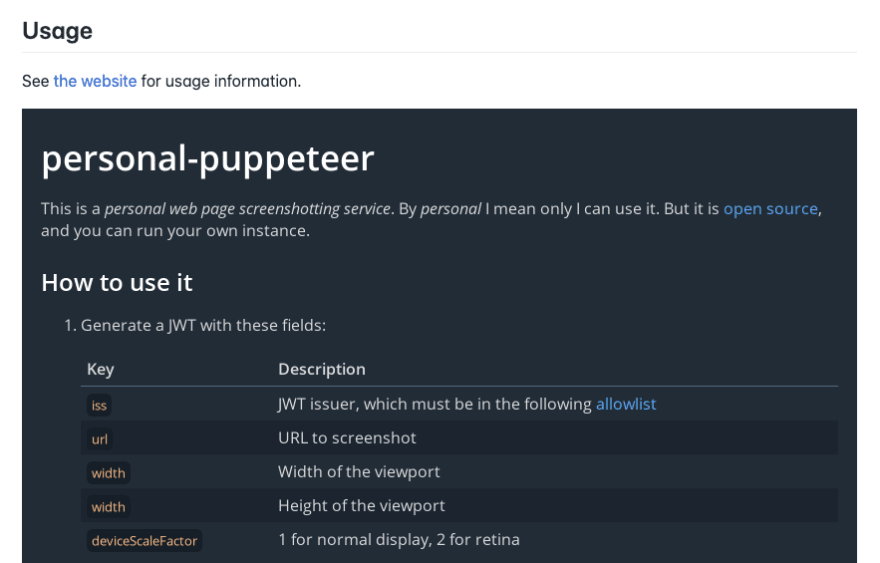 This project is open source, so you can run your own instance too!

A personal web page screenshotting service. Basically, it exposes an API that I can use to generate screenshot of any URL.

This is a personal web page screenshotting service. Basically, it exposes an API that I can use to generate screenshot of any URL By personal I mean that only I can use it. It is secured with JWT. But it is open source, and you can run your own instance.

It is deployed to Vercel and is inspired by Vercel’s Open Graph Image as a Service The main difference is that this service is designed to be reusable across many use cases. It can capture arbitrary URLs and run arbitrary code It is multi-tenant. I can reuse this service without having to share secrets. Note: Do not send pull requests to this repository to add a new tenant. Instead, please deploy personal-puppeteer to your own account.

How to Create Multiple Environments with Vercel (Zeit Now) and Next.js?