Animation is a great way to bring your websites to life, but animation in CSS can be a bit confusing. This is where this guide comes in! So without further a-do, let's dive in.

A Primer on Animation

Disclaimer: I'm no expert on animation, so take this section with a grain of salt; and if you find any errors in my explanation, feel free to correct me 😃

a method in which figures are manipulated to appear as moving.

Animation is done by showing images sequentially as such high speeds that they appear to be moving to the human eye.
this can be done in a number of ways, one of the most well-known ways is frame-by-frame animation, where every frame is drawn by hand.

In CSS, things are a little bit different. We don't draw the frames, rather we tell the browser how to draw the frames for us; this is done by two properties: transition and animation.

The transition property is made of 3 required values and 1 optional value.

You can also set each property on its own.

transform and opacity are the safest bet you have when it comes to animation performance in CSS. If you would like to learn more about performant animations you can read this article

And if you want to learn more about transforms, you can read this article

Although keep in mind that transforms don't alter the layout of the page (that's why they're performant), which means that the parent element won't change in size, nor will the rest of the document shift. So be wary of that when using transforms.

The transition property is the property you would like to transition. For example: color, width, or transform. It can also be all to encompass all possible properties, but I would generally advise against this for the sake of predictability, clarity, and performance.

The amount of time the transition will last for. Expressed in seconds s or milliseconds ms.
Note: 1s = 1000ms

Timing is an extremely important part of animation. It defines how things move from one state to another.

In the real world, things don't move at perfectly linear pace; things ease in, ease-out, and move in all sorts of wacky ways.

What are Timing Functions?

Timing functions are expressed as a cubic-bezier, A thing I know very little about. thankfully there are tools online that allow you to make and visualize these functions. CSS also includes five ones out-of-the-box! they're linear, ease, ease-in, ease-out, and ease-in-out; and they should enough for 90% of your animation needs.

Delay is the amount of time before the transition occurs. Expressed in seconds s or milliseconds ms.

this causes our navbar to instantly appear as soon as our user clicks our button. But we may want to animate our navbar expanding; in this case we would define a transition. But how do we do that?

If we want to animate our navbar, we would do something like this:

This would cause the navbar to gracefully expand when activated. Making it more visually appealing. 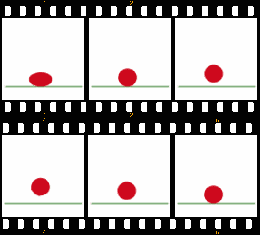 animation defines a... you guessed it! animation. And it works largely in the same way as transition. But there a few key differences.

Unlike transition, which triggers when a property updates; animation is active from the moment it's applied.

Also, instead of taking a transition-property, animation takes something called keyframes. and we will discuss those soon.

You can also set each property on its own.

A key frame (or keyframe) in animation and film-making is a drawing or shot that defines the starting and ending points of any smooth transition. These are called frames because their position in time is measured in frames on a strip of film or on a digital video editing timeline. A sequence of key frames defines which movement the viewer will see, whereas the position of the key frames on the film, video, or animation defines the timing of the movement.

In CSS keyframes are defined using the @keyframes at-rule. and is a collection of CSS properties associated with specific points in the animation timeline, like 25% from, or to.

If a set of keyframes does not have a starting state (0% or from). whatever state they were in before the animation starts will be their starting state.

Therefore, keyframes define a general sequence of states, but does not define their duration, flow, or direction.

The spin keyframes dictates that the element will start at 0 degrees of rotation of rotation, and end at a full 360 degrees.

How many times the animation repeats. It can be a number or infinite to make it repeat indefinitely.

sets how a CSS animation applies styles to its target before and after its execution. This property is outside the scope of this article.

sets whether an animation is running or paused.

It has two values. running and paused. pretty self explanatory.

This property is can be useful for manipulating animations with JavaScript.

The animation we defined would make the spinner rotate a full 360 degrees in 1 second and repeat an infinite number of times. effectively creating a spinning animation.

And that concludes this article. Man this was a doosey to write. 😅 Also I'm sure I made a few mistakes somewhere in there so any comments and suggestions are welcome. 😊

Drumstickz64
How I make my GitHub Profile Interactive
#javascript #beginners #tutorial #css
What was your win this week?
#discuss #weeklyretro
Can Someone Explain Git Push and Git Pull?
#discuss #anonymous #career

Once suspended, drumstickz64 will not be able to comment or publish posts until their suspension is removed.

Once unsuspended, drumstickz64 will be able to comment and publish posts again.

Once unpublished, all posts by drumstickz64 will become hidden and only accessible to themselves.

If drumstickz64 is not suspended, they can still re-publish their posts from their dashboard.