This is a guide with the goal of laying down foundational knowledge that is required when speaking about building REST API's. The following topics are covered:

The main points that I would like to summarize with regards to REST are listed as follows:

This sections covers REST essentials. The goal of this section is to make the reader comfortable with the notion of REST. It is also intended to provide the minimum required theory to start talking about REST and building HTTP services that incorporate a REST architectural style.

REST (REpresentational State Transfer) is an architectural style that was defined by Roy Thomas Fielding in his PhD dissertation "Architectural Styles and the Design of Network-based Software Architectures".

The name “Representational State Transfer” is intended to evoke an image of how a well-designed Web application behaves: a network of web pages (a virtual state-machine), where the user progresses through the application by selecting links (state transitions), resulting in the next page (representing the next state of the application) being transferred to the user and rendered for their use.

If you're someone that builds HTTP services for distributed systems, then understanding and applying REST principles will help you build services that are more:

Fielding describes REST as a hybrid style that is derived from several network-based architectural styles (Chapter 3) combined with a number of additional constraints. In this section, the six architectural constraints as applied to REST are discussed. The key takeaway is that these constraints encourage design that will result in applications that easily scale, are faster, and more reliable.

The 6 architectural REST constraints are as follows:

A guiding principle of Client-Server is the separation of concerns. It's all about achieving high cohesion and loose coupling in order to improve portability and flexibility. It also allows systems to evolve independently of each other. As can be seen by the diagram below, a Client sends a request, and a Server receives the request.

A Server must not store any state during communications. All information required to understand a request must be contained within the Request. Therefore, every Request should be able to execute on its own and be self-contained. Also, a Client must maintain it's own state. The benefit of this approach is as follows:

A disadvantage of this approach is that it decreases network efficiency because the Requests need to contain all the information required for that interaction. The more information, the larger the Request size, and therefore the more bandwidth is used. This will have a negative effect on latency as well.

The primary reason for the Cache constraint is to improve network efficiency. As noted above in the Stateless constraint, the size of Requests can decrease network efficiency due to the need for more bandwidth. Through caching, it is possible to reduce and sometimes remove the need for a Client to interact with the Server. In other words it's possible to reduce and/or eliminate the need for Requests. Therefore, the Cache constraint states that a Server must include additional data in the response to indicate to the client whether the Request is cacheable and for how long. A network Client can then decide the appropriate action based on provided cache information in Response.

Caching can improve performance. However, it comes with a number of disadvantages that impact the reliability of the system. For example:

At the core of this constraint is the principle of generality which is closely related to the principle of anticipation. It stems from the fact that it is impossible to build the exact required interface for all network clients of a server service. Therefore, by providing a generic interface, one is able to provide a simplified interface with higher visibility that is able to satisfy the requirements of more clients. A disadvantage of this approach is that because the interface is so general, one is not able to satisfy specific client requirements. In other words, providing a generic interface can lead to a sub-optimal interface for many clients.

There are four additional constraints that form part of the Uniform Interface and are listed as follows:

The key principle of this constraint is that the Client cannot make any assumptions that it is communicating directly with the Server. This constraint relates to the Client-Server constraint (discussed above) in such a way that Client and Server are decoupled. Therefore the Client makes no assumptions about any kind of hidden dependencies and this enables us to insert components and entire sub-systems between the Client and the Server. This allows one to add load balancers, DNS, caching servers and security (authentication and authorization) between Client and Server without disrupting the interaction.

Layering allows one to evolve and improve ones architecture to improve scalability and reliability ones system.

This is an optional constraint. The key concept about this constraint is that when a Client makes a request to a resource on a Server, it will receive the resource as well as the code to execute against that resource. The Client knows nothing about the composition of the code and only needs to know how to execute it. Javascript is an example of where this is done.

The Richardson Maturity Model is a heuristic maturity model that can be used to better understand how mature a service is in terms of the REST architectural style. 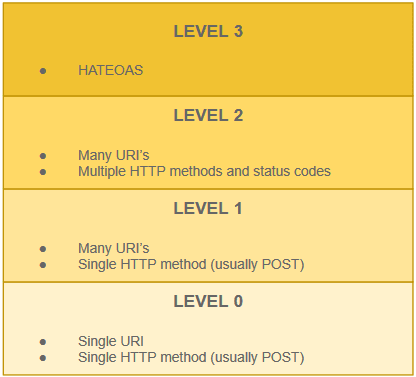 Services at this level are described as having a single URI, and using a single HTTP verb (usually POST). This is very characteristic of most Web Services (WS-*) in that this services would have a single URI accepting an HTTP POST request having an XML payload.

Services at this level are described as having many URIs with a single HTTP verb. The primary difference between Level 0 and Level 1 is that Level 1 services expose multiple logical resources as opposed to a single resource.

Services at this level are like Level 2 services that additionally support Hypermedia As The Engine Of Application State (HATEOAS). Therefore, representations of a resource will also contain links to other resources (the actions that can be performed relating to current resource).

When thinking about the RMM applies to your API, please refrain from thinking in terms of having a Level 2 or Level 3 REST API. According to this model, an API cannot be called a REST API unless it at least satisfies a Level 3 of the RMM. Therefore, it would be better to think of ones API as an HTTP API that satisfies a Level 1,2, or 3 on the RMM.

I have developed a simple Http Api to demonstrate some of the concepts that I discussed in Part 1 of this guide.

I've also started another project that I plan to use to demonstrate various technology concepts like REST API's.

A playground for demonstrating concepts such as architecture, design, dotnet core, typescript, react, database and docker

In this example, we are going to define contracts for 3 types of resources:

There are 5 important aspects to defining a contract:

The naming guidelines seem to suit naming resources very well. However, what happens when one needs to name something that is more a behavior than a resource? For example, let's say we want to compute the average rating for a movie. How would we structure our naming?

I don't think there is 100% consensus on what the correct naming strategy is for a scenario such as this one. However, when faced with defining a contract for something that feels more about behavior than resources, I like to define contracts based on the outcomes of those behaviors. Therefore, for the example above:

But what if we try to define a contract for a calculator? This is clearly an example of where defining a contract around a behavior is very difficult and "unnatural" to REST. The reason why it feels unnatural is because REST is an architectural style for describing web architecture. So if you imagined every endpoint as a webpage, then clearly the behaviors for a calculator don't map very well. My suggestion is to use an alternative technology like gRPC if you are building API's that are more about behavior than resources.

In this section, a list of commonly used status codes is provided. Status codes help convey meaning in client/server interactions. They also help achieve consistency in terms of defining a contract.

Implies the type of representation (Media Type) that will be used for request and response. The Media Type is specified in header of request. Two popular Media Type formats that are used with Http Api's are:

Typically, I would support at least the two aforementioned formats. For any media type format that is not supported, the Api should return a 406 Not Acceptable status code.

To illustrate some of the topics that have been discussed, I created an example project called Ranker.

In the following sections I provide more detail about the project and how to get started.

Although the focus of this example project is to illustrate an implementation of REST, I decided to provide a basic architecture to also illustrate a good separation of concerns so that the Api layer (Controllers) are kept very clean.

I've chosen a architecture based on the Onion Architecture. Below, I provide 2 different views of what equates to exactly the same architecture. 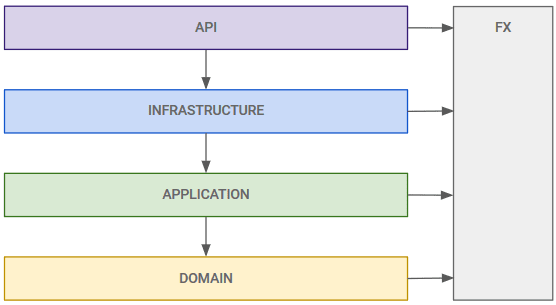 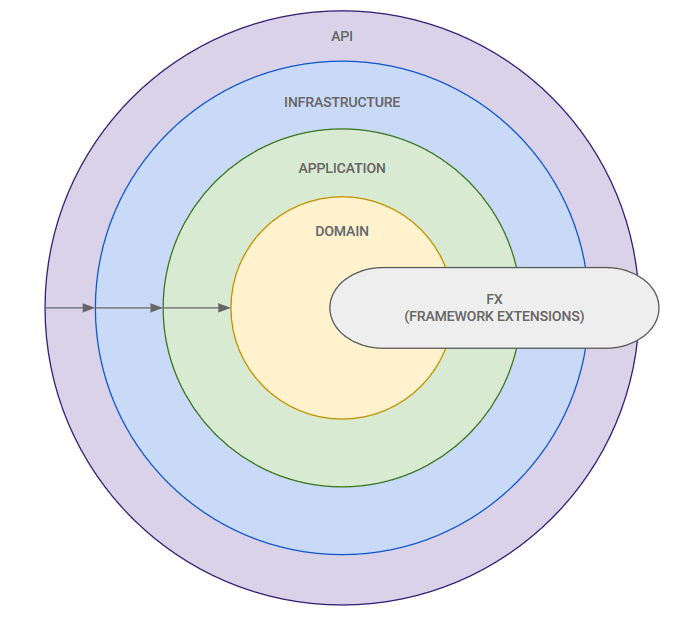 This API has been implemented as a number of HTTP services based on REST guidelines. The API itself is based on an MVC (Model, View, and Controllers) architecture. The Controllers are essentially the public facing API contract.

Primary Responsibility: Provide the core of the system an interface to the "world".

This layer is all about defining and configuring external dependencies such as:

This layer is typically where you would find "Application "Services".

All domain logic relating to domain models and domain services are handled in this layer.

The API has been implemented with the Open Api Specification (OAS). Once you have the API up and running, you can browse to the following Url to get access to the OAS Swagger Document.

For this project, any endpoint returning a collection of items has been implemented with paging. Use the following query parameters to control paging:

Pagination has been implemented in two ways for this example project.

I've chosen to keep ordering parameters very succinct. Therefore, ordering for a collection of resources may be executed in the following ways:

Notice that we use comma separated values for the order.

I have implemented some basic client side caching behavior.

The following endpoints use response caching where the cache expires after 10 seconds.

The following endpoint uses caching with an ETag.

The following endpoints have been implemented to return links as part of response.

And for a collection of users (with links), we can use the request below. Please take note of the paging information that is returned as part of response

I have developed and tested Ranker on the following Operating Systems.

Ubuntu is an open source software operating system that runs from the desktop, to the cloud, to all your internet connected things.

In addition to developing Ranker on Windows 10, I have also tried and tested Ranker using Windows Subsystem For Linux. Specifically, I have used [WSL-Ubuntu]. See more about WSL below.

Before getting started, the following frameworks must be installed on your machine:

Run the API from the command line as follows: