I'm one of the CPAN testers, a bunch of people who test everything that gets uploaded to the CPAN. We test with multiple different builds of perl on multiple operating systems and different hardware platforms, and send reports of failing tests. When I'm wearing my Author Hat as opposed to my Tester Hat I very much appreciate test failure reports from platforms I don't have access to, or which are generated using perl builds with features I hadn't considered. I test on 5 different operating systems (6 if you count 32 bit x86 and 64 bit amd64 Linux separately) and 40 different builds of perl.

I mostly test in virtual machines, running on a single Intel Mac Mini. Using VMs means I don't need multiple noisy real machines of course, but it also makes them all easier to manage.

Until very recently I used Virtualbox for this, mostly because back when I started running VMs on a Mac it was the best free game in town. But it's not the most efficient and I have now switched to the much better, and still free, UTM, which is a simple GUI wrapper around the notoriously hard to configure QEMU, patched to use Apple's hypervisor. 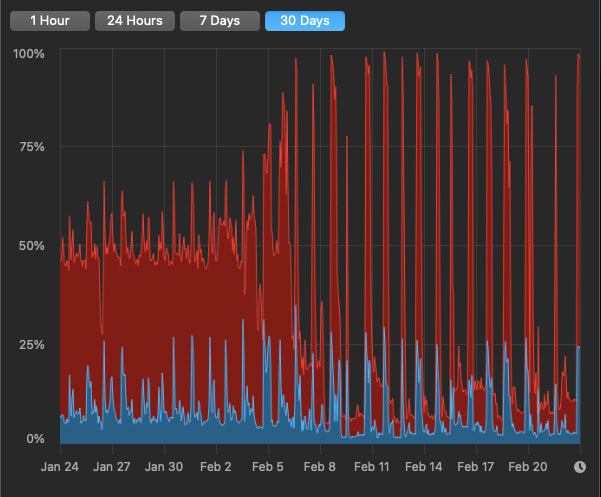 This chart shows CPU usage over the last month. The first half is when I was using Virtualbox. Running all those test builds usage was a fairly constant 50% of what was available. The VMs could keep up with the workload, but there was little capacity for more despite all that unused CPU. No matter how many CPUs I allocated to the various VMs, it just wouldn't use all the resources. It's very clear in the chart when I started migrating VMs from Virtualbox to UTM. CPU usage starts spiking much higher - indeed, it reaches 100% and stays there when the VMs test a batch of uploads - but then drops to almost zero when that batch has finished. The work is done faster. 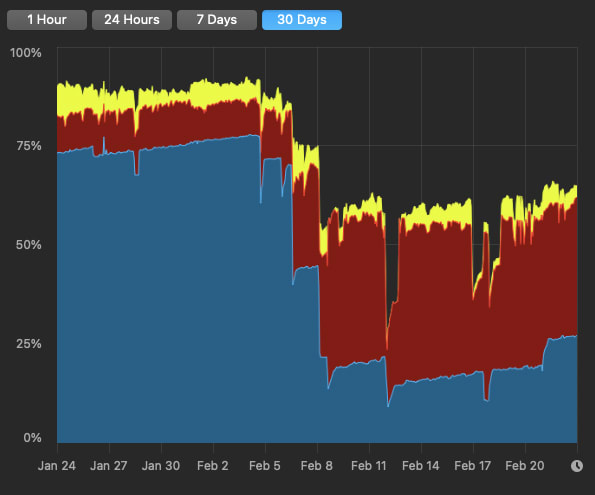 Virtualbox is also a memory hog. This chart shows that I couldn't really add any more Virtualbox VMs, as there was little memory left. And worse, most of what was in use (the blue section of the chart) is "wired" memory, in kernel-space. Yes, most of the memory Virtualbox was using was being used by its kernel extension. It is again clear when I started migrating VMs to UTM. Memory usage falls off a cliff, and "wired" memory usage falls even faster, with a far greater proportion of the lower total being just normal user-space memory (the red section of the chart).

Now that I've got back all that wasted memory I am, of course, beginning to fill it with more VMs, this time for development as opposed to testing. I have recently become a larval stage Rustacean and have dived headlong into reporting obscure platform-specific bugs.

But you can see from my dock that I've still got three Virtualbox VMs running. Why?

While UTM is much better at resource usage, it's not perfect. Virtualbox seems to emulate more of a system instead of passing it through to the hypervisor and so is better for running more unusual OSes. I have two VMs there running Illumos which I have yet to figure out how to boot in UTM. A problem that I think is related to UTM's greater use of the hypervisor is that you can't suspend and resume VMs that use it instead of being emulated, so I've still got a few VMs hanging around in Virtualbox which spend most of their time suspended. Finally, what stops me from using UTM at work is that you can't use it as a Vagrant provider. This is incredibly annoying, as the lack of a decent virtualization application makes the otherwise very nice M1 Macs nothing more than pretty toys. I expect that this glaring lack will be fixed within the next couple of years.

WSL2 plus Virtual Machines on Windows 10

How to uninstall the GlobalProtect App from Macbook

David Cantrell
Perl grey-beard primarily interested in QA, and a larval-stage Rustacean. I've been computering for longer than most of you have been alive.
Automatic cross-platform testing: part 3: MacOS
#testing #cirrusci #ci #macos

Once suspended, drhyde will not be able to comment or publish posts until their suspension is removed.

Once unsuspended, drhyde will be able to comment and publish posts again.

Once unpublished, all posts by drhyde will become hidden and only accessible to themselves.

If drhyde is not suspended, they can still re-publish their posts from their dashboard.

Once unpublished, this post will become invisible to the public and only accessible to David Cantrell.

Thanks for keeping DEV Community safe. Here is what you can do to flag drhyde:

Unflagging drhyde will restore default visibility to their posts.